A selection of Ghenie's paintings from before 2009 and a body of new work, including some collage paintings. Also, he is for the first time constructing his imposing Dada Room, a benchmark work in which elements from previous work merge. Ghenie's dense and tactile paintings with their complex structure offer a contemporary vision of major political narratives and such fundamental, universal topics as the abuse of power, exploitation and oppression, and also of a personal, individual human struggle. 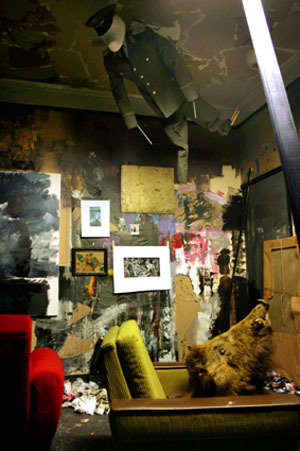 The Romanian artist Adrian Ghenie (Baia-Mare, 1977) is showing a selection of paintings from before 2009 and a body of new work, including some collage paintings. Also, he is for the first time constructing his imposing Dada Room, a benchmark work in which elements from previous work merge.

Ghenie’s dense and tactile paintings with their complex structure offer a contemporary vision of major political narratives and such fundamental, universal topics as the abuse of power, exploitation and oppression, and also of a personal, individual human struggle. His critique is never direct, however, but always takes a roundabout route. Ghenie obscures all his historical and political references by fusing them with personal memories, film references, clichés from the entertainment industry and elements from art history. This gives rise to a continuous metamorphosis between fact and construction, a grid of fragmented stories on collective and individual catastrophes. Ghenie depicts a journey through the darkest realms of human existence, where a glimmer of hope nevertheless persists.

Historical Memory
In a series of paintings we discern a clear but elusive political undertone. Ghenie offers us a particular view, but takes the fusion of historical and personal references to such an extreme that the viewer can no longer distinguish them. In The Nightmare (2008), Ghenie is visited by the ‘taboo’ Hitler while in the uncontrollable zone between dreaming and waking. What we see is the dream of an individual who cannot free himself from the collective memory. In addition, this painting contains an implicit statement on Ghenie’s artistic practice. He portrays figures who embody a political taboo or a horrific past as ‘characters’ or dream figures, recognisable yet at a distance. Or else he emphasises their hidden shortcomings, such as the traces of excessive drinking in the portrait of Göring, the mass-murderer, in The Collector (Study) (2008). These figures are often anonymous, without a face, or, as in Göring’s case, they are used as a seemingly neutral archetype. For Ghenie they are part of the huge stock of images in our collective memory, which he uses as artistic material. But there are also gaps in the inexhaustible stream of images at our disposal. That Moment (2007) is Ghenie’s attempt to visualise in his own way a universally known moment in history of which there are no pictures, the suicide of Hitler and Eva Braun.

Ghosts from the Past
In the The Devil 1 (2010) we see Ghenie in his Dada Room, sickened by the figures and intellectual obsessions that pursue him. But they fascinate and inspire him too. Marcel Duchamp, for example, portrayed in Duchamp’s Funeral (2009) and Duchamp (2009), haunts Ghenie’s thoughts as the arch-enemy of painting. Selfportrait (2009) is a teasing reference to Ghenie’s father, who imitated Elvis on the basis of no more than a vague echo of 50s America. The ghost of Ceauşescu flits around too, as a memory, inseparably associated with the history of Romania and the artist’s identity. The title of the Pie Fight (2008-9) series in its turn reminds the viewer of the slapstick tradition of the first popular black and white films of the early twentieth century, but above all conceals a critique of man’s intrinsically dark side, with references to the Holocaust used purely as examples, as icons for all instances of extreme human humiliation.

Atom Bomb
In his recent paintings Ghenie incorporates collages which he cements in with paint. The added layering and the more abstract elements give these images an increased complexity and often force the viewer to revise his spontaneous initial interpretation. Ghenie’s recent work, as Selfportrait as a monkey (2010), is constructed almost entirely around his fascination for the Cold War, and especially the atom bomb. He plays with the absurd, sick image of the atomic tests: an artificial town in the Nevada desert, meticulously and realistically built with the aim of totally destroying it, with in the background the cameras that reveal the spectacle and what is almost an entertainment aspect. To Ghenie, the image of the atom bomb is a modern variant of such things as the crucifixion of Christ. Only a few people witnessed it, but over the centuries the event has been endlessly depicted and reinterpreted. And between the lines of the mediaeval illustrations and mighty Renaissance paintings of the crucifixion, we actually read a history of Europe. In this series, Ghenie’s aim is to show that the conflicts underlying the Cold War, symbolised by the atom bomb, remain dormant and still define world politics today. What Ghenie is suggesting here is an alternative setting for our collective memory.

Dada Room
Ghenie’s Dada Room (2010) is at the heart of the exhibition and is where it starts and finishes. This room houses a synthesis of the substance of his paintings and at the same time his tactile, ‘accidental’ and material way of working are thoroughly thought through. The Dada Room is an almost life-sized model of the First International Dada Fair, which took place in a Berlin living room in 1920. The position of the paintings and objects is retained, but they take on a new purpose. According to the anti-logic of dada, autobiographical memories and artistic connotations merge with historical references – which here too are always discrete, for example in the authoritative presence of the German Shepherd dog, and indirectly, for example in the image of the atom bomb. Ghenie’s study of materiality, texture and surface reaches a climax in the Dada Room: painted walls turn into a thick substance on the floor, while an abundant use of paint makes the room heavy and absorbs the objects there. Ghenie experiments with the question of the extent to which a three-dimensional installation can still be perceived as a painting. After all, looking is also a way of framing: he will be starting on a new series of works based on photos of various compositions in the room. The Dada Room is in line with his previous work, but it is also a set for new possibilities. In this way the Dada Room offers an intimate glimpse into Ghenie’s studio and lifts a corner of the veil to reveal the nature of his artisthood.

S.M.A.K.
Citadelpark B-9000 Gent
Openinghours Museum: Closed on Monday
Tuesday through Sunday from 10 am to 6 pm
Closing time cash-desk: 30 minutes before closing of the museum
25 December and 1st January: museum closed
24 and 31 December: museum closed at 4 pm
Entrance fees € 6: individual visitor
€ 4: groups from 15 persons, under-25s, over-60s, students
€ 1: young people under the age of 26