Comprised of research material, photography, architectural models, video/film works, and a series of books, the exhibition brings together three core projects (De-Parcelization, Return to Nature and The Red Castle and the Lawless Line) to recast the largely discredited term decolonization. 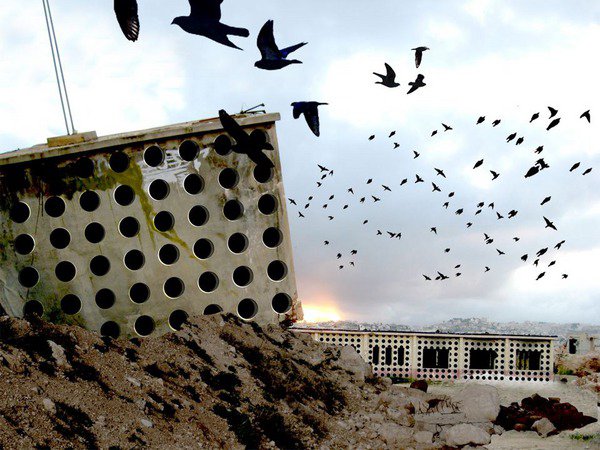 REDCAT is pleased to present the first U.S. exhibition by Decolonizing Architecture.

Initiated by Alessandro Petti, Sandi Hilal and Eyal Weizman in 2007, Decolonizing Architecture is a project set up as a research studio and residency program in Beit Sahour, Bethlehem. The studio examines architecture to articulate the spatial complexities of decolonization, taking the conflict over Palestine as their main case study. Collaborating with a range of individuals including artists, filmmakers, activists, academics, and non-profit organizations to embark on a broad spectrum of critically-engaged and highly-focused research projects, the studio works within a spatial reality that Weizman describes as "the politics of verticality" in his riveting study of the occupied territories titled Hollow Land. Offering new possibilities for insight and engagement, the studio aims to inaugurate an "arena of speculation" that incorporates varied cultural and political perspectives as interventions within the political, legal, and social force fields that exist there.

For REDCAT, Decolonizing Architecture will develop an exhibition that builds on their work over the last three years. Comprised of research material, photography, architectural models, video/film works, and a series of books, the exhibition brings together three core projects (De-Parcelization, Return to Nature and The Red Castle and the Lawless Line) to recast the largely discredited term decolonization and to consider how the transformation of financial, military and legal infrastructures in the area can lead to what the architects have called "the construction of counter apparatuses that find new uses for the abandoned structures of domination."

De-Parcelization deals with a fundamental question of how Israeli-built structures can be reused, recycled or re-inhabited by Palestinians. Taking Psagot in Ramallah, an Israeli settlement in the West Bank, as a case in point, the project turns the "geography of occupation" against itself by superimposing pre-settlement maps. Return to Nature attempts to transform former army barracks in Bethlehem into a bird observatory for migrating birds, working with the Palestinian Wildlife Association. Their most recent project The Red Castle and the Lawless Line takes the 5-meter band, the literal ink line drawn on the map of the 1993 Oslo Accords, as extraterritorial space unlegislated by Israeli or Palestinian control, and as a critical site for architectural appropriation and intervention.

Assembled together for the first time at REDCAT, the three projects represent the visual products of research initiated by the studio and its collaborators including Michael Baers, Amina Bech, Suzanne Harris-Brandts, Nadav Harel, Armin Linke, Francesco Mattuzzi, Sara Pelligrini, and Diego Segatto. The studio was recently re-established as the Decolonizing Architecture Institute to capture its full range of activities and programs.

In conjunction with the exhibition, a panel co-presented with the MAK Center for Art and Architecture at the Schindler House will convene a group of individuals from diverse disciplines and backgrounds, including Iain Boal, Teddy Cruz, Alessandro Petti, Geoff Manaugh and Kimberli Meyer on Wednesday, January 26 at 7:30pm at REDCAT.

Decolonizing Architecture was originally conceptualized and its pilot stage produced in dialogue with Eloisa Haudenschild and Steve Fagin, partners in the haudenschildGarage, Spare Parts projects.

The exhibition is funded in part with generous support from the Nimoy Foundation, the Graham Foundation for Advanced Studies in the Fine Arts, and the haudenschildGarage.

Redcat
631 West 2nd Street - Los Angeles
Hours: Tuesdays through Sundays from noon to 6:00pm or until intermission. It is closed Monday and major holidays.
Admission free