The Museum of Modern Art's Performance Exhibition Series continues with Performance 9: Allora & Calzadilla, which brings Stop, Repair, Prepare: Variations on Ode to Joy for a Prepared Piano (2008). Blending sculpture and performance, the artists have carved a hole in the center of an early twentieth-century Bechstein piano, creating a void in which the performer stands to play the Fourth Movement of Beethoven's Ninth Symphony, usually referred to as 'Ode to Joy.' 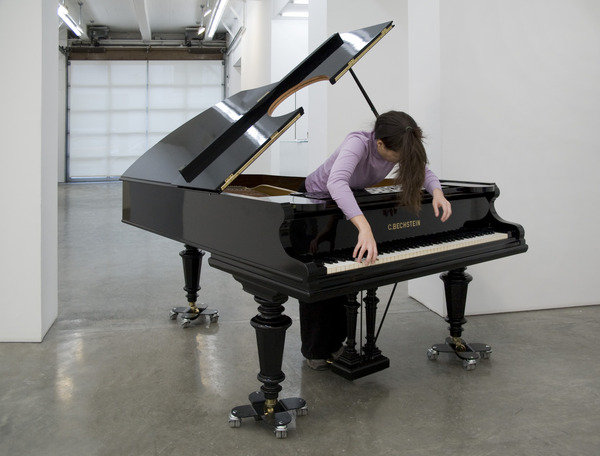 The Museum of Modern Art’s Performance Exhibition Series continues with Performance 9: Allora & Calzadilla, which will bring Stop, Repair, Prepare: Variations on Ode to Joy for a Prepared Piano (2008) to the Museum’s Donald B. and Catherine C. Marron Atrium for performances throughout the day, from December 8, 2010, through January 10, 2011. The piece, which was acquired by MoMA in 2009 and is being publicly performed in the Museum for the first time, was created by the artist duo Jennifer Allora (b. 1974) and Guillermo Calzadilla (b. 1971), who have been named the United States representatives for the 2011 Venice Biennale.

Blending sculpture and performance, the artists have carved a hole in the center of an early twentieth-century Bechstein piano, creating a void in which the performer stands to play the Fourth Movement of Beethoven’s Ninth Symphony, usually referred to as “Ode to Joy.” For each 30-minute performance, the pianist will lean over the piano’s keyboard, playing upside down and backwards, while moving the instrument around the Atrium. These performances will take place hourly beginning at 11:30 a.m. each day. Performance 9: Allora & Calzadilla is organized by Klaus Biesenbach, Director, MoMA PS1, and Chief Curator at Large, MoMA, with Jenny Schlenzka, Assistant Curator for Performance, Department of Media and Performance Art, MoMA.

Allora & Calzadilla, who since 1995 have developed a complex artistic vocabulary utilizing films, installations, performances, and sculpture, consciously chose “Ode to Joy” in accordance with their general interest in the social, political, and cultural instrumentalization of music. The popular melody has long been invoked as the musical representation of humanist values and national pride, having been used in such ideologically disparate contexts as the Chinese Cultural Revolution, Ian Smith’s white supremacist Rhodesia, the Third Reich, and, more recently, as the official anthem of the European Union. Allora and Calzadilla’s altered version brings the composition’s deep contradictions and ambiguities to the surface.

Throughout the monthlong exhibition the work will be performed by the following pianists: Terezija Cukrov, Mia Elezovic, Amir Khosrowpour, Evan Shinners, and Sun Jun. A weekly schedule will be made available online at MoMA.org beginning December 8.

ABOUT THE ARTISTS
Allora & Calzadilla have been the subject of numerous solo exhibitions around the world, including presentations at Haus der Kunst and Kunstverein München; Stedelijk Museum, Amsterdam; San Francisco Art Institute; Whitechapel Art Gallery and the Serpentine Gallery, London; Kunsthalle Zurich; The Renaissance Society, Chicago; and Palais de Tokyo, Paris. They have also been included in group exhibitions such as “Prospect 1 New Orleans,” 2008; the eighth and ninth Lyon Biennales, 2005/2007; 2006 Whitney Biennial; 2005 Venice Biennale; How Latitudes Become Form, Walker Arts Center, Minneapolis, 2003, and Common Wealth, Tate Modern, 2003. In 2011 they will be the U.S. representatives at the 54th Venice Biennale. Allora & Calzadilla are based in San Juan, Puerto Rico, and are presently DAAD scholarship holders in Berlin, Germany.

ABOUT MoMA’S PERFORMANCE EXHIBITION SERIES
The Performance Exhibition Series is an ongoing series of exhibitions that bring installations documenting past performances, live re-enactments of historic performances, and original performance pieces to various locations throughout the Museum. The series began with the gallery exhibition Performance 1: Tehching Hsieh in January 2009, and will continue with Performance 10: The Identical Lunch by Alison Knowles in January 2011.

SPONSORSHIP
The Performance Exhibition Series is made possible by MoMA’s Wallis Annenberg Fund for Innovation in Contemporary Art through the Annenberg Foundation.

PUBLIC PROGRAMS:
Modern Mondays
Monday, December 6, 2010
Modern Mondays, a weekly program thabrings contemporary, innovative film and moving-image works to the public, provides a forum for viewers to engage in dialogue and debate with contemporary filmmakers and artists. On December 6, a conversation will be held with Allora & Calzadilla, discussing the artists’ interest in the social, political, cultural, and aesthetic implications of sound and music in their work.