The Office is a non-profit organization founded by Keti Shehu, Stela Suloti and Nerina Ciaccia. The first event is a group show with albanian and european artists hosted by different Institutions of the city. Also two conferences are proposed to be held by Tirana Art Lab (Albania) and Diogene_Bivaccourbano (Italy). 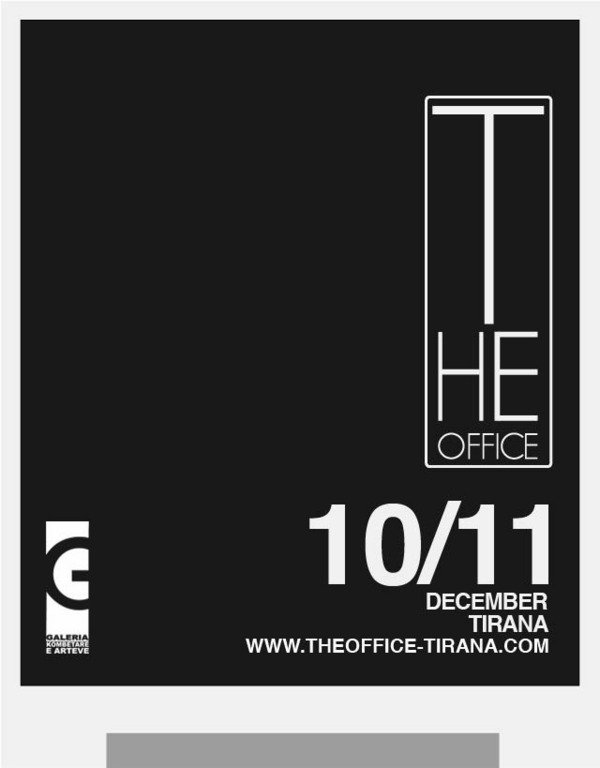 The future landscape that we imagine is one in which a network of companies, such as record companies, publishers, graphic designers, architects and artists, realize, through the modalities of co-participation, events and various projects in which everyone can put in place their creative and professional tools. In order to actualize the aforementioned scenario: The Office is proposing a pilot project to be implemented during the days of 10th and 11th December 2010, which sets in motion all the existing relationships between institutions devoted to culture, galleries, private and government institutions currently on the territory.
The question: "what is the role of culture and creativity today?" will serve as a background reflection for these two days.

A guest project in this event is “Fanatikë të artit“ (Art Fanatics) curated by Alban Hajdinaj, that presents two artists which lives and works in Tirana: Donika Ҫina and Gentian Shkurti.

In this two opening days, different Institutions of the city of Tirana will open their spaces to guest some of the works of this exposition. The Opera and Ballet Theatre will guest “Prova d’orchestra” (Orchestral Demonstration) of Driant Zeneli; The National Art Gallery “L’epoca delle passioni tristi“ (The age of sad passions) of Cosimo Veneziano.
During these two days, two conferences are proposed to be held by: Tirana Art Lab (Albania) and Diogene_Bivaccourbano (Italy).
The spaces in which will be exposed the over mentioned works, will open at the same day on Friday 10th of December from 16.30, beginning at the National Art Gallery.

The conferences will be held the next day on Saturday 11th of December at the space of The Office.
A special thanks for the collaboration and support goes to: the Ministry of Tourism, Culture, Youth and Sports,the National Art Gallery, and to the Opera and Ballet Theatre.

Barbara Ceriani Basilico (Varese, 1979) and Alessandro Mancassola (Vicenza, 1979) live and work in Milan and are currently looking for a studio in Nordkapp. They began working together in 2005 during their specialization in Visual Arts at the Academy of Fine Arts of Brera (Milan). Among others, they exhibited at the Merz Foundation in Turin, Bevilacqua La Masa Foundation in Venice, Careof in Milan, Neon in Bologna, 26cc in Rome, Grand Union in Birmingham, and at the National Art Gallery in Tirana.

Anne Holderied was born 1978 in Karlsruhe, Germany. She studied art education at th University of Arts and Design in Halle, Germany as well as at the Academy of Fine Arts in Vienna, Austria. Since 2008 she's working on different project at the Children museum, Paul Klee Centrum in Bern, Germany. On her web page there is a selection of her Exhibitions http://anneholderied.de/vita/vita/ that shows her participations in years.

Cosimo Veneziano was born in 1983 in Moncalieri, graduated from the Academy of Fine Arts in Turin, and lives and works in Turin. Amongst his recent projects is "The Possibility of an Island" (La possibilitÃ di un'isola) performed in the spaces of Barriera Association in Turin. The project, curated by Nerina Ciaccia, seen through the participation of the young citizens, is a new perspective on the area that documents urban changes through younger generations, and themes such as migration and the new citizenship. In 2009 he presented the draft of "Is Not Something"(Non Ã¨ cosa). For this work, the artist has invited various people to reflect on memories of things and the relations that we have with them. The installation was performed in the Anselmetti Chapel in Turin. The work of Cosimo Veneziano has been exhibited in numerous group exhibitions, among others, in 2010, the Unicredit Studio - The historical archieve: four interpretations curated by Francesca Pagliuca, Spazio Milan, Milan; The age of sad passions curated by Carlo Fossati, blank, Turin. In 2009 he participated at the Iceberg festival, in the public art section in Bologna. And in 2007 he also participated in the Leap Into the Void - Motions XXII.

Driant Zeneli was born in 1983 in Shkoder, Albania. He graduated at the Academy of Fine Arts in Macerata, Italy. Primarily he uses photography and video as means of documentation of operations that he realizes are often left to casualty. He has exhibited in several solo and group exhibitions in Albania and abroad such as in 2007 at the National Gallery of Arts in Tirana (Albania), in 2008 at the Dada Museum in Israel, and in 2009 at the Museum of Contemporary Art in Villa Croce, Genoa (Italy). In 2008, he won the Onufri International Contemporary Art Prize in Tirana (Albania) and in 2009 won the Young European Artist at Trieste Contemporanea (Italy).

The Office – Contemporary art space affair, is a non-profit organization founded in 2010 by Keti Shehu, Stela Suloti and Nerina Ciaccia. It represents itself as a design space, whose primary objective is to create functional interrelations between different fields of contemporary creative culture.

The structure of The Office is inspired by a synaptic network. It is imagined as a sustainable platform in which artists, critics, and creative’s can share their professional experiences and capacities and have the possibility to propose projects that investigates the social and cultural reality in Albania and Europe.