Encounters in Relational Geography. An multi-media exhibition that reflects contemporary cross-cultural and aesthetic developments whilst interrogating the ways in which we map our geopolitical landscapes, but also our artistic and cultural territories. It explores contemporary notions of identity and relativity by inviting a group of predominantly Eastern European artists to respond to the poetry and politics of place. 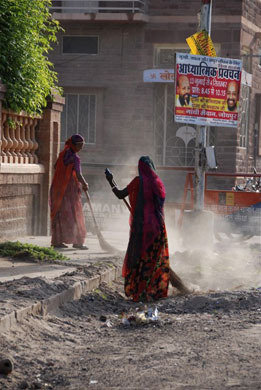 Curated by Richard Appignanesi, writer, theorist and editor of the art journal Third Text, Raising Dust is a provocative multi-media exhibition which explores contemporary notions of identity and relativity by inviting a group of predominantly Eastern European artists to respond to the poetry and politics of place.

It can be argued that the very idea of Europe is in itself a dislocation, a ‘nomadic horizon’ which responds differently to the shifting perspectives and desires of its inhabitants.
Each artist in Raising Dust has contributed work which addresses this proposition and foregrounds the urgency of creating an autonomous ‘space for life’ that overrides dominant mainstream distinctions. Three of the artists (of Indian, Cypriot and British-Pakistani descent) have extended the encounter with Europe even further east so as to question our ideas of what comprises the presumed integrity of this continent.

A central symbol and point of departure for Raising Dust is the broom. Appignanesi was invited to write a text on this humble everyday household object in response to a collection of locally handmade brooms at the Arna- Jharna Museum in Rajasthan, India, which has devoted a three-year programme to document this down-to-earth but essential implement. The broom, by its very nature, positions its user – the sweeper - in a constant routine battle against entropy, and at the same time paradoxically represents human endeavour and desolation, ingenuity and chaos. These conflicting forces of creation and destruction can be shown to have shaped human destiny and brought us to our current crisis of natural resources. Appignanesi also drew parallels between the confrontation with the stubbornness of matter and our own detritus, typified by the sweeper and the ambiguous condition of art. This set in motion the genesis of an exhibition idea that would develop these thoughts further in the wider configurations of relational geography. The first version of this show, titled Dust, Ashes, Residua and featuring seven Eastern European artists, was presented at Open Space, Zentrum für Kunstprojekte, Vienna, earlier in 2010.

For Raising Dust at Calvert 22, additional artists have joined the original participants in a response to the ‘broom’ text across a range of media. The broom remains as an emblem of basic human endurance in these artists’ reflections on waste and the geopolitical irregularities of Europe. Metaphorically it also represents a way of asserting that such issues cannot be swept under the carpet as it were, but need to be agitated, literally raising dust and watching how and where it settles.

Dumitru Budrala’s documentary film The Curse of the Hedgehog depicts the Băieşi Roma people in the uplands of Romania who survive precariously as traditional broom-makers. It is likely that these so-called ‘gypsy’ broom-makers and the Roma people generally dispersed across Europe originated in the Rajasthan region of India. The relational geographic link emerges from the striking images of broom-making and street sweeping in Jodhpur by the Bangalore-based photographer and filmmaker Navroze Contractor.

Vlad Nancă, a contemporary Romanian artist, wryly comments on post-Socialist consumerism by reworking the DIY ‘ready-mades’ (in this exhibition, a stand-up birch broom) that are commonly used to secure parking spaces in congested Bucharest. Another work is a 40k bag of cement attached to a flatbed trolley, its functional rationale turned comical, as if it were inviting us to hop on a building-site skateboard.

Naked Freedom, a video film work by Marina Gržinid and Aina Šmid, artists resident in Ljubljana, Slovenia, connects seven young activists of the Youth Centre Medvode, the on-screen drawings of an artist in Belgrade and a workshop exchange with a theorist from Ghana at Duke University, Durham USA, in a conceptually networked space that allows reflection on local community and the possibilities of a radical life under the regime of global capitalism.

Isa Rosenberger, an Austrian artist, in her film work, Espiral: A Dance of Death in 8 Scenes, interlocks the negative circulation of capital in Eastern Europe today with the political ballet of the choreographer Kurt Jooss during the Weimar Republic in the 1930s.

Zbyněk Baladrăn, a Czech, Prague-based artist, offers us an ironic meditation on the complicity of our desires in the apparent ‘self-automation’ of capitalism, while also deconstructing the film-making process itself as a ‘manual of instructions’ for thinking, in his video essay, 40,000,000.

Yiannos Economou, a Cypriot video artist, in his work Pyrkos, takes us to a remote corner of Cyprus on the edge of the notorious ‘Green Line’ dividing Greeks from Turks, where village communities of charcoal-burners face the extinction of their traditional way of life.

Sašo Sedlaček, a Ljubljana-based artist, presents prototypes of portable and stationary toilets suitable to the Western world in his installation project AcDcWc, based on Indian technology called ‘Deenbandhu’, devised for the poorest households, but which can also enable us to generate electricity from the recycling of human excrement.

Ranko Bon, from Motovun, Croatia, offers us his deceptively simple interactive artwork, Residua (1976-2010). Viewers are invited to journey through the artist’s stream-of-consciousness archive begun in 1976 and now containing some 2 million words that can be searched.

Rasheed Araeen, Britain’s pioneer Minimalist artist, is developing a conceptual land art project, Mediterranea, which aims to intervene directly in reality. This visionary ‘unending artwork’ seeks to implement a really existing Mediterranean Union in a series of stages: first, by a rail network encircling its entire North African and European coastlines; second, by reopening the Silk Route to the East and thereby reuniting Africa, Asia and Europe in a new resurgent civilization.

Raising Dust is essentially an exhibition that reflects contemporary cross-cultural and aesthetic developments whilst interrogating the ways in which we map our geopolitical landscapes, but also our artistic and cultural territories.

CALVERT 22 is the UK’s only not for profit foundation dedicated to the presentation of contemporary Art and Culture from Russian and Eastern Europe. With five exhibitions a year from both emergent and more established contemporary artists as well as a range of contextual events, performances and activities, Calvert 22 aims to interrogate existing preconceptions about the art and culture of these regions and propose new possibilities for cross-cultural understanding and exchange.

With thanks to the Austrian Cultural Forum London for their support to the artist, Isa Rosenberger