The title of this exhibition echoes that of the magazine that Pietro Finelli directed and published in Milan between 1994 and 1995. Today, as an extension of that experience, artists were invited to exhibit a work, possibly on paper, that has a connection with a text. 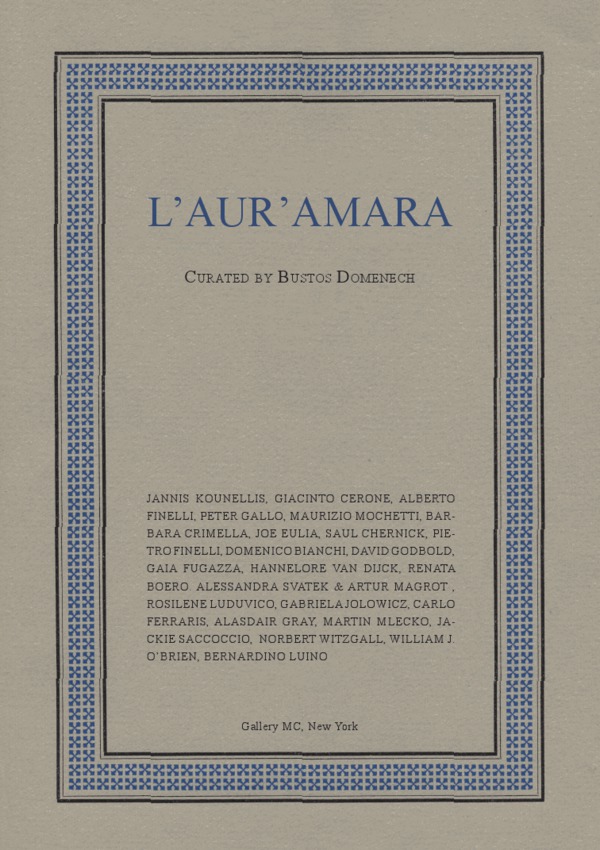 The title of this exhibition echoes that of the magazine L’AUR’AMARA, that Pietro Finelli directed and published in Milan between 1994 and 1995. The four of these that transpired predominantly consisted of literary arguments. The last of these published five drawings of artists along with their choice of a literary or philosophical excerpt that related to that work ( the artists were Maurizio Cattelan, Nada Cingolani, Pietro Finelli, Fabrizio Passarella, Franco Silvestro, and this magazine will be on display). Today, as an extension of that experience, artists were invited to exhibit a work, possibly on paper, that has a connection with a text. This text is not necessarily included as an addition to the work, but may be interjected into the its interior. L’AUR’AMARA is drawn from the first line of a celebrated song by the Occitan poet Arnaut Daniel, which reads:

The bitter aura / makes those bough-laden woods / barren, / which the sweet one thickens with leaves, / and the gleeful / beaks / of the wandering birds / it keeps stammering and dumb, / couples / and single ones, / therefore I endeavour / to act and speak / pleasantly / to many for the sake of her / who has cast me low from high, / for whom I dread to die / if my grievance isn't eased.

The Arnaldian text represents one of the highest developments of his poetry on a lingustic-ontological level. This is especially noted in the verses that allude to a bitter aura that bares while the sweet aura covers; a taking off and putting on of being that in the metaphorical language of the poet indirectly intends the existential condition of the artist that he or she subdues, in order to bring or receive a message of love. The relationship between art and literature is ancient as the disciplines themselves. The passages between one and the other has consisted of and has created a fundamental intellectual connection in the biographies of artists and writers. We vitally believe in advancing a choice, through the work of some of the artists participating in the project, of this symbiosis and intervention that seals traces and paths in the individual biographies of the artists, which reveal untold aspects and choices made by each of them.

The exhibition is designed to present primarily works on paper, a medium that is surprisingly ductile. Paper lends itself to infinite manipulations, transcriptions, depositions, and representations. Recently, paper’s function seems to be put in discussion with digital media as it is possible to transfer this “function” of paper to various and proper means that transmit immaterial images (though cinema has already given the first sense of the immaterial image). In any case, this interaction between paper and the “thing” – that is composed of graphic marks, writings, photographs, or also those that have to do with paper that undergoes a process of anamorphosis or of that which reproduces an idea in itself, always reveals a lightness and a malleability, united with a texture that touches the mind and body. This show does not intend to absolutely provide a set of samples of what paper represents in the artistic field, but it seeks to indicate a sensibility which different contemporary artists have in common: the capability to recall those qualities which are less apparent and less spectacular, which, in fact, are the distinguishing factors in so much present-day art. The aura (intense as an aura, as air, as a season, as a predisposition of the self) which the poet alludes to, allows one free to choose, to give or not to give, and overall, across the gift of art, of contributing to the intercommunication between beings that remains as one of the fundamental assumptions of our existential condition.

The exhibition will have the following showing itinerary: In December 2010 at the MC Gallery in New York, in April 2011 at the Générale en Manufacture Paris, in June and July at the CRAB - Centro Ricerche Accademia di Brera ex Chiesa di S.Carpoforo in Milan.