In summer 2010, artist opened a temporary 'shop' in an abandoned unit in the Zuidplein mall in Rotterdam South, a working class district of Holland that is home to several large immigrant communities. His new film installation Commission (2011), documents this experience. Contemporary for the exhibition "horizon" Emma Hunt took repeated pictures at regular intervals from the window of a plane during a long haul flight. 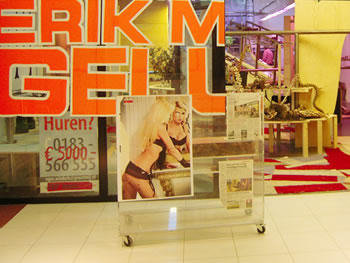 The Hayward Project Space presents How Can I Help You?, the first solo show in a UK institution by the major Dutch artist Erik van Lieshout (b.1968).

In summer 2010, the Dutch artist Erik van Lieshout (b.1968) opened a temporary 'shop' in an abandoned unit in the Zuidplein mall in Rotterdam South, a working class district of Holland that is home to several large immigrant communities. Rather than simply selling goods, van Lieshout, who lived in Rotterdam South between 1993 and 2007, used his shop as a base from which to (re)connect with the neighbourhood and its people, engaging them in characteristically frank and often very funny conversations about roots, regeneration, consumerism, and the rise of the Dutch Right Wing. His new film installation Commission (2011), debuting at the Hayward Gallery Project Space, documents this experience.

Van Lieshout has said that Commission is 'my commentary on the socio-political powerlessness of people and of art. It is also my quest for a home.' Examining the impact of figures such as the Rotterdam-based 'starchitect' Rem Koolhaas and the anti-immigration Dutch politician Pim Fortuyn, the film is both a portrait of a place, and of an artist's half-skeptical, half-hopeful attempt to become an agent of social good.

Commission was developed out of a project supported by Sculpture International Rotterdam (SIR) in 2010.

The Hayward Gallery Project Space
The Hayward Gallery Project Space, which opened in summer 2007, showcases artists from the UK and the wider world, many of whom have not shown in a UK institution before. Exhibitions have included solo presentations of the work of Salla Tykkä, Jess Flood-Paddock, Matthew Darbyshire and Cyprien Gaillard, and the group shows Deceitful Moon and Silberkuppe: Rooms Without Walls.

Emma Hunt’s ongoing investigations explore themes of repetition arising from photography. For this exhibition the artist took repeated pictures at regular intervals from the window of a plane during a long haul flight. Lining up the horizon with two corners of the image to create an abstracted vista, Hunt will use the large number of similar images to create an abstracted installation for this exhibition.

Transposed and refracted to respond to the angular architecture of the Hayward Gallery’s café, the images offer a wistful mediation on the passing of time and the corresponding burning of energy. The view from the window is at once sublime and banal, and its deliberately metered display correspondingly walks the line between an immersive experience and a carefully ordered exercise in cataloguing.