From Morandi to Guttuso 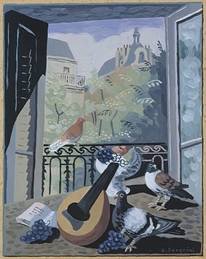 The collection of the Genoese engineer Alberto Della Ragione represents an extraordinarily comprehensive overview of Italian Modernism, spanning key movements and tendencies from Futurism to the Scuola Metafisica, Novecento and Corrente. Visitors to From Morandi to Guttuso: Masterpieces from the Alberto Della Ragione Collection, on view at the Estorick Collection of Modern Italian Art, 39a Canonbury Square, London N1, from 12 January to 3 April 2011, will be able to see some 40 major works by some of Italy’s most celebrated artists of the 20th century, including Carlo Carrà, Giorgio de Chirico, Filippo De Pisis, Marino Marini, Giorgio Morandi, Gino Severini, Mario Sironi and Emilio Vedova.

Della Ragione began acquiring works of Modernist art towards the end of the 1920s and donated his collection to the city of Florence in 1969 as a gesture of solidarity and affection following the devastating flood three years earlier. Last exhibited in 2006, the works have been in temporary storage at the city’s Forte di Belvedere, making this exhibition a rare opportunity to explore Della Ragione’s outstanding collection while a new home is being arranged.

Alberto Della Ragione (1892-1973) was born in Piano di Sorrento but moved to Genoa at an early age. He became a skilled naval engineer and developed an interest in music, poetry and the visual arts, initially collecting 19th-century painting. He then began to engage with Modernist tendencies, establishing relationships with the Futurist painters Fillia, Enrico Prampolini and Fortunato Depero. By 1934 his collection included fifteen works by Sironi, twelve by Arturo Tosi, eight by Giorgio de Chirico, ten by Filippo de Pisis and six sculptures by Arturo Martini. Later additions to the collection were works by Massimo Campigli and Giorgio Morandi, amongst others, from Vittorio Barbaroux’s Galleria Milano. Among these were a Self Portrait by Modigliani (no longer in the collection), on which Della Ragione spent the money set aside for purchasing an apartment, and rare examples of Metaphysical art.

Toward the end of the 1930s Della Ragione began to turn his attention to the work of the younger artistic generation which, due to the difficult socio-political conditions prevailing within Italy under the Fascist dictatorship of Benito Mussolini, was greatly in need of support. Drawing up contracts with artists such as Renato Guttuso, Renato Birolli and Giuseppe Santomaso, Della Ragione guaranteed them a monthly stipend in exchange for first refusal to purchase their works. This approach distinguished his activity from that of other contemporary collectors, who instead focused on more established names. In 1942 Della Ragione opened the Galleria della Spiga e Corrente, which was forced to close in 1944 due to the deteriorating conditions of war-torn Italy. Thereafter, Della Ragione bought works only sporadically for the remainder of his life.

Like that of Eric Estorick, Della Ragione’s collection reflects strong personal tastes and is marked by a predilection for figurative art. It brings together a number of works representative of the ‘return to order’, that Europe-wide phenomenon of the inter-war years that saw artists eschew the iconoclasm and fragmented imagery typical of the pre-war avant-gardes in favour of more enduring, traditional subject matter and formal vocabularies. Italian artists responded to this impulse in a variety of ways. The Novecento movement, dominated by Mario Sironi, promoted an art grounded in a sober visual language of solid, well-defined forms influenced by indigenous painterly traditions. On the other hand, he meditative still lifes of Giorgio Morandi, are reflective of the tendency’s stress on the magic and poetry of ordinary objects – an aspect of his art that forms a point of contact with the work of another painter represented in the collection, Giorgio de Chirico. In 1934 the inventor of Pittura metafisica, whose dreamlike landscapes were to exert a huge influence on the development of Surrealism, began a series of paintings entitled Mysterious Baths inspired by Jean Cocteau’s Mythologie, one of which is included in the current exhibition, revealing de Chirico’s consistent fascination with the iconography of Classical antiquity.

Severini’s Window with Pigeons may also be considered an example of this ‘return’ to figurative modes of expression between the wars. In the pre-war period Severini had belonged to the Futurist movement, which represented the opposite extreme of this tendency in its insistence on the centrality of modern subject matter and sensations. Della Ragione’s interest in the Futurist movement forms another parallel with the collection of Eric Estorick, although where the latter’s interest was focused on the movement’s early works, Della Ragione concentrated on its evolution during the 1930s. Artists central to Futurism during these years included Fillia, Depero and Enrico Prampolini, who is represented by several works reflecting his highly individual interpretation of ‘aeropainting’, a genre aiming to capture the ‘immense sensory drama of flight’. His Synthesis of Taormina presents an aerial view of the landscape with Mount Etna visible in the background, upon which are superimposed a number of elements evocative of the region and its products, such as a fragment of the Teatro Greco, as well as oranges and olives.

However, arguably Della Ragione’s greatest contribution as a collector was his support for the artists of the Corrente movement. Emerging in Milan in 1938, it promoted an expressionist-realist aesthetic that was to develop into the dominant tendency of the early post-war years, influencing not only painting but also literature and the cinema. The group stressed the importance of a social purpose for their art, rejecting abstraction as too rarefied and uncommitted an idiom, and calling for an art that took account of contemporary life. It also constituted an act of resistance against the stultifying cultural climate of the times and the rhetorical imagery favoured by the Fascist regime. Della Ragione acquired some of the most important works produced by the group that reflect the favoured expressionistic aesthetic such as Scantily-dressed Women by Renato Guttuso and Butchered Ox by Bruno Cassinari.

This outstanding selection of works from the collection will provide the viewer with an overview of the most significant tendencies in Italian art during the early 20th century and will perfectly complement the gallery’s own permanent collection. The exhibition will be accompanied by an illustrated catalogue containing essays by Laura Lucchesi, Curator at the Civici Musei e Chiese, Florence, and Roberta Cremoncini, Director of the Estorick Collection.