Things From the Gallery Warehouse 3

Double solo show that presents three large scale installation works from two young artists: 'Does God exist?' and 'Heaven is only an excuse' from Huang Kui and 'A game of unclear direction' from Zhang Ding. 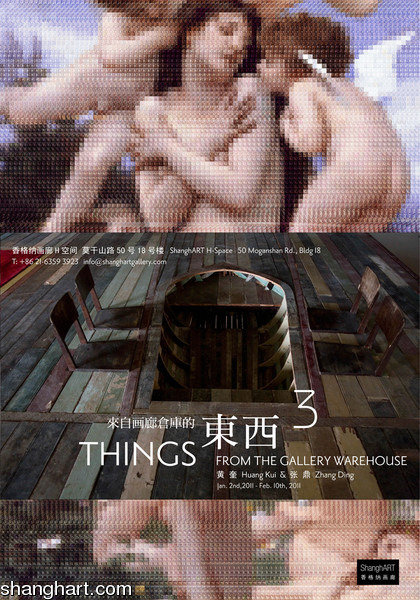 Following “Things From The Gallery Warehouse 1 And 2” which introduced this exhibtion series last winter ShanghART Gallery is pleased to present now “Things From The Gallery Warehouse 3.” This time three large scale installation works from two young artists, Zhang Ding and Huang Kui, will be exhibited. They are “Does God Exist?”, “Heaven Is Only An Excuse” from Huang Kui and “A Game Of Unclear Direction” from Zhang Ding.
What we do is to present people more approaches of understanding the art pieces and their creators.

In June 2007, under the scorching sun of Venice, Chinese artist Huang Kui repeatedly threw a two-faces dice (with YES and NO written on each face) like an ascetic monk in xx street. He noted down all the outcomes on a long strip of white cloth (about 900 metres). The performance was part of Migration Addicts, a collateral event of the 52nd Venice Biennale in 2007. Migration Addicts started in Shanghai, investigating how migration re-determined issues related to human identity, gender and spiritual needs. In 2007, Migration Addicts consisted in a series of interventions in public spaces of Venice. In the city scattered with cathedrals and churches, Huang Kui asked the question “Does God exist?”, repeatedly as in the myth of Sisyphus.
This exhibition includes the synchronized video from the performance in 2007 and a piece of white cloth with the dice outcomes written on it. Despite the title, which is similar, the work differs fundamentally from the performance in both its subject and the way it can be seen. The performance per se was aiming to “prove a statement” as well as to emphasize the relationship between environment and people during this process. Video that shows this performance, on the other hand, allows both spectators and artist to view the work out of the work itself. Performance by the artist is not so much to prove a statement but to experience the performance itself. And the YES and NO written on white cloth are not so much a record of outcomes but an experience on the pleasure of writing, or even on austerity. “Does God exist?” Did Huang Kui find the answer? In this migration intervention, he found out another spiritual concern among Chinese people within this “Migration” performance, in the name of proving the existence of God.

This work consists of a video and a light box installation. Inspired by an extremely violent online video, Huang Kui described its content as a process during which “some lives are deprived of by some other lives”. Huang separated this video frame by frame to obtain individual pictures in large quantity: pictures of murdering. Then he applied these pictures on an image of the oil painting named Le Printemps by French artist William-Adolphe Bouguereau, creating a new work, namely, the installation on display. During the production process, the colors of each picture were changed according to Le Printemps. Then, the artist took these color-changed pictures to make a new video, achieving this work that presents a uniquely sparkling effect.
By showing a video via images and reconstructing images via a video, Huang provides spectators with another possible way of observing. Therefore, one can both watch video frame by frame in one particular picture and re-experience the classical painting in the rhythm of pixels. Artist is attempting to rinse out every intolerably violent factual image in the online video by every beautiful and lovely pixel, which, as a result, leads to the form of an imaginary salvation. After baptism and deliverance, however, this video still appears brutal and horrible. Heaven is nothing but an excuse. And we can only pretend to be salved.