The group exhibition "Angry - Young and radical" is a multi media project that deals with radicalization of youth, its nature and its representation in the media. It consists of a show, a website, a film program and a debate. Over 100 vintage photographs of the Rotterdam harbour in the twenties made by the Hungerian filmmaker Andor von Barsy. Chema Madoz is a true master of visual poetry; sharp and with sense of humour, the Spanish photographer creates amazing combinations with objects from our daily lives. 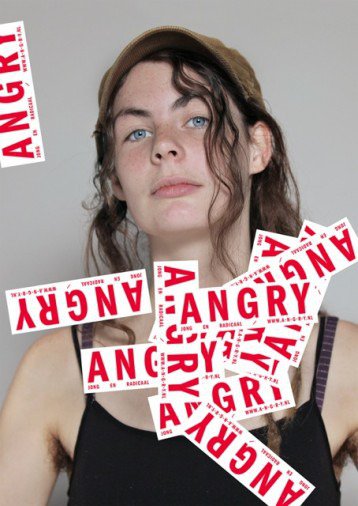 Radicalisation amongst left- and rightwing sympathisers, religious extremists, as well as hooligans and loners who resort to violence seemingly without reason, will be covered from multiple perspectives. Work by visual artists, photographers and filmmakers will represent their position towards the radical. This position will be juxtaposed with analytical presentations reflecting on the role of mass media in shaping the image of the radical. Also included will be media produced by radical youngsters themselves in order to spread their message (and radicalised imagery) through the mainstream media and on the internet.

People do not radicalise on their own, but as part of a group which functions within a closed, socially constructed 'reality’ and identity. Group members share feelings of injustice, relative deprivation, humiliation and discrimination. Some take the activist route to promote or prevent change. Gradually, anger and frustration build up and may lead to approval of violent acts and eventually planning and carrying these out.

The current political situation in the Netherlands demands more consideration of this phenomenon. ANGRY aims to meet this demand from an artistic point of view, combined with research into the role the media plays in creating our image of young people who strive for a certain ideal. But how do young people themselves feel about those media reports? To answer this question, material will be generated during workshops held prior to the exhibition. The goal of the educational programme is to turn the perception of the radical from an abstract into a more personal one. A web game with a questionnaire will be developed as a tool to trigger the discussion.

All elements of ANGRY will show that the radical is of all times and belongs to all social and cultural groups of our society. In short: from vegan to animal rights extremist, from pacifist to terrorist, ANGRY does not judge or criticise a position, but rather explores and questions it.

The first solo-exhibition about the German-Hungarian photographer Andor von Barsy’s (1899 – 1965) with photographs he took in Rotterdam.

The first solo-exhibition about the German-Hungarian photographer Andor von Barsy’s (1899 – 1965) with photographs he took in Rotterdam. Von Barsy is mostly known for his movies, but since 1930 he also worked on photo reports at the harbours of Rotterdam. These photos are now for the first time at show.

He aimed his camera on cranes and bridges to catch a dynamic image of the modern steal constructions. Von Barsy experimented with positions, lines and shapes to give his photos an abstract character.

The Spanish photographer Chema Madoz (1958) is a real master of visual poetry. Sharp and with sense of humour, Madoz creates amazing combinations with objects from our daily lives. He creates an unique world that can only exist in a photograph.

Madoz shows us how limited our own view mostly is and how photography can break that through. The basis of his work consist not only out of surrealism and humour but also out of his great love for the medium and a great technical expertise. His perfect prints – always black and white – are very beautiful and will surprise you piece by piece.

Madoz combines daily objects in different ways and takes photographs of this creations, without manipulating the photographs afterwards. This way he creates images that are placed outside their original context and create a new reality together. His photographs are not only taken to be seen, they are made to think about, reflect on and therefore, in all ways, to be contemplated. That is exactly why his pictures are so extraordinary; his visual paradoxes need our reasoning, our consideration; they are created to be completed and accomplished in our thoughts.

His work has been the object of many exhibitions and publications, all over the World. It is part of several international collections, for example the collection of the Museum of Fine Arts, Houston; Museo Nacional Centro de Arte Reina Sofia, Madrid; Museo Marugame, Hirai, Japan en Museo de Bellas Artes de Buenos Aires.

Exhibition
The Nederlands Fotomuseum organises this First solo exhibition of Chema Madoz in The Netherlands, in collaboration with La Fabrica (Madrid). The exhibition consists out of seventy photographs taken from 1983 until now and is composed by the Spanisch curator Oliva Maria Rubio.

On Saturday January 22, 2011 three new exhibitions will be opened in presence of Mayor Aboutaleb, the Spanish photographer Chema Madoz and rapper Manu van Kersbergen, among others.