Grijs / Grey the installation presents his new filmwork, entitled Highway Wreck (2013) inspired by a photo of an accident that took place more than 70 years ago. A central feature is the schism between the perception of time and the actual course of time. Contemporary Thomas Struth exhibits 5 works from his early period, photography is his medium but he is referring many times to painting traditions. 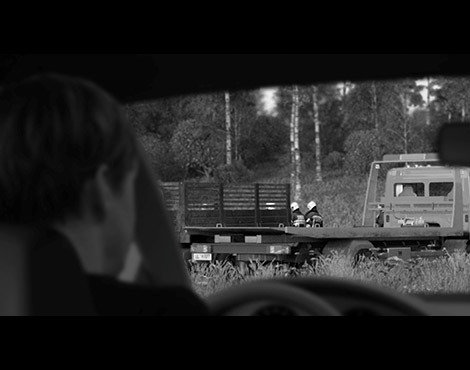 From 18 January to 23 February 2014, the installation GRIJS / GREY, created by the internationally renowned artist David Claerbout, will be on display in the Nederlands Fotomuseum. Within the framework of this installation, the Museum is proud to present the Dutch première of a new filmwork, entitled Highway Wreck (2013). David Claerbout is currently generating international furore with installations in which he applies cinematic techniques to photography.

In an extremely refined way, he generates a field of tension between screen time and real time. A central feature of this installation is the schism between the perception of time and the actual course of time. Claerbout’s work compels and induces intensive perception. In GRIJS / GREY, two other silent films besides Highway Wreck are shown: Rocking Chair (2003) and The Quiet Shore (2011). In addition, the Nederlands Fotomuseum has produced, in conjunction with David Claerbout, a ‘making-of’ version of Highway Wreck in which Claerbout talks about the genesis of this work.

David Claerbout (1969, Belgium) lives and works in Antwerp and Berlin. His work has been presented at Biennials and in various group and solo exhibitions worldwide. Often, a historical photo forms the starting point of a new work. By means of photographic reconstruction and digital image processing, he breathes new life into the fixed image or parts of this. The stilled image, which reaches back to an everyday occurrence in the recent or distant past, is animated with the extremely slow movement of, for example, the foliage of a tree, the light shift across a landscape, or the sweep of shadow across architecture. Occasionally it is the visitor himself/herself who sets the image in motion through his or her own activity. At that moment the generally static relation between the spectator and a film is breached.

Exhibition
The focal point of the exhibition is the work entitled Highway Wreck (2013) which will enjoy its Dutch première in the Nederlands Fotomuseum. This black-and-white film was inspired by a photo of an accident that took place more than 70 years ago. Claerbout combines the incompatible: the past and present jointly constitute equal visual components of a single picture of a motorway accident. At exactly this point of movement and progress, the human figures stand rooted to the spot, fixed in time. Their time is also our time (2014) but it is also the duration that we experience, as spectators, while we stand or sit, look and wait. In this work, a historical occurrence paradoxically coincides with current reality. At one and the same moment, we are looking at a remnant from the past and at something that has just happened.

The Quiet Shore (2011) shows a beach in Brittany at low tide. The smooth, wet, mirror-like surface of the beach evokes recollections of gelatine-silver print technique. Again people are standing around as spectators. The setting of children at play in the shallow water gives an Impressionist allure. Due to the succession of different perspectives, the suggestion is aroused that time is passing according to the reality of the spectator. However, nothing could be further from the truth.

The everyday setting of Rocking Chair (2003) appears to be easily accessible: a woman simply sitting in her rocking chair on the veranda of her house. However, as a result of the strong light-dark contrast, the face of the larger-than-life woman vanishes in the depths of the shadow. When the inquisitive spectator moves around the stand-alone screen, the woman bends her head slightly to the side, as if she senses the presence of the visitor and is cocking her ears to listen for telltale noises. Can the viewer suddenly influence cinematic time here?

About ZWART/WIT (BLACK/WHITE)
Claerbout’s installation harmonizes with the attention the Fotomuseum regularly pays to the relationships between static and moving pictures. Developments in digital techniques currently ensure that this relationship is being increasingly intensified and differentiated. GRIJS / GREY is the third installation to be presented within the ZWART/WIT programme. From 2012 to 2014, the Nederlands Fotomuseum will show three installations and two large-scale exhibitions on this theme. ZWART/WIT was developed by Anne van der Zwaag, and made possible by a generous contribution from the Wertheimer Fund.

Since the end of the 1970’s, Thomas Struth (1954) is creating his oeuvre on a clear and contemplative manner, documenting various theme’s taken from everyday life, such as urban views, museum visitors, landscapes, families and technical apparatus. Photography is his medium but he is referring many times to painting traditions. A balanced composition, a clear mis-en-scene and articulation of space are important characteristics of his work.

This presentation of five works from his early period as well as from recent times is organised in the context of the conversation that Frits Gierstberg, curator at the Nederlands Fotomuseum, will have with Thomas Struth on March 10th in the Goethe-Institut. This event is the first of a number of evenings entitled ‘Rotterdam dialogues’, an initiative by the Goethe-Institut Niederlande that provides Rotterdam cultural workers with the opportunity to invite a prominent guest from Germany for a public interview.