For his solo exhibition Manders creates a special environment in which he refers to his famous series Self-Portrait as a Building, that began in 1986; the title is based on one of his 'Fake Newspapers'. Goudzwaard presents recent paintings titled 'Between Red and a Transparent Plane'. 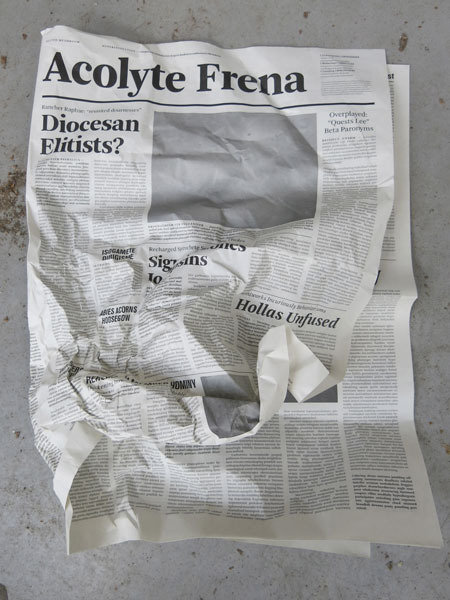 The Visual Arts Foundation Middelburg (SBKM / De Vleeshal) will present Acolyte Frena by Mark Manders at De Vleeshal (19.01-23.03.2014).
At the same time the exhibition Between Red and a Transparent Plane by Kees Goudzwaard will be on display at De Kabinetten van De Vleeshal (Zusterstraat 7, Middelburg).

For his third solo exhibition in the Netherlands Mark Manders creates a special environment in De Vleeshal, in which he refers to his famous series Self-Portrait as a Building, that began in 1986.

The title is based on one of his ‘Fake Newspapers’.

On the occasion of the exhibition a book will be published in collaboration with Roma Publications.

Kees Goudzwaard
Between Red and a Transparent Plane

The title refers to a new work that uses the nuances of a key color palette: based on red, white and black.

The work of Goudzwaard is an ongoing research to create a spatial dimension between different surfaces. With the technique of mimesis Goudzwaard realizes compositions that find a balance between abstraction and figuration. The paintings always a transparent structure seen in layers composed of seemingly material elements.

The compositions often have a landscape structure, as in Collected and Scherenschnitt from 2012. The work Parts of Fragments shows the phenomenon of a composition that seems to zoom in on a constellation of stars. The imaginary space of the artist goes beyond the composition itself, because he is looking for the world between the paint and the surface of the canvas.