Italian artist makes videos, sculpture, paintings, and drawings, in a variety of unconventional media, which expand on the possibilities for transformation and question our understanding of identity. For his Hammer Projects exhibition, Cuoghi presents a new series of self-portraits depicting the artist in a variety of personae, as if he had traveled down a different path in life, along with a black Carrara marble sculpture of the demon god Pazuzu. 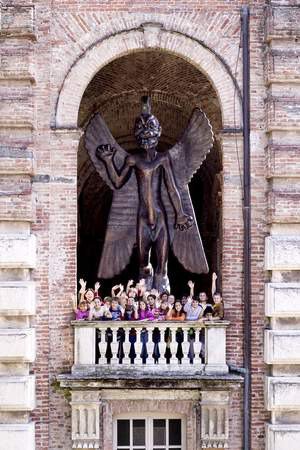 Italian artist Roberto Cuoghi makes videos, sculpture, paintings, and drawings, in a variety of unconventional media, which expand on the possibilities for transformation and question our understanding of identity. For his most legendary work, the artist, at the time a pierced punk, decided to followed his father’s daily routine of eating, dressing and working, and eventually came to resemble the middle-aged man. He created a monumental sculpture after a tiny bronze statue from the collection of the Louvre, of an Assyrian deity Pazuzu, king of the demons of the wind. He hand-crafted a number of ancient musical instruments, which he then used in a musical accompaniment to his own singing of a lamentation from 612 b.c. invoking the protection of the Assyrian gods. For his Hammer Projects exhibition, his first solo show in the U.S., Cuoghi presents a new series of self-portraits depicting the artist in a variety of personae, as if he had traveled down a different path in life, along with a black Carrara marble sculpture of the demon god Pazuzu.

Italian artist Roberto Cuoghi eludes simple explanation. He’s not a painter, but he paints. He’s not a musician, but he has made some highly inventive music (and musical instruments). He’s not a sculptor, but his sculptures captivate. He is an artist who explores the various manifestations of transformation, metamorphosis, hybridity, time, memory, death, and identity. In his own words, he faces “complex ideas iconographically.” Like a Dr. Frankenstein performing mad-science experiments in his basement, Cuoghi reimagines and reinvents himself, the people around him, and iconic characters from history and fiction.

Cuoghi doesn’t regard his most notorious project as an artwork, but it’s difficult to consider his practice without acknowledging its significance. In 1997 he began altering his appearance from that of a twenty-something punk artist (piercings and all) into that of a man in his sixties, much like his father (it began with him donning his father’s clothes and then gaining weight to fill out the suits). The dramatic exercise, which would continue until 2005, was a huge success: he soon resembled his father and began to suffer many of the physical ailments common to middle age. Prior to this he had undergone less drastic but still extreme acts of physical transformation. For one, he fashioned a pair of eyeglasses with prisms, which made the world appear upside down. He made a series of disturbing self-portrait drawings while at home sick, wearing the glasses (Il Coccodeista, 1997). Before the eyeglass experiment, he grew out his fingernails for eleven months, achieving considerable length, which greatly diminished his capacity to handle things and write. But these early physical challenges were easily reversible, unlike his time travel into old age. The artist, however, sees this fast-forward as an advantage; he was able to skip past the neurotic years of finding oneself. More

An animation produced in 2000, The Goodgriefies, contains a nod to Cuoghi’s ”young/old man”—a cartoon character that resembles him as his father. Other than that, the experience was not documented and not played out as a performance. The video hilariously and disturbingly illustrates Cuoghi’s obsession with hybrids and transformation as well as the collapsing of time. In it we see familiar characters from cartoons that were popular at different times over the last several decades—including The Simpsons, Peanuts, Scooby-Doo, Looney Tunes, The Flintstones, and Beavis and Butthead—morphing into one another, misbehaving, and sharing bodies. Shaggy’s head is upside down, Butthead sucks Linus’s thumb, and Maggie Simpson wears Woodstock’s body.

In pursuing his investigation of the possibilities, limits, and challenges of transformation, Cuoghi has spent a lot of time looking in the mirror and has completed a variety of self-portraits. There were the monstrous and distorted depictions drawn while wearing the prism glasses and the animated portrait of himself as his father in The Goodgriefies, and one could theorize that his aged Linus character in the video is a self-portrait of sorts as well, the thumb-sucking boy transported into the future. And in 2005, at the end of his own act of time travel, just before he began reverting to his original self, Cuoghi created a 3-D self-portrait in profile, built out of toys to make a mechanical face that resembles the inside of a clock. In an attempt to depict his improved portrait, along with his inferior self (a kind of before and after), he made two self-portraits, intended to be hung thirteen feet apart so that they couldn’t be seen at once. One features the artist’s baby face, as if he’d never undergone the intense physical change; the other reveals the lines that come from age (or rapid aging), stress, and exhaustion. The lines of time are collapsed, illustrating the years that he skipped over during his exercise in extreme transformation.

The latest series of self-portraits, on view at the Hammer Museum, depict a plethora of personae that the artist could have become had he chosen a different path in life. The series was inspired in part by the discovery of an unknown cousin. As a teenager Cuoghi found a memorial photograph of this cousin, something handed out at his funeral, which showed him smiling happily on his balcony. Cuoghi later discovered that the cousin had thrown himself off the balcony to his death, with his mother grasping at his arm, trying to save him. The stark contrast of the contented image in the photo and the tragic story of his suicide reminded Cuoghi of the potential in all of us to be something other than who we appear to be, while others, especially family, often see a different aspect. Here he offers a number of alternative identities for himself: a gang member type; a toothless, mute monster; a man who still lives with his mother; a modern saint; a pretentious intellectual. Each portrait suggests what he might have been had he not traveled the path of Extreme Makeover, Senior Edition.

One drawing, set into a deep gray box frame, features a young existentialist type, a phony sophisticate with a speech bubble that says, “zeige deine Wunde.” The phrase has a double meaning. It is the title of a Joseph Beuys installation from 1974–75 and literally translates as “show your wound.” If you look carefully, however, you can see an R after Wunde, and the phrase becomes “zeige deine Wunder,” which the artist interprets as “show me, oh Lord, your revelation.” Another drawing, softly rendered in graphite, depicts the boy who never left his mama—sweet, obedient, and innocent. In another we see a bald, goateed man with a stern expression on his face, and yet another portrays a face with only five small teeth and no mouth, with rows of teeth collaged to the bottom of the paper. There is one triptych with three variations of a goateed figure, again recalling gang portraits, and a diptych painted on round plates, much like ancient Roman coins. Seen together, these portraits form a family album of Dr. Frankenstein’s unborn creations.

A few years ago Cuoghi began researching Assyrian culture of the sixth and seventh centuries BC. He immersed himself in whatever material he could get his hands on, learning about its history, religion, customs, and traditions. The artist was drawn to the “dark irrationality, within which the ghosts of death and of total disappearance are the disquieting protagonists,” and he focused specifically on the period between 612 and 609 BC, when the last capital, Ninevah, fell and the empire came to an end, along with Assyrian culture. (1) Fascinated by this lost and forgotten world, Cuoghi homed in on the importance of music, taking on the challenge of handcrafting musical instruments modeled after those used by the Assyrians, which he would use to perform a lamentation for the fall of Ninevah. Although he had no prior musical training or experience, he created all the sounds for the piece Šuillakku (2008), a cacophonous symphony of ancient instruments, alien noises, and chants, broadcast on forty speakers.

In his research, Cuoghi kept coming across references to the Assyrian demon-god Pazuzu, described as “the lord of evil spirits of the frosty wind. . . . Pazuzu is certainly a demon, but he is also a God. When depicted and named he becomes a magical tool, and this was his work for 500 years. Pazuzu has almost always been a . . . small portable talisman for protection against illness.” (2) Cuoghi found a six-inch-high bronze figure of Pazuzu in the Musee du Louvre in Paris and made a 3-D laser scan of the figure, which he used to fabricate a twenty-foot-high replica for an exhibition at the Castello di Rivoli in Turin, Italy, in 2008. “My Pazuzu is an arithmetic enlargement of a talisman. . . . It seems like a monument, but it is a small pendant, conserved in a museum. It was built in the Giugiaro Design workshops, but its author is a Semitic craftsman from the first millennium BC. I am not superstitious, but Pazuzu is a pagan idol and his spirit dwells in every one of his representations.” (3) The figure was fabricated to fit on the museum’s outdoor veranda so that Pazuzu could watch over the city and protect the museum (it later traveled to the rooftop of London’s Institute of Contemporary Arts). Pazuzu exemplifies Cuoghi’s fascination with hybrid forms (in fact, the artist refers to him as a “goodgriefer”), with his “raptor claws, leonine calves, human thighs, scorpion’s tail, phallus, snake’s head, torso of a dog, human shoulders and arms, and double bird wings, and [a] head [that combines] human and canine features.” (4) Always depicted with his right hand raised, Pazuzu is best known today as one of the demons that possessed Regan in the movie The Exorcist.

Since he produced the massive version, Cuoghi has considered making one on a smaller scale. He finally decided to produce a five-foot-high double Pazuzu, carved out of black Carrara marble. Standing firmly on a simple marble base, with a ring atop each head (so that the amulet can be hung over a child’s crib), the two bodies, placed back to back, intertwine like an X, becoming one. The double demon perches in the center of the Hammer’s Vault Gallery, watching over and protecting the ghosts of Cuoghi’s alternative identities.