Greasy. From the outset of her career, Gallagher has brought together non-representational formal concerns (seriality, process) and charged figuration in paintings, drawings, collages, and films that reveal themselves slowly, first as intricate abstractions, then later as unnerving stories. Her new work, which she has described as 'charts or maps of a world not yet visible,' requires an exploratory approach, as if navigating unfamiliar territory or ruins. 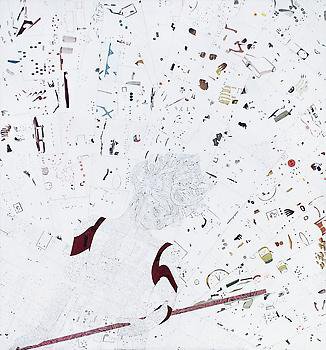 The work comes out of my desire to create an expansive, fluid realm that is both the concrete historical fragments it is made up of and the new form it describes.
--Ellen Gallagher

Gagosian Gallery is pleased to present recent work by Ellen Gallagher. “Greasy” is her first exhibition in New York since “DeLuxe” at the Whitney Museum in 2005.

From the outset of her career, Gallagher has brought together non-representational formal concerns (seriality, process) and charged figuration in paintings, drawings, collages, and films that reveal themselves slowly, first as intricate abstractions, then later as unnerving stories. The tension sustained between minimalist abstraction and image-based narratives deriving from her use of found materials gives rise to a dynamic that posits the historical constructions of the “New Negro” -- a central development of the Harlem Renaissance -- with concurrent developments in modernist abstraction. In doing so, she points to the artificiality of the perceived schism between figuration and abstraction in art.

Selecting from a wealth of popular ephemera -- lined penmanship paper, magazine pages, journals, and advertising -- as support for her paintings and drawings, Gallagher subjects the original elements and motifs to intense and laborious processes of transformation including accumulation, erasure, interruption and interference. Like forensic evidence, only traces of their original state remain, veiled by inky saturation, smudges, staining, perforations, punctures, spills, abrasions, printed lettering and marking, all potent evocations and emanations of time and its materiality. This attained state of "un-knowing" fascinates Gallagher and is one of the primary themes in her work.

Her new work, which she has described as “charts or maps of a world not yet visible,” requires an exploratory approach, as if navigating unfamiliar territory or ruins. It is a liminal realm that oscillates between legibility and blankness and which appears at different velocities, both sudden and perpetual. Corporeal features well out of overlapping, intertwining abstract fields; protagonists recur in various guises; incompatible narratives meet in fragmentation, cutting, and collage; fact and fiction merge in graphic eddies: Meaning is everywhere, generated by the elasticity between myriad associations.

In An Experiment Of Unusual Opportunity (2008) a macabre scene emerges from an ink-stained ground whose surface folds, twists and bends as though its underlying grid structure is convulsed by an internal energy, while recognizable physiognomic features surface momentarily among its folds. In OK Corral (2008) and Puppy Chow (2009) the urgency of printed media becomes the temporal pulp of a complex cultural past. Taking magazine pages from popular black periodicals, Gallagher soaks them in washes of indigo, slices them into thin strips, pastes the resulting stuff together, cuts it once more, then finally reassembles it to create a “jam” of frequencies and patterns in the swirling surface. Occasionally, legible words escape, disrupting the subtle modulations of the silent blue monochrome. In Greasy (2010), the magazine pages undergo various degrees of obliteration as she applies white ink to the surface to mask everything except the letters e and o; bottles, jars and tubes are whited out, leaving only a few graphic details. In a different mode of dissembling, the Morphia drawings are a series of transformed artifacts or “forgeries.” Drawn in graphite on transparent layers of paper, the transfer of mark-making on one side of the paper materializes onto the other side, making visible the inverse order of representation. Placed between glass so that both sides can be seen, they deliver a palimpsest of constantly shifting patterns that sometimes cohere to suggest a figure appearing from within.

Gallagher's approach is marked by the technological. The experience of working for extended periods on the films that she makes in collaboration with Edgar Cleijne-- where the totality of the work exists only on the screen -- offers a model for the organization of her paintings. IGBT (2008) plays on the horizontal condition of the flatbed surface of painting as an operational device. Its bold abstract ground takes the form of a circuit-board as the template for a geometric fabulation. Circuit-board references, the structures of digital music and its internal patterns, are indexical of the movement of electricity that becomes sound. Two silhouettes are positioned at its center, both inside the structure and floating away from it, like a frontispiece of a nineteenth century novel. The transformation in scale between the small circuit-board and the large-format painting creates a temporal disturbance that directs the invisibility of the acoustic toward the spatial conditions of abstraction.

An illustrated catalogue, designed by Louis Luthi, accompanies the exhibition, with a text by Amna Malik, lecturer in Art History at the Slade School of Art.

Gallagher lives and works in Rotterdam, The Netherlands and New York City.

For further information please contact Andie Trainer at atrainer@gagosian.com or at 212.741.1111.

Opening reception for the artist: Saturday, January 22nd, from 6 to 8 pm