Artist's most recent work, Escalier du Chant, is a sound installation made especially for the sweeping staircase in the Pinakothek der Moderne. At its centre is the human voice - with both its sensual power of expression and its political dimension. Nicolai has invited 12 international composers to write songs about topical political events throughout the current year. Today a conference with the artist (12h). First performance 30 Jenuary 2011, 12-18h. 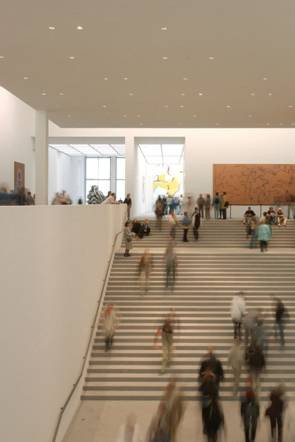 Since 1997, Olaf Nicolai has developed a wide variety of interdisciplinary projects through his examination of body, time and space. His most recent work, »Escalier du Chant«, is a sound installation made especially for the sweeping staircase in the Pinakothek der Moderne. At its centre is the human voice – with both its sensual power of expression and its political dimension.

Olaf Nicolai has invited twelve international composers to write songs about topical political events throughout the current year – events that at the present time are just as unforeseeable as the compositions themselves. Premieres of these songs will be performed a capella on the staircase in the Pinakothek der Moderne on twelve Sundays. There are no specific times for the performances as the songs will be repeated at varying intervals several times throughout the day. They will be sung by the Neue Vocalsolisten, Stuttgart.

The composer Rolf Riehm’s contribution (»Zwei Frauen« – Two Women) deals with two contrasting present-day figures: the Iranian Sakineh Mohammadi Ashtiani, who was accused of adultery in her country and condemned to be stoned to death, and the US pop-singer Lady Gaga. In the composer’s own words, his songs refer to »two ‘bodies’ in the public eye with which it is shown – in diametrically opposed ways – to what extent you have the power of control over your own body in this day and age and, as such, over your own existence. […] In Ms. Ashtiani’s case, it is that of a totalitarian state operating with methods that violate human rights; in Lady Gaga’s, it is self-promotion that far exceeds the boundaries of anything seen before. […] All possible forms of self-determination have been taken away from Ms. Ashtiani, whereas Lady Gaga, on the other hand, makes use of them all for her own good with masterful ingenuity.« (Rolf Riehm)

Elliott Sharp’s compositions are ballads that are dedicated to two people who died recently – the mathematician Benoît Mandelbrot and the musician Don Glen Van Vliet, better known under the pseudonym Captain Beefheart. One song thematises Bradley Manning, a member of the US American armed forces who was arrested in May 2010 on suspicion of passing data to the internet platform WikiLeaks.

Mika Vainio has taken the news of China’s new technology to reprocess spent uranian fuel rods in the Gobi Desert as the starting point in his contribution.

James Saunders will be present at the first performance of his work on 30.01.11.

Olaf Nicolai’s work will transform the staircase in the Pinakothek der Moderne into a stage on which visitors find that they are the actors. »My work has to do with the meaning of sound – as does the title of the work: when saying the French title ‘Escalier du chant’ out loud, there is an allusion to Marcel Duchamp. His work ‘Nude Descending a Staircase’ painted 100 years ago, radically extended the traditional concept of the static picture into the visual experience of motion. Duchamp’s painting renders time visible. My work also combines a staircase with a temporal experience.«