Solo show. The exhibition features thirty works spanning the artist's career from 1962 to 2010, including 10 of his wire sculptures and seminal 'written drawings' which employ the gesture of handwriting and suggestions of language as conveyers of emotion. Hightlights of the exhibition includes an untitled spherical sculpture from 2010 composed of metal hangers that references back to Ferrari's early sculpture. 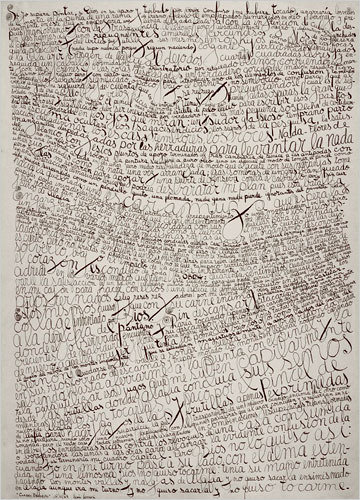 Haunch of Venison is pleased to announce León Ferrari's first solo gallery exhibition in New York since his acclaimed Museum of Modern Art (MoMA) exhibition Tangled Alphabets: León Ferrari and Mira Schendel in 2009. The celebrated museum exhibition was the ninety-year-old Argentinian's first major exhibition in the United States despite being lauded as one of the most significant Latin American artists of the twentieth century. Haunch of Venison's exhibition will feature thirty works spanning the artist's career from 1962 to 2010, including 10 of his wire sculptures and seminal "written drawings" which employ the gesture of handwriting and suggestions of language as conveyers of emotion. The exhibition will be on view from January 28th through March 5th 2011 and will coincide with the inaugural exhibition of the Augusto and León Ferrari Foundation at the Museo del Arte del Banco de la República in Bogota, Colombia.

Hightlights of the exhibition will include an untitled spherical sculpture from 2010 composed of metal hangers that references back to Ferrari's early sculpture. Berimbau, a sculpture never before shown in the United States and inspired by the Brazilian single string percussion instrument used in the Afro-Brazilian martial art capoeira. It is Ferrari's intention that viewers will step inside the 4 meter tall sculpture and engage in a tactile experience with it and another 3 meter tall musical piece titled Instrumento that will hang suspended from the gallery ceiling .Other highlights include Opus 113, most recently exhibited in the Tangled Alphabets exhibition at the MoMA. It was created in 1980 and the stainless steel formation marks Ferrari's triumphant return to sculpture. Another seminal piece is The Impregnating Tree. From 1964 it is one of the artist's first religious and political works and features an image of the genitalia of Michaelango's David collaged into a written drawing which re-imagines the biblical story of The Flood. In Ferrari's version all the world's men perish in the great flood and only women survive, left to copulate with a tree fashioned by Satan to impregnate them. The drawing is a harsh criticism of sexual morality of the time and women are the obvious heroes of the story, not only enduring but perpetuating human existence even in the absence of men.

The Impregnating Tree is a wonderful example of why, over the course of his sixty-year career, León Ferrari has developed a reputation for pushing the boundaries of established codes and conventions. Incorporating mediums as diverse as ceramic, wood and wire sculptures, drawings, collages, works on canvas, artist books, installation and performance, Ferrari forges a link between the ethical and the esthetical. He manipulates symbols, metaphors, and pop-culture objects to uncover and question seemingly irrefutable dogmas set by authorities and institutions.

An important retrospective of his work at the Centro Cultural Recoleta in Buenos Aires in 2004 stirred controversy due to the subversion of Christian imagery, characteristic of his poetic way of extracting and redefining a symbol's meaning. The local Catholic Church's attempt to censor the exhibition and the vandalization of several works drew international attention to Ferrari's unfaltering criticism of political and religious power structures and brought him universal recognition in the art community. This cumulated in his triumphant participation in the Venice Biennale in 2007.

Born in Buenos Aires, Argentina in 1920, Ferrari studied engineering at the Universidad de Buenos Aires and began producing ceramic sculptures in Italy in 1954. His work was recently honored with the Golden Lion at the 52nd Venice Biennale. The jury praised, "There is a body of work in the Arsenale that presents just some examples of a long and substantial career. The artist in question has continued a critical practice in the context of an often antagonistic political and social situation. He is given this award not only for his ethical attitude and political commitment, but also for a contemporary aesthetic relevance that is unexpected for a practice that spans six decades". León Ferrari's works are in prominent public and private collections around the world, including the permanent collections of Museum of Modern Art, New York; Reina Sofia, Madrid; Museo de Arte Moderno, Buenos Aires; Modern Art Museum, Mexico; Museum of Fine Arts, Houston; and the Cisneros Collection, Caracas.

Haunch of Venison
1230 Avenue of the Americas (Between 48th and 49th Street), New York
Hours: Tue - Sat 10-18 or by appointment
Admission free