This exhibition features sculptures, prints and drawings by Elizabeth Catlett, exploring her ground-breaking career from the 1960s to the present and her relationship to later generations of contemporary artists in the works by 21 of them. Their works will be on view in conversation with Catlett's share her attention to practice and technique as well as passion for exploring such issues as race, gender, history, memory, politics. 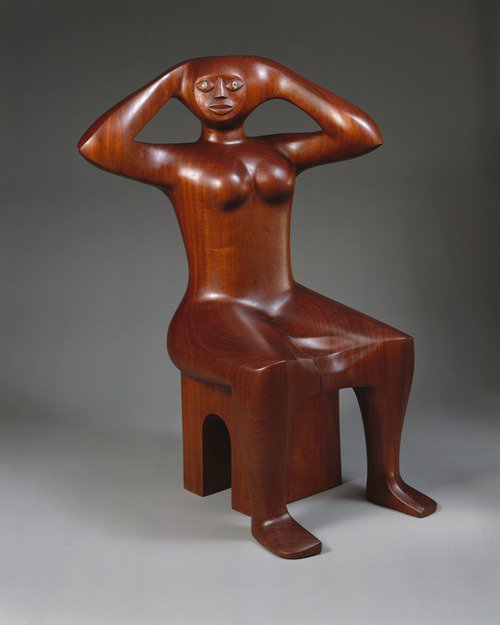 The Bronx Museum of the Arts will present Stargazers: Elizabeth Catlett in Conversation with 21 Contemporary Artists, an exhibition highlighting Elizabeth Catlett’s role as a pioneering African American female artist and her relationship to later generations of contemporary artists. On view from January 28 through May 29, 2011, the exhibition will explore her ground-breaking career from the 1960s to the present through a selection of more than 40 of her prints and sculptures. Stargazers will also include works by 21 international contemporary artists whose ideas and practices will be examined in conversation with Catlett’s life and work.
These artists are: Sanford Biggers, iona rozeal brown, Patty Chang, Patricia Coffie, Renee Cox, Sam Durant, Lalla Essaydi, Ellen Gallagher and Edgar Cleijne, Kalup Linzy, Kerry James Marshall, Wardell Milan, Wangechi Mutu, Wanda Raimundi-Ortiz, Robert Pruitt, Xaviera Simmons, Shinique Smith, Hank Willis Thomas, Mickalene Thomas, Roberto Visani, and Carrie Mae Weems. Organized by the Bronx Museum with guest curator Isolde Brielmaier, Stargazers will be the first exhibition to frame Catlett’s role within the context of contemporary art history and to look at her work from a global perspective.

The 21 artists, whose work will be on view in conversation with Catlett’s and many of whom are included in the Bronx Museum’s collection, share her attention to practice and technique as well as passion for exploring such issues as race, gender, history, memory, politics. The younger generation featured in the exhibition includes established and emerging contemporary artists from a range of countries, including Ghana, Italy, Jamaica, Kenya, and Morocco. The works encompass a wide variety of media, such as ceramics, new media, painting, photography, and sculpture, and date from the early 1990s to the present.

A painter, sculptor, printmaker, teacher, and activist, Elizabeth Catlett was born in 1915 and lives and works in the United States and Mexico. Her work focuses on African American culture and the ongoing struggles for equality and international human rights. She received first prize in the 1940 American Negro Exposition held in Chicago for her graduate thesis at Howard University and was the first African American recipient of an MFA in sculpture at the University of Iowa. Other notable achievements include serving as the first female professor of sculpture and the head of the sculpture department at the National School of Fine Arts, San Carlos, and receiving the International Sculpture Center’s 2003 Lifetime Achievement in Contemporary Sculpture Award.

Curator Isolde Brielmaier is a New York City-based independent curator, professor, and writer. Her recent exhibitions include Signs Taken for Wonders (2009, Jack Shainman Gallery, New York City); Shinique Smith: Torch Songs (2008, Saltworks Gallery, Atlanta); and Titus Kaphar: Painting Undone (2008, Red Gallery, Savannah College of Art and Design, Savannah, GA). She has served as Program Curator for the 2009 Armory Show and VOLTA NY; co-curator of photo MIAMI 2009; and a Curator of special exhibitions and programs at ARCOmadrid, the International Contemporary Art Fair of Madrid. Brielmaier is currently a Visiting Assistant Professor of Art and a Post-Doctoral Mellon Fellow at Vassar College, as well as Guest Professor at New York University. She received her Ph.D. in art history from Columbia University.

CATALOG The exhibition will be accompanied by a fully illustrated catalog titled Stargazers: Elizabeth Catlett in Conversation with 21 Contemporary Artists. It will feature essays by Brielmaier, curator Franklin Sirman, and artist Xaviera Simmons, among others.

This exhibition is made possible by The Andy Warhol Foundation for the Visual Arts and Agnes Gund.

The Bronx Museum will hold an open house to celebrate the opening of Stargazers on Sunday, February 6, 2011 at 2:00 p.m. Catlett and artists Sanford Biggers, Renee Cox, and Xaviera Simmons will also take part in a panel discussion, moderated by Brielmaier, about the exhibition and Catlett’s work as part of the Museum’s Bronx Talk Series on Friday, April 29, 2011 at 6:00 p.m.