The first programme of 2011 is devoted to music and in particular the relationship between visual arts and music. This multidisciplinary project, bringing together artists from Switzerland, France and other countries, extends throughout the Centre Culturel Suisse with two exhibitions and a series of special evenings. 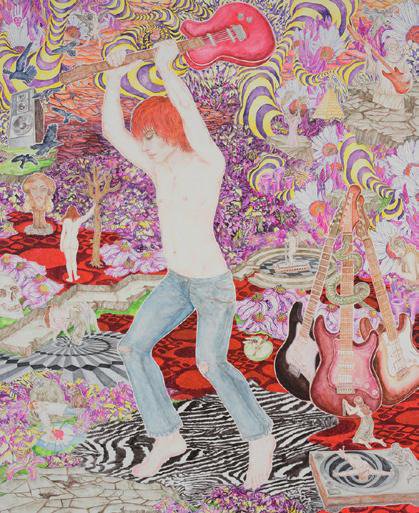 Visual artists have taken an interest in music in a variety of ways, and regularly on a reciprocal basis. From the correspondence between Arnold Schönberg and Wassily Kandinsky to Dan Graham’s film Rock My Religion (1984) and from Piet Mondrian’s interest in jazz and boogie-woogie to the elective affinities between Steve Reich, Philip Glass, Richard Serra, Sol Lewitt, Bruce Nauman or Michael Snow, and including the many album covers designed by artists or dominant figures active in both disciplines such as Laurie Anderson or Christian Marclay, the field of convergence between the two art forms is rich and fertile.

Parallel to the two exhibitions, the CCS has also wanted to involve exhibiting artists like Saâdane Afif or Hugues Reip in the conception of different special evenings, thus sparking off new and original artistic collaborations. This is also the opportunity to highlight a network of artists with a passion for music working in and around Lausanne, in particular Francis Baudevin, the art centre Circuit, the musician Christian Pahud and the photographer Catherine Ceresole.

The main exhibition brings together soundless works referring to the music of 37 contemporary artists. What is the music “treated” by visual artists, when sound is absent from the work? Multiple angles of approach are up for discussion. Some of the artists like Alighiero Boetti, Valentin Carron and Constantin Luser have chosen to represent or revisit the “musical instrument” as an object, others, including Saâdane Afif, Philippe Gronon, Dominique Blais and Isa Genzken, have considered the sound equipment used for amplified music - amp, speakers, radio etc. - like an image, sculpture or micro architecture.

Contemporary icons like Britney Spears, Michael Jackson, Ian Curtis or Morrissey are the source of inspiration for artists like Dawn Mellor or the duo Abetz & Drescher, while Anne-Julie Raccoursier and Hannes Schmid have concentrated on the imagery conveyed by music such as the body language and the look of musicians and their fans. Finally, identification marks, symbols, logos and specific typefaces can be seen in different formats from Matt Stokes, Jeremy Deller and Philippe Decrauzat.

Opening Friday 28th January (5-9 pm) throughout the evening: screening of Long After Tonight by Matt Stokes (2006, 6’40) in the auditorium
Exhibition visits with the curators: Wednesday 2nd February, Thursday 3rd March and Tuesday 5th April at 7 pm

Following on from his Audio exhibitions at the Cabinet des estampes in Geneva in 2006 and Autour de Jon Gibson at Circuit (Lausanne) in 2008, the artist Francis Baudevin is presenting Unisson in the CCS’s second exhibition space La pièce sur cour. Taking as its starting point the compilation Plow! (1985, label Organik) which brought together American bands like Sonic Youth, Live Skull, Swans and Swiss musicians like Abt. 409, Copulation or Christian Marclay, Francis Baudevin is revisiting the links between the music scenes in New York and Switzerland.

The exhibition focuses particularly on the work of Swiss artist Catherine Ceresole, who has been covering these scenes extensively since the 80s with photos, often contrasted and close to the noise range, and who has found a natural extension in fanzines like Thurston Moore’s Killer. Newspapers and flyers collected from events from venues like the Rote Fabrik in Zurich and a number of records will complete this exhibition.

Francis Baudevin is offering a guided visit of the exhibition, followed by the screening of the documentary Step Across the Border by Nicolas Humbert and Werner Penzel (1990, 90’), an impromptu stroll around several towns featuring Fred Frith and his musician friends. (09.02).

EVENTS (auditorium)
A number of special evenings are echoing these exhibitions.

EXTRA MUROS
Alongside his participation in the Echoes exhibition, Matt Stokes (GB) will present the Sacred Selections project, where electronic music from the 90s has been transcribed for organ and played in a Paris church by British organist Paul Ayres (GB) (8.04 / church of the Blancs-Manteaux). Image: Abetz & Drescher, Time for action, 2009 © courtesy Galerie Suzanne Tarasieve