A subjective approach to performance art in Switzerland from 1960 to 2015 via the 100 artworks of 46 artists, companies and groups. It is an hybrid form of an exhibition-cum-festival divided into several sections with a range of different formats, durations and locations. 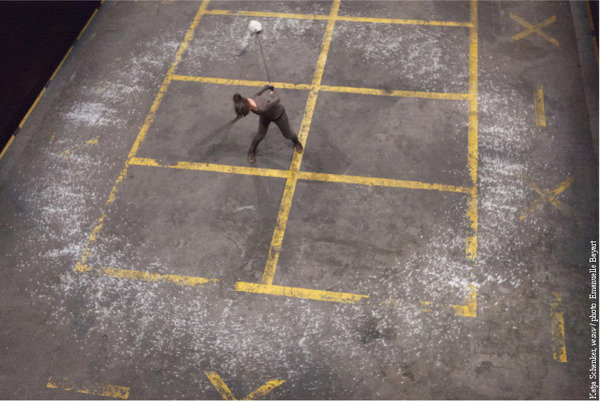 To mark its 30th anniversary, the Centre Culturel Suisse has designed an event entirely devoted to performance art, a medium with a range of definitions at the intersection of several different disciplines. PerformanceProcess offers a subjective approach to performance art in Switzerland from 1960 to 2015 via the works of 46 artists, companies and groups.

PerformanceProcess takes the hybrid form of an exhibition-cum-festival divided into several sections with a range of different formats, durations and locations. For three months, an exhibition comprised of documents and some 100 artworks made by 35 artists will be presented at the CCS. 12 "focuses"—five-day solo exhibitions—will be presented in succession in the centre of the main room, often accompanied by performances lasting from a few minutes to five days. The 2015 edition of the Extra Ball festival will take place during the inaugural weekend. In total, over 40 performance pieces (and a total of about 100 individual performances) make up the PerformanceProcess live programme at the CCS and 11 partner venues in Paris. A symposium in early December will highlight the theoretical and historical aspects of performance art and place the subject in an international perspective. This outstanding event also features scenography designed by architects at Bureau A that gives the CCS a completely new look. In addition, a dedicated website, www.pprocess.ch, with graphic design by Ludovic Balland, goes live on 18 September. Photos, videos, interviews and texts will be added over time, ultimately making it into a reference resource on performance art in Switzerland.

The performance medium has been attracting significantly more attention over the past few years, as evidenced, for example, by the Performa Biennial in New York in 2005, the Nouveau Festival at the Centre Pompidou in Paris in 2009, and the future section of the Tate Modern in London called The Tanks: Art in Action, which previewed in 2012. The Swiss Performance Art Award made its appearance in 2011.

PerformanceProcess is naturally part of this trend, but also arises specifically from the multidisciplinary nature of the CCS. Since Jean-Paul Felley & Olivier Kaeser have been its directors, they have consolidated and developed themes relating to both visual and performance art. Their project thus aims to present—on an equal footing and in a single space—works by artists identified as belonging to these two artistic fields. They also adopt a subjective approach to performance art, as the selected artists are not exclusively identified as performance artists but often include performance in their work alongside other media. Indeed, we use the term "performance art" for the sake of convenience: other terms such as happening, event, action or concert are also used, and films, videos, photographs, sculptures, drawings and documents will also be on show.

The period covered stretches from 1960 to 2015, beginning with Jean Tinguely and his self-destructing machines built in the MoMA garden in New York in 1960, then spanning five decades to include the work of artists who are 25 years old today. With performance art more than any other medium, we always have to expect the unexpected—so please come and be surprised!