Un peu d'espace(s). Covering the artist's different series, which borrow from both sculpture and painting, the exhibition highlights the richness of a body of work that spans a period of over fifty years. 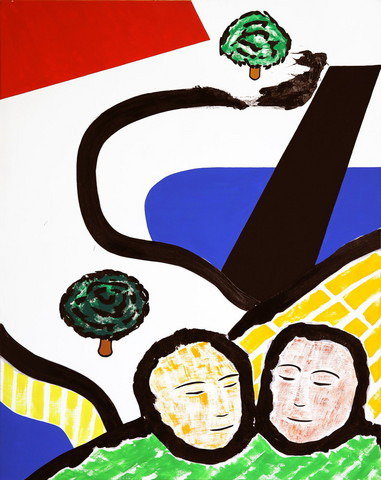 Art : Concept gallery is pleased to announce its first solo exhibition by the artist Jean-Michel Sanejouand. Very aptly entitled Un peu d’espace(s) [A Bit of Space(s)], this show inaugurates not just a new collaboration, but also a new space located at 4 passage Sainte-Avoye. Covering the artist’s different series, which borrow from both sculpture and painting, the exhibition highlights the richness of a body of work that spans a period of over fifty years.

Beyond providing a fitting title, the notion of space repeatedly found in the artist’s terminology establishes itself as the driving force behind all of his practice. It started coming into play with the emblematic Charges-Objets (1962- 1967), which the artist says “met a sudden need to experiment with concrete space, and an intense desire to provoke that space”*. Their provocative power does not end there. These truly disruptive elements prefigured future ideas, particularly about the status of a work of art, and more generally about our budding consumer society. They define a new plastic form that is neither painting nor sculpture, or is perhaps both. Their reconciliation is confirmed, as shown here by the moving combination of a leather lace with a white canvas (1962). The chosen materials are simple, extracted from our everyday life, interchangeable in time. There is no room for attempts to fetishize art objects. These forms are free, like their creator. This is next shown by his lively and audacious Calligraphies d’humeur, little humorous-erotic scenes drawn with Indian ink between 1968 and 1978.

The liberating power that emanates from Jean-Michel Sanejouand’s works seems to be physically limitless. Whatever cannot be created in the concrete space is propelled into painting and imagination with all the more power and appeal. This is the case with his Espaces-Peintures (1978-1986), landscapes with bright flat tints outlined in black, in which monumental Organisations d’espaces would have been created. Failing that,, but for our greater enjoyment, they emanate a hypnotising beauty, which escapes from the painting’s flat surface. In Peintures Noirs et Blanc (1986-1992), colour is temporarily abandoned in order to give way to a perfect mastery of space and emptiness. The very distinctive brushstrokes that characterise this period not only structure the space of the painting in question, they create an invisible third dimension that links it to other representatives of the same series. La suite en 15 is its most beautiful illustration.

The exhibition also gives prominence to his sculptural practice, presenting a set of sculptures made from stones gathered during the artist’s walks (1989-). Assembled and painted black, they evoke birds, dolmens or miniature moaï. Here again it is a question of space, that which is formed between and around them, and that which is created through dialogue with their 2D equivalents in the Sculptures-Peintures (1996-2001) and Espaces-Critiques (2002-2008).

The exhibition within our walls retraces fifty years of practice and shows the extent to which freedom of creation proves beneficial for the development of forms and ideas. One is newly struck by the works’ inventive and precursory nature. Each of his experiments seems to anticipate the next new wave, and it is not his latest stone sculptures that will contradict him.