A site-inspired exhibition held in Central Tvatt, a community laundry facility in Hokarangen, a typical Stockholm suburb built in the 1940s according to the utopian urban ideals of early social democracy. 'Washed Out' consists of works exhibited in a functional common laundry, a residency lasting the duration of the project, and public programs positioning artistic practices in relation to collective memory. 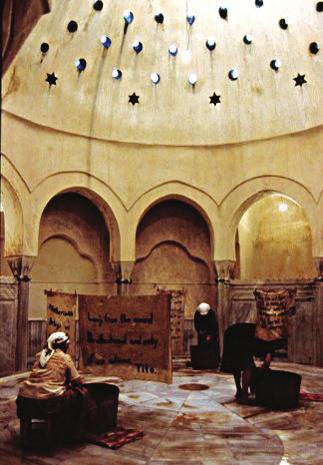 For the third year, apexart’s Franchise will present exhibitions somewhere else. Through an open call, two exhibi- tions were selected by a jury, and apexart will provide financing, advice, and an accompanying brochure to the two winners. The first exhibition, Washed Out, will be presented in Sweden this February, and the second winner, Reorientation, will be presented in Jordan in May.

Washed Out is a site-inspired exhibition held in Central Tvätt, a community laundry facility in Hökarängen, a typical Stockholm suburb built in the 1940s according to the utopian urban ideals of early social democracy. Decades later, this still functioning laundry facility shares its premises with a publicly funded art center, Konsthall C, and a small collection of vintage laundry ma- chines.

In light of Sweden’s current political situation, many social democratic values have become lost in individualistic modes of living and transformed into symbols of the past. Far beyond a critique of the Swedish model, the notions of community and washing can be extended to address the action of ‘washing out’ portions of history that have been hidden from collective memory for one reason or another.

Within the site of a laundry facility, representing the faded ideals of social democracy, this exhibition registers the act of wash- ing as a significant gesture for cleaning the collective memory, as well as the symbolic conflict between individual memory and experience. It is through recalling and critically engaging with specific historical moments that the process of “washing out” can prevent memory from fading into oblivion.

Seeking resonance with this unique site, an international group of curators invited artists who have used their personal experi- ences as a starting point on which to reflect on historical moments that have been “washed out,” or purposefully erased from collective memory. They have done this through performing domestic tasks in the landscape, rewriting history books, or rubbing out information from media images, among other actions.

Washed Out consists of works exhibited in a functional common laundry, a residency lasting the duration of the project, and public programs positioning artistic practices in relation to collective memory. Washed Out is supported, in part, by Konsthall C and CuratorLab 2010/2011 at Konstfack University College of Arts, Crafts and Design.

Apexart’s exhibitions and public programs are supported in part by the Andy Warhol Foundation for the Visual Arts, Carnegie Corporation of New York, Edith C. Blum Foundation, Mary Duke Biddle Foundation, The Greenwich Collection Ltd., The William Talbott Hillman Foundation, and with public funds from the New York City Department of Cultural Affairs and the New York State Council on the Arts.