The title of the project is a reference to the controversial exhibition at the Metropolitan Museum in 1969. The black and white and red photographic project consists of 48 images of splattered walls, shadowy figures, dirty streets and battered buildings. 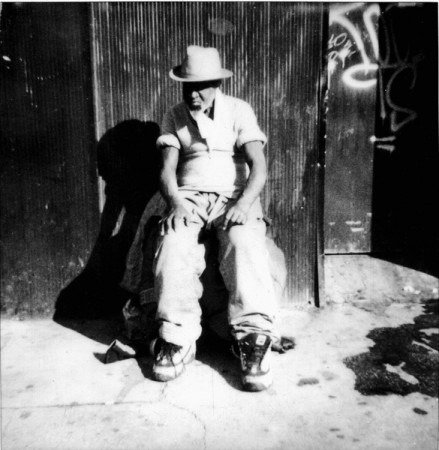 Long before Harlem became one of the trendiest neighborhoods in the real estate market of Manhattan, it was a metaphor for African American culture at its richest. Charif Benhelima’s passion for Jazz as well as his desire to experience African American culture at its source prompted him to move to Harlem, where he lived and worked from 1999 to 2003, undertaking the difficult task of photographing a place that was only known to him through legend and through its music. The title of the project is a reference to the controversial exhibition at the Metropolitan Museum in 1969.

The black and white and red photographic project consists of forty-eight images of splattered walls, shadowy figures, dirty streets and battered buildings. Benhelima uses a Polaroid camera because of the immediacy and archival quality of its images.

Charif Benhelima (b. 1967 in Brussels. Lives and works in Antwerp and Rio de Janeiro) comes from the practice of street photography and since 1999 has been experimenting with Polaroid . The artist’s documentary approach gradually gave way to a more unconventional photographic imagery, going from a frontal depiction of a reality to the exploration of reflections, shadows, reproductions of pre-existing photos, monochromatic images and the investigation of abstraction within a figurative context.

The Polaroid images are scanned, enlarged and printed in Ilfochrome with no digital manipulation. Benhelima makes use of the limitations of his support (Polaroid 600) to wash out much of what normally would be visible, creating images that seem to be fading or yet to be fully developed, as if they were at the limit of existence and non-existence. The impression of emptiness or the sense of invisibility challenges the viewer’s perception. Benhelima pictures the real in an illusory image in which a strange sense of depth and volume is created; questioning photography and disturbing the experience of space.

A bilingual catalogue (English/German) accompanying the exhibition with texts by Daniella Géo, James Harithas and Caryl Phillips is published by Snoeck Verlag.

Image: Charif Benhelima - Fredrick Douglass Bl., Harlem, from the series Harlem on my mind: I was, I am, 1999