Kinetic Histories can be seen as a discursive tour through some of the creative interventions and uncanny visions that have defined artists' use of video and digital media. Although these works reveal multiple forms and strategies, the artists' critical engagements with media culture is a key thread. Works by Joan Jonas, Kristin Lucas, Takeshi Murata, Bruce Nauman, Nam June Paik & Jud Yalkut, Raindance, Pipilotti Rist... 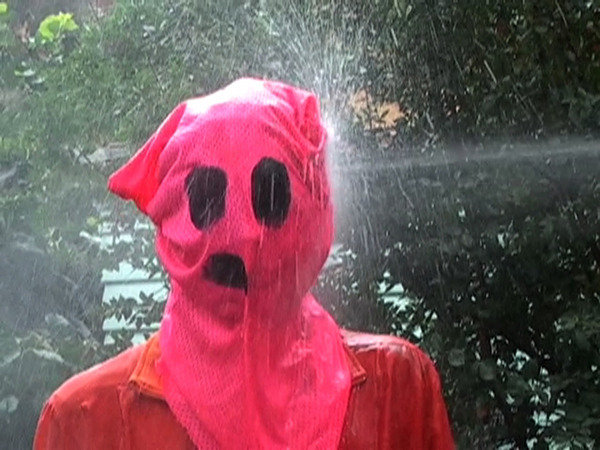 Encompassing five decades, the ten single-channel video works in this exhibition are drawn from the extensive archive of Electronic Arts Intermix (EAI), a non-profit media art resource in New York. EAI is celebrating its 40th anniversary in 2011, a landmark that provides a framework for reflections on the multiple histories, artistic practices and cultural contexts that have informed media art in the United States.

Rather than a survey, Kinetic Histories can be seen as a discursive tour through some of the creative interventions and uncanny visions that have defined artists’ use of video and digital media. Two works from each decade -from the 1960’s to the 2000’s- are set in dialogue with one another. From the analogue improvisations of the 1960’s to the digital remixes of the 2000’s, they capture the specific (and eclectic) cultural, technological and artistic landscapes from which they emerged.

Although these works reveal multiple forms and strategies, the artists’ critical engagements with media culture is a key thread. Radical manipulations of television in the 1960’s and 1970’s are echoed in recent inquiries into the ubiquity of digital technologies and Internet culture. Activating a dialogue between divergent works in and across time, this kinetic tour also speaks to the idea of the “salon” as a space animated by conversation and exchange.

Lori Zippay is the Executive Director of Electronic Arts Intermix (EAI), a nonprofit arts organization and video art resource in New York. She has been active in media art exhibition, distribution, education and preservation for over twenty-five years. She has curated numerous video programs and exhibitions at international venues, and has lectured, taught and written extensively on media art.

She has developed EAI's major collection of over 3,500 works by emerging and established artists, and initiated its pioneering preservation program and extensive digital resources. She is editor and co-author of the EAI Online Catalogue (1997-2011), a comprehensive digital publication on the EAI media art collection, and A Kinetic History: The EAI Archives Online, a digital resource on the emergent video art movement in the 1960’s and ‘70’s, among other publications and resources.

Electronic Arts Intermix (EAI) Celebrating its 40th anniversary in 2011, Electronic Arts Intermix (EAI) is a New York-based non-profit organization that is a leading resource for video art. Founded in 1971, EAI fosters the creation, exhibition, distribution, education and preservation of video and digital art. EAI’s core program is the distribution and preservation of a major collection of over 3,500 media artworks, spanning the mid- 1960’s to the present, from seminal works by video pioneers to new Centro de Arte y digital works by emerging artists. EAI's activities include a video Creación Industrial preservation program, viewing access, educational services, extensive online resources, and public programs such as artists' talks, exhibitions and panels. The Online Catalogue is a comprehensive resource on the artists and works in the EAI collection, and also features extensive digital content, and materials on exhibiting, collecting and preserving media art (http://www.eai.org).

LABoral Centro de Arte y Creación Industrial
Los Prados, 121, Gijon
OPENING HOURS: Monday, Thursday and Friday, from 10 am to 2 pm and from 4 to 7pm
Wednesday, from 10 am to 7 pm
Saturday and Sunday, from noon to 8 pm
ADMISSION: General public €5, Reduced €2