The exhibition brings together forty Jack B Yeats oils and concentrates on the arc of Yeats artistic practice from his early realistic works to the wildly romantic and apocalyptic visions of his later years. The show will feature work spanning a sixty-year period, from an early Sligo scene completed in 1895, to one of Yeats final works, completed in 1956 the year before he died. 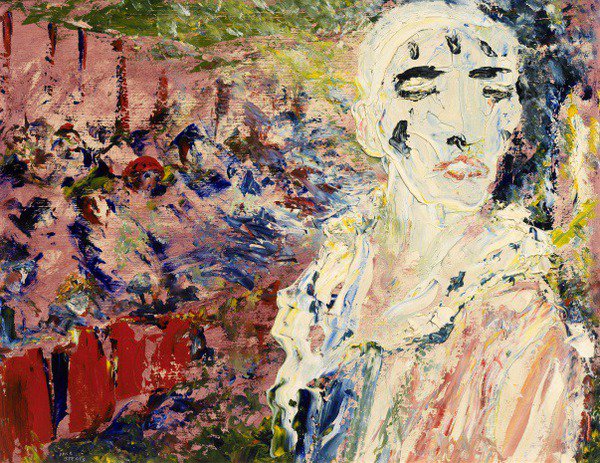 The Model is delighted to present Jack B Yeats; The Outsider, guest curated by Brian O'Doherty. This exhibition examines the work of one of Ireland's greatest artists through the eyes of another of the country's most accomplished and successful artists.

The exhibition, which is the first major survey of Yeats work to take place in Ireland in almost forty years, compares his work of the 1920s, when he was firmly rooted in reality, with the wildly apocalyptic visions and romanticism of his later period.

Yeats was in his thirties before he began to work regularly in oil paints and his early experiments in the medium remained realistic in style. His early subject matter was generally concerned with the documentation of a changing Ireland of that time, and reveals a fascination with the rituals of everyday life from political events to funerals, races and circuses. However throughout the 1920s a profound development came in Yeats' style. His handling of paint became much more free, his brushstrokes more loose and his outlines more and more blurred. It is interesting to note that his subject matter remained essentially the same throughout this change, but became imbued with a new, more mystical meaning.

The exhibition features two works, which have not been seen in public previously, and were once in the collection of the author Graham Greene. A Horseman Enters a Town at Night, 1948, is a particularly significant work. Executed in dark paint, with flashes of vermillion and cadmium yellow, this work is considered to be one of Yeats' masterpieces and The Model is delighted to premiere its showing in this exhibition.

Another work of particular note is Paper Bags for Hats, 1925, which was once in the possession of Ernie O'Malley, the early twentieth century writer and revolutionary. This playful work, which portrays Dublin street sellers protecting themselves from the rain by placing paper bags on their heads, reveals Yeats' abiding interest in those who lived their lives on the fringes of society. This work has not been seen in Ireland since an exhibition held in Sligo in 1963, curated by Nora Niland, founder of the Niland Collection.

Brian O'Doherty is an internationally celebrated artist, theorist and critic. Born in Ireland in 1928 and initially trained as a doctor, O'Doherty developed a friendship with Jack Yeats as he studied medicine and nurtured this friendship up until Yeats' death in 1957. Brian has recently completed a major new critical text on Yeats, published on the occasion of this exhibition, which aims to re-evaluate the artist's oeuvre.

Many of Yeats' finest paintings from private and public collections, including those of The National Gallery of Ireland, Crawford Art Gallery and Tate Britain are included in this show. The Model is delighted to be in a position to show these great works in Yeats' hometown of Sligo. The Model is also extremely grateful to all the lenders both public and private for their generosity in enabling this exhibition to be mounted.

Jack B Yeats; The Outsider is accompanied by a fully illustrated catalogue with newly commissioned texts by Brian O' Doherty, Tom McEvilley and Tricia Cusack.