The Portrait in the 20th Century. Based on the works of 22 artists, this themed exhibition of the collection traces the various intentions by which human depiction has lost its representational function from the mid-20th century onward. The show includes painting, photography, graphic design, sculpture and installations by Francis Bacon, John Baldessari, Georg Baselitz, Christian Boltanski, Gunter Brus, Alberto Giacometti, Annette Messager, Bruce Nauman, Dennis Oppenheim... 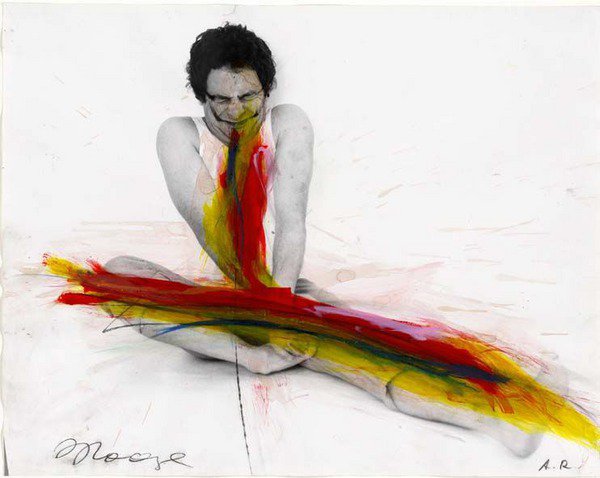 “Painted over”, “smudged” and “erased” surfaces have been standard in art since the mid-20th century, particularly when it comes to portraiture and the human image. The representational function of images dominated painting and sculpture in Europe from the 14th to 19th centuries, but this function became less important with the advent of photography and scientific advances in the early 20th century. The way human beings were depicted began to change. Once considered a divine effigy, as true to life as possible and captured for all time, it became the object of manifold investigations and questioning. While artists such as Gerhard Richter and Georg Baselitz painted over portraits or turned them upside down against the analytical background of “What is painting?” artists such as Wols, Cy Twombly or Francis Bacon portrayed and represented man in a psychogrammatic way, in other words with the gestural, expressive traces of a brush.

Artists such as Arnulf Rainer and Brus engaged in a different kind of "destruction" of the human image by using the body as an instrument and means of expression, declaring it the canvas and using it to sound out the limits of art. Artists – male and female – intervened in human portrayal to the point of fragmentation and the dissolution of the face and body, particularly as it connected to questions of gender. Over-painting, smudging and erasure were also employed by a number of artists including Wolf Vostell, Sigmar Polke and John Baldessari to serve political ends or as an irony-laden, critical means of questioning representation mechanisms in the media. Based on the works of 22 artists, this themed exhibition of the collection traces the various intentions by which human depiction has lost its representational function from the mid-20th century onward.

Accompanying the presentation is a publication. www.freunde-der-kunsthalle.de