Art and Dance since the 1960s. Choreography - meaning the proposition for a sequence of movements - is the common denominator between art and dance in the exhibition. The works brought together here choreograph the visitor: they guide his or her movements and invite to physical experiences that transform the viewer into an active participant. Some works are also activated by a group of dancers or performers for the exhibition's entire duration. With Janine Antoni, Pablo Bronstein, Trisha Brown, Boris Charmatz, Lygia Clark, William Forsythe, Simone Forti, Dan Graham, Bruce Nauman... 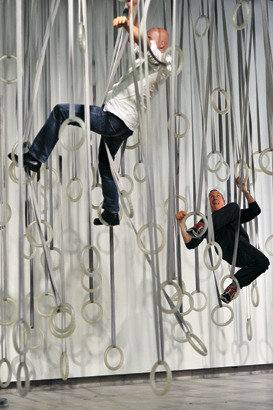 Choreography - meaning the proposition for a sequence of movements - is the common denominator between art and dance in the exhibition "Move". The works brought together here choreograph the visitor: They guide his or her movements and invite to physical experiences that transform the viewer into an active participant. Some works are also activated by a group of dancers or performers for the exhibition's entire duration. An obvious example of the combination of installation and visitor participation is William Forsythe's "The Fact of Matter" (2009), a choreographic object composed of 200 gymnastic rings that hang at various heights from the ceiling. The visitor can move across the room using these rings without touching the floor, thereby putting his strength and flexibility to the test.

Forsythe thus provides a structure for a variety of possible movements. Christian Jankowski pursues the same playful approach with his invitation to hula hoop in the exhibition ("Rooftop Routine", 2007); and Trisha Brown lines up water-filled pots in such a way that the visitor either consciously steps into the pots or avoids them ("The Stream", 1970).

The opposite pole of playful experiences with dexterity and capability is embodied in the green light corridor by Bruce Nauman, which intentionally and severely limits the visitor's freedom of movement. "Green Light Corridor" (1970) consists of press board walls that can only be passed through sideways. Confinement, intense green light and soundproofing lead to an intensified perception of one's own body, which may increase to even anxiety and can thus lead to a new self-awareness. "An awareness of yourself comes from a certain amount of activity and you can't get it from just thinking about yourself." (Bruce Nauman)

Today, exhibition visitors' direct participation is a forty-year-old tradition. In 1971, Robert Morris staged a kind of sculptural obstacle-course with his work "BodySpaceMotion" through which the exhibition visitor was meant to move without the need for any specific directions or rehearsals. The wooden seesaw on which the Haus der Kunst visitor can try to maintain his balance was part of the original course. Some objects only exist in cooperation with the viewer, transforming his or her own body into a sculpture. In Franz Erhard Walther's "Für Zwei (Nr. 31, 1. Werksatz)" (For Two [No. 31, First Work Set]) from 1967 two people place a piece of fabric around their necks by each putting his head through one of the two holes. Connected to each other in this way, the two participants face each other for a minute looking into each other's eyes.

During the period in which these works were created, the focus shifted from looking at works without touching them to action and movement. At the same time criticism of the artwork as an object and commodity reached its peak. Like performance and happenings, dance was also a welcome way of dissolving an artwork's object character, thereby evading the art market and, with it, capitalism. Artists of the subsequent generation such as Mike Kelley (b. 1954) and Pablo Bronstein (b. 1977) were able to build on these developments as a precondition. They increasingly shift the focus of choreography to common human actions, whereby their particular interest is in degenerate, artificial and manipulated behaviour.

Mike Kelley's "Test Room Containing Multiple Stimuli Known to Elicit Curiosity and Manipulatory Responses" (1999/2010) is a kind of playroom with oversized objects that the visitor can touch and interact with. This "Test Room ..." also includes several performers: Two alternately carry out tender and aggressive actions with the objects, while two others - at times dressed in a ape costume - imitate the behaviour of apes. The visitor, who had just used the objects as movement aids, suddenly realizes what it is like to be the guinea pig of behavioural scientists.

Pablo Bronstein places an architectural arch in the middle of a room; the arch is decorated with ornaments and refers to the design of public squares in the early Baroque period ("Magnificent Triumphal Arch in Pompeian Colours", 2010). A performer strides around the arch, alluding to it in a theatrical voice ("Oh, what a beautiful arch! It reminds me of ancient Rome"). These behavioural patterns of courtly elegance seem artificial and stilted to today's observer. The social system that the arch represents and that guides the performer's movements appear like a corset and extremely dated.

João Penalva's installation "Widow Simone (Entr'acte, 20 years)" (1996) also revolves around social choreography as a form of control: In a documentary manner, Penalva tells of a dancer who has danced the role of the widow Simone in the ballet "La Fille Mal Gardée" for twenty years. Due to copyright reasons, this dancer does not have the right to pass the choreography on to others and to teach it to Penalva, who was a dancer himself. The dancer is now just the performing marionette.

Xavier Le Roy and Tino Sehgal specify the idea for a course of action without using a single object. Instead, the two artists create the foundation for an interpersonal encounter. In "Production" by Xavier Le Roy and Mårten Spångberg, dancers practice a dance of their choice in the exhibition. In the event that a visitor displays a particular interest in this, the dancers approach him or her and engage in a conversation, which, depending on the visitor's response, can be limited to either a short dialogue or expanded to a tour of the exhibition together. The encounter ends in a performance: The dancers set one of the installations in motion for the viewer. It is the interplay between dancer and visitor here that is the choreography whilst the viewer can have a decisive influence on this.

The works of Tino Sehgal only exist as long as the performer is present. In his contribution to this exhibition, the performer lies on the floor moving very slowly thereby achieving a sculptural effect ("Instead of Allowing Some Thing to Rise Up to Your Face Dancing Bruce and Dan and Other Things", 2000). Variations occur in each performance: The interpreter never executes the exact same sequence of movements, and also the observer reacts differently. Despite the constant changes, Sehgal is able to bestow upon these fleeting events the status of an artwork, by demanding that - like sculptures and paintings - his works are on view for the entire duration of an exhibition. Like his fellow artists of the 1960s, Tino Sehgal also wishes to free artwork from its significance as a pure material object. The possibility of achieving this with choreography seems a given.

A digital archive with films of the most important performances of the last 50 years completes the presentation. "Move" is curated by Stephanie Rosenthal, Chief Curator at the Hayward Gallery in London, and has been adapted for its presentation in Munich by Julienne Lorz. Following its presentation in the Haus der Kunst, "Move" will travel to K20 Kunstsammlung Nordrhein-Westfalen (16 July - 25 September 2011).