Bringing film, two-dimensional images and the structural use of color to bear on sculptural expression, Liz Larner's work demonstrates an innovative approach to the centrality of form. Jason Meadows creates three-dimensional representations of different real and imagined figures inspired by a range of sources: literary, art historical, pop cultural, and even mathematical. 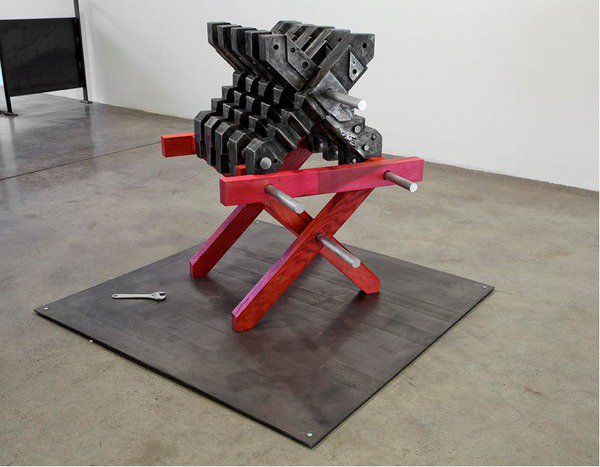 Tanya Bonakdar Gallery is pleased to announce the gallery’s first exhibition of work by Liz Larner. Bringing film, two-dimensional images and the structural use of color to bear on sculptural expression, Larner’s work demonstrates an innovative approach to the centrality of form. The artist presents an atmosphere that allows significance to arise from abstract relationships. Larner uses color to modify and reinvent, rather than reinforce the sculptural form. In this exhibition, Michelangelo Antonioni's first color film, Red Desert, (1964) is taken as a point of departure, as themes from the film are readdressed and reconsidered. Lines and hues create separate illusions, as color and shape express themselves poetically and contribute to the emotional aspects of the works. The sculptures are subversive and sublime - they expand the possibilities of three-dimensional form as well as bring into focus the means by which this expansion is achieved.

Larner’s wall-mounted sculpture, Blue and Green, takes its name from Antonioni’s initial title for Red Desert. Organic forms in porcelain are painted in pure seascape colors of blues and greens, surrounded by reds and darker colors. At the same time, Larner addresses the wall and allows the sculpture to become greater than its technical mass by painting the back of the work; as colors bounce off the white wall, the reflection lends an otherworldly halo.

Her use of color on ceramic is further demonstrated in the works Lentous Rust, made of epoxy and ceramic, along with Disembogue, Transpicuous Brume, and Volitant Solids. Larner’s sculptures maintain a poetic relationship with the film - both present notions of real versus unreal through material and color. Larner uses the film’s palette; eg. mustard colored smoke and clothing, purple skies, hallucinations and painted trees in a new work made to literally engage the ceiling, walls and floors of the gallery. The color variations in the exhibition shift and transform the objects and gallery space. In Planchette, a shimmering surface of dark blue on a gentle, undulating rectangular shape seems to float in front of the wall. The surface space is indeterminate from a distance much like a shot into fog with a telephoto lens.

In a delicate but vibrant group of works on tissue paper, color is presented directly, as Larner paints the paper in bright, bursting tones. The fragility of the medium creates a sensual effect, contrasting strength of colors with the seeming fragility of tissue.

For this exhibition the artist presents smile (alluvium), the most recent in her ongoing smile series. A shiny, faceted upturned arc is placed upon a pool of darkness, formed by a pile of ceramic shards in black. Hints of color rise up, as though emerging from the depths. The reflective black surface is beautiful, but also concealing, ominous, and viscous.

In 6, Larner’s signature use of line and open form has an animated quality of movement and a delicate balance between illusion and reality. Color serves not to reinforce the form but to extend it. This sculpture examines the theme without visual trickery; what we see is real, though enhanced by the nature of the piece’s structure and color. Moving around the artwork while physical reality re-establishes itself, the viewer must renegotiate and grasp the work anew as perceptions are challenged and reconfigured.

Tanya Bonakdar Gallery is pleased to present its fifth solo exhibition of work by Jason Meadows. Meadows creates three-dimensional representations of different real and imagined figures inspired by a range of sources: literary, art historical, pop cultural, and even mathematical. In some, Meadows employs images of fictional personalities (Uncle Sam, Richie Rich, the Monopoly Man, etc.) as metaphors to describe cultural and social situations. The presentation includes a menagerie of characters - fashioned out of rough industrial wood, paint, and metal - whose fabrication undermines their sources and recontextualizes the forms to provoke new meanings. While his work does reference art history, modernism, and philosophies of the past, Meadows' approach remains broadly pluralistic. Rather than exclusively mining modernist art forms, Meadows is committed to a multifarious artistic investigation that translates into intelligent, rigorously developed, and sometimes humorously nuanced work.

In two works, Holly Golightly and Face Case, Meadows draws from Truman Capote's famous novella Breakfast at Tiffany's. Like the story's heroine, Holly Golightly exudes a capricious air and is likewise fashioned to imply movement. The artist's conservative application of basic colors and shapes successfully evokes both a specific imaginary person, as well as the spontaneous, light-hearted attitude that this character has come to epitomize. Further, he transforms simple patterns into the Chanel suit, leopard handbag and flirty earrings of the young socialite. In another nod to Capote, and in keeping with a carnivalesque atmosphere, Face Case employs abstract and multi-colored shapes to suggest a jam-packed party in a tiny New York apartment.

The artist continues his celebration of American culture by bringing to life a trio of teddy bears - generic icons of all things cute and cuddly - with a sinister twist. In this and other works, he applies minimal representational gestures within an abstract format to indicate fictional characters, both general (teddy bears) and specific (Snoopy, Charlie Brown) in three dimensions. In some works, Meadows employs cartoonish images of these fictional personalities from pop culture to convey socio-political commentary. For example, in Do Not Pass Go, we find the figure of Richie Rich, representing the nouveau riche bourgeoisie, overcoming the landed gentry in the form of the monocled Monopoly Man.

The unorthodox wall-mounted sculpture Acid Test Equation investigates the paradox of the American dream while exploring the relationship between old and new. Old-fashioned wrought iron signage displays a small contemporary flag of Uncle Sam, the recognizable figure who embodies both the pioneer spirit as well as the threat of Orwellian autocracy. In this work, Meadows explores the American urge to pioneer and explore unknown landscapes, both external and internal, but all under the watchful eye of "Big Brother."

Several works exhibit fewer literal references and rely more on the artist's improvised abstraction. In Weekend Project, Meadows alludes to masculinity with forms based on a Mustang engine. Unctuous, blackened metal rests on an aluminum plate as rods penetrate the work's wooden base. Here, low-tech materials are transformed into elegant, unidentifiable, yet vaguely familiar designs. In The Conversation, dark-stained wood and would-be furniture parts are tied together with rope, evoking an imaginary S&M contraption. Under closer inspection, the silhouette of two figures locked in conversation reveals itself, as a two-dimensional "word bubble" links the interlocutors. Here and throughout the exhibition, Meadows presents works that hover at the border between abstraction and representation.

Meadows' work is currently on view at the Nasher Sculpture Center, Dallas, TX, as part of the exhibition Alexander Calder and Contemporary Art: Form, Balance, Joy. This exhibition originated at the Museum of Contemporary Art, Chicago and will travel to the Orange County Museum of Art, Newport Beach, CA (April - September 2011) and the Nasher Museum, Duke University (February - June 2012). A catalog was published in conjunction with that exhibition.