Bacon's Not The Only Thing That Is Cured By Hanging From A String. A new series of 13 illuminated lamp posts interspersed throughout the space and a large-scale photomontage wall work. He creates conceptual works with poetic narratives, often combining his interests in the material production of the art object with theories of psychology and dramatic presentation. 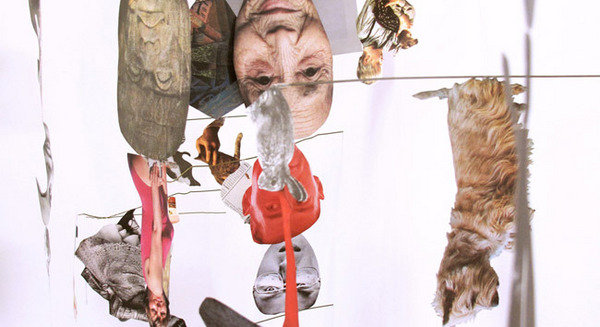 Casey Kaplan is pleased to announce the exhibition Geoffrey Farmer, “Bacon’s Not The Only Thing That Is Cured By Hanging From A String.” This will be Farmer’s first solo exhibition both at the gallery and in the United States.

Farmer is known internationally for his projects that transform and alter over the course of their exhibitions. His installations are composed of diverse materials and various working methodologies that are rooted in research and in response to site. Farmer creates conceptual works with poetic narratives, often combining his interests in the material production of the art object with theories of psychology and dramatic presentation.

Central to this exhibition, Farmer presents a new series of thirteen illuminated lamp posts interspersed throughout the space. The lamp posts hover between the architectural and figural, as each is comprised of found objects, photomontage materials, props and a light source. The wood posts developed out of Farmer’s interest in Rainer Werner Fassbinder’s, “In a Year with Thirteen Moons” and its opening text:
“Every seventh year is a year of the moon. Certain people, whose existence is influenced mainly by their emotions, suffer from intense depressions in these moon years. This is also true to a lesser degree of years with thirteen new moons. And when a moon year is also a year with thirteen new moons, it often results in inevitable personal catastrophes...”

Along with this series, Farmer will also present a large-scale photomontage wall work titled, “Pulling Your Brains Out Through Your Nose,” which makes reference to the Egyptian mummification process of extracting the brain in order to preserve the body. A multitude of images, cut from various printed sources, are suspended from cut coat hangers and inserted directly into the gallery wall.

In the series, “Lost Dogs and Half-Eaten Apples,” Farmer presents smaller figural works displayed on a low table. Made mostly of clay, wire, bricolage, and lights, these maquette-like pieces read and reference as unusual types of puppets or Kachina dolls. Images are inserted directly into the clay forms, accentuating the materiality of the printed image and their ability to transform, by illusion, into three-dimensional form.

Geoffrey Farmer is currently based in Vancouver. Past solo exhibitions include: Walter Phillips Gallery, The Banff Centre, Banff Alberta (2010), Museo Experimental El Eco, Mexico City, Mexico (2010), Witte de With, Rotterdam, The Netherlands (2008), and the Musée d’art contemporain de Montréal, Quebec (2008). Farmer will open, “Let’s Make the Water Turn Black,” on March 5th at the REDCAT in Los Angeles after completing a month long residency there. The artist will also be participating in the Istanbul Biennial opening September 17 and will have a major solo exhibition planned to open at the Vancouver Art Gallery, Canada in 2013.

The gallery will have extended hours on march 4, 2011, from 6-8pm, to launch the publication, Drawing room Confessions including its latest issue #2: Jason Dodge.