Shh! The Tableaux of Silence. The exhibition comprises sculptures, watercolours and photographs. Artist's primarily white world is inhabited by animals that may have human qualities and by people with heads emerging from or sinking into strange, organic substances or architectonic tableaux. 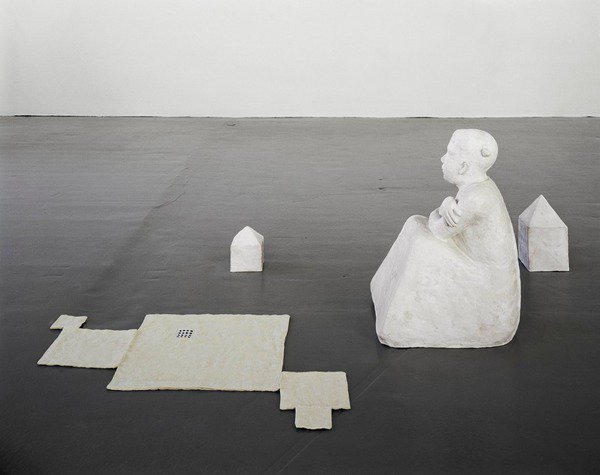 Bianca Maria Barmen will be showing a major solo exhibition at Kunsthallen Brandts. The Swedish artist has a personal and philosophical approach to sculpture that is all her own—it is as if she creates haiku poems in plaster of Paris.

Contemporary sculpture today is multi-faceted: there is no limit to the range of sculptural materials being used. Sculpture has long since descended from its base and crept out into the room, while at the same time becoming conceptually tied to its material. Some visual artists also choose to work in sculptural materials previously considered traditional: plaster, bronze and marble.

Bianca Maria Barmen's primarily white world is inhabited by animals that may have human qualities and by people with heads emerging from or sinking into strange, organic substances or architectonic tableaux. In and around Bianca Maria Barmen's works a hypnotic sense of silence or loneliness reigns. Roger McDonald, writing in the exhibition catalogue, compares Barmen's sculptures to Japanese Butoh dancing which consists of series of slow, meditative movements inspired by T'ai Chi and Qi Gong. Else Marie Bukdahl relates Bianca Maria Barmen's sculptures to the view expressed by Michel Serres in his book Statues, that sculpture represents a special path to recognition:

"In several of her sculptures there is secret realm from which society's rapid, texturally-lacking stream of images meets resistance in a particularly intense way. Her sculptural works appear as strong points from which to take bearings, or mysterious monuments that counteract the transient nature of our surroundings."

Bianca Maria Barmen's sculptures are difficult to define. They are like a perfect haiku poem in which both rhythm and content would collapse if one dared remove even a single letter.
The exhibition comprises sculptures, watercolours and photographs.

About the Artist
Bianca Maria Barmen was born in Malmö in 1960, but now lives and works in the Swedish town of Lund and in Cambodia. She received her education at Arkitekthögskolan in Stockholm and at the Royal Danish Academy of Fine Arts in Copenhagen where she studied with Bjørn Nørgaard. Her work is represented at Moderna Museet, Stockholm; Helsingborgs Museer/Dunkers Kulturhus, Helsingborg; Skissernas Museum, Lund, and elsewhere. She has participated in many group exhibitions in Scandinavia and has had several solo exhibitions, particularly in Sweden. In recent years Bianca Maria Barmen has received a number of major travel grants and awards, and has lived and worked in Japan.