An exhibition that explores complex processes of land appropriation and different forms of popular resistance which incorporate a fundamental criticism of the logic of private property as the foundation of an economic and political system -liberal capitalism- and of a logic of fragmented social relationships. The works in the exhibition explore specific cases and articulate varied relationships between them through the different times and places examined. For Next cycle: Iranztu Lekue and Amaia Gracia + Ines Bermejo. 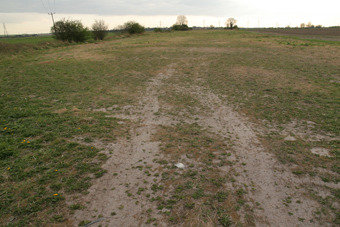 With the Money they made by stealing our land
They have bought themselves some time-
Air time
Water time
And underground time.
By that they believe that they have bought history.
(From the poem “Buying Time” by Jimmie Durham, in Columbus Day, Albuquerque: West End Press, 1983)

"¿Tierra de nadie?" (No Man's Land?) is an exhibition that explores complex processes of land appropriation and different forms of popular resistance which incorporate a fundamental criticism of the logic of private property as the foundation of an economic and political system—liberal capitalism—and of a logic of fragmented social relationships. From the enclosure of the commons in the Middle Ages in England to colonial usurpation and the most recent strategies of appropriation of vast territories, the tenure and use of the land have been unequally negotiated between accumulation and the struggle of smallholders, between privatization and communal use.

These opposing processes of colonial and capitalist appropriation on the one hand, and of popular demands on the other, do not constitute a simple opposition. By using different media, the lines of research of the artists included in "¿Tierra de nadie?" reach different dimensions to those of academic research. Rather than presenting conclusions, the works shown here are capable of showing ramifications, complexities and paradoxes; to ask questions, and above all, to reveal specific histories. Far from offering an exhaustive geographical and historical analysis of the subject, "¿Tierra de nadie?" seeks to create a platform for reflection-that arouses from artistic practice-from which to point at an aspect of economic history which has always been subject to dispute, even now that the virtual dynamics of the global financial system seem to overshadow the crucial issue of the ownership and use of land.

The works in the exhibition explore specific cases and articulate varied relationships between them through the different times and places examined. From the privatisation of the commons and the proletarisation of the peasantry (Olivia Plender) to current strategies to establish legal frameworks for common tenure (Amy Balkin), the issue of the land is examined from the point of view of colonisation and the liberation struggles in different contexts (Mathieu Kleyebe Abonnenc, Maria Thereza Alves, Andrea Geyer, Ana María Millán), the current uses of the land and the discourses that legitimise them (Jimmie Durham), the popular movements of resistance and occupation (Abraham Cruzvillegas) and the ways of life, which are almost impossible today, in which the land is travelled rather than inhabited (José Arnaud-Bello, Vasco Araújo).

To complement and expand the issues approached in the exhibition, a documentation area has been organised, where some cases may be explored in greater depth. Additionally, a two-day course has been scheduled, and will include the contributions of artists, historians and filmmakers, all of whom have delved into these issues in their respective disciplines.

NEXT is a bimonthly cycle of exhibitions in collaboration between Montehermoso and the Faculty of Fine Arts of the University of the Basque Country. This programme tries to make visible the projects by artists undergoing a process of "professionalisation". Iranztu Lekue (Vitoria-Gasteiz, 1987) and Amaia Gracia + Inés Bermejo (Pamplona, 1985; Getxo, 1986), were selected at the last open call process.

Inés Bermejo and Amaia Gracia have come together to produce the project Instantanéité, which was born from the visual and narrative motivation found in the film Le petit Soldat by J. L. Godard.
In the film’s main scene, the two protagonists meet during a photo session.

Godard’s scene situates us in the space of the day-to-day. Under the interpretation and staging of his symmetry we enter a play of representations which we materialise through photography and the audiovisual. The resources of each discipline enable to articulation of suspended, camouflaged, discordant and undefined in time narratives, which highlight the capture of the repetition of the image, of suggested movements, the gestures from the daily life of the individual, the frozen, that which is articulated in the strict sense of the word.

In our work process we have focused on travelling through our own workspace, creating an atmosphere which reflects the film. In this way, the image presented of the characters is recreated and expressed through the image of its authors, as well as in the models (and artists) Esther Estevez and Mireya Martin Larumbe. During the sessions and actions, a series of repeated movements were created, without allowing them to ever conclude. They do not aim to offer a function, either begun or concluded, nor do they tell a story, nor are they consistent, nor do they leave traces or visible signs on time. We reinterpret a Godard sequence, without developing it; we repeat it to interrupt it in the visual image of our pieces, questioning the issues it poses to formulate new questions around the image.

The Parkett magazine was founded in Zurich in 1984 by a group of friends, with the idea of generating an open exchange between artists and writers on art in Europe and the United States. With this in mind, Parkett opened offices in Zurich and New York and articles have always been published in both German and English. From the start the magazine did not restrict its activity to writing about artists but entered into close collaboration with them. Not only is the work of leading international artists analysed in essays by writers and critics, but artists are also invited to participate in editorial work by choosing writers as well as collaborating in cover and spine designs for each individual edition. Each artist also creates a work of art, specially produced for Parkett in limited edition, signed and numbered, offered for purchase to the magazine's subscribers. These works have covered a wide range of media including magazine inserts, painting, photography, drawing, sculpture, video, DVDs and sound.

In 2009, the University of Castilla- La Mancha received the donation—from Helga de Alvear—of all numbers of the journal and its artists' editions published since 1984. In order to ensure its conservation and future dissemination, the Parkett collection has been given a permanent home at the Fine Arts Faculty, Cuenca.

Centro Cultural Montehermoso Kulturunea
Fray Zacarias Martinez, 2 - 01001 Vitoria-Gasteiz (Spain)
Hours
From Tuesday to Sunday, from 11 to 14 and from 17 to 21.
Closed on Monday.