In 'One after another, a few silent steps' is the most comprehensive survey of the Pedro Cabrita Reis's works to date, and brings together about 60 works dating from 1985 until 2010, sculptures, paintings, photographs and installations. The exhibitions rather presents itself as a succession of actions, creating a certain specific spatial tension. Freek Wambacq investigates the connections between sculpture, installation and architecture. In so doing, the artist makes use of everyday, sometimes even absurd-looking objects and artisanal materials and techniques. 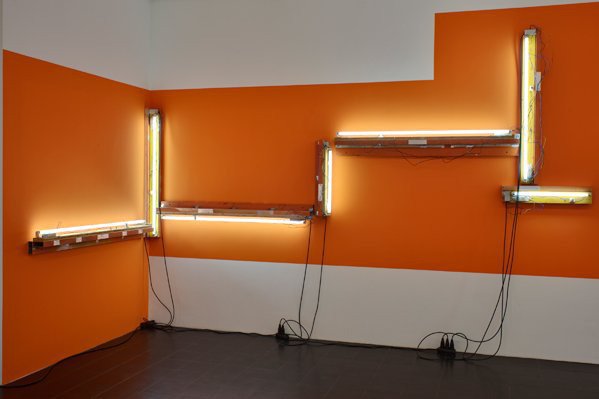 Pedro Cabrita Reis
One after another, a few silent steps

One after another, a few silent steps will be Cabrita Reis' first retrospective show in Belgium. It is the most comprehensive survey of the Portuguese artist's works to date, and brings together about sixty works dating from 1985 until 2010, sculptures, paintings, photographs and installations.

The work of Pedro Cabrita Reis (Lisbon, °1956) revolves around themes such as housing, living spaces, construction and territory. Drawing inspiration from daily life, he combines commonplace objects such as tables, chairs and doors with industrial materials. Cabrita's work is crucial for the understanding of the new paradigm in sculpture that has come about since the middle of the 1980s. His complex oeuvre is marked by a highly individualized philosophical and poetic discourse, and encompasses a variety of media. Using simple materials, Pedro Cabrita Reis recycles through constructive processes, almost anonymous memories of primordial gestures and actions that we repeat every day. His works touch on issues of space, architecture and memory, with a suggestive power of association that goes beyond the visual to a metaphorical level.

Almost minimalist in its use of beams, aluminium frames, the symbol of modern architecture, verging on Arte Povera in the use of everyday items, Cabrita Reis's work adds a singular voice to this history of recent art. It also bears the stamp of the Mediterranean and traces of an ancient thought. At the same time the work will take you out of your comfort zone. The exhibitions rather presents itself as a succession of actions, creating a certain specific spatial tension.

While he does uses 3D space, Pedro Cabrita Reis is more than just a sculptor. His oeuvre can truly call upon the main categories of art. The fluorescent tubes, one of the artist's preferred materials, while producing a halo of light, determine a line like the one the pencil draws on a sheet of paper. The aluminium front frames, the plaster, the safety glass panels, the bricks, the mere electric cable etc.; all these materials contribute towards a system of representation without losing any of their mysterious everyday quality as objects. These works challenge the boundary between the inside and outside, between construction and object.

In 2010 the exhibition was on show in Hamburger Kunsthalle and the Musée Carré d'Art in Nîmes, and it will travel later in 2011 to the Museu Colecção Berardo in Lisbon.

Pedro Cabrita Reis
Pedro Cabrita Reis was born in Lisbon in 1956, where he lives and works. He has participated in many important international exhibitions. Among others, his work was shown at Documenta IX Kassel in 1992, at 22nd and 24th São Paulo Biennales, respectively in 1994 and 1998, at the Venice Biennale Aperto in 1997. In 2003 he represented Portugal at the Venice Biennale. Since then his work has been featured in many museum exhibitions.

An English catalogue is published by Editions Hatje Cantz, with essays by Antonio Lobo Antunes, Dieter Schwarz, Sabrina van der Ley and Markus Richter, and written notes by the artist.

The work of Freek Wambacq (Belgium, °1978) often arises from chance encounters and personal discoveries. He investigates the connections between sculpture, installation and architecture. In so doing, the artist makes use of everyday, sometimes even absurd-looking objects and artisanal materials and techniques.

Below the surface of these deceptively simple objects, however, there is a tangle of various stories, sociological commentaries and recurring architectural or art historical references that add numerous dimensions to the aesthetic qualities of the work. Wambacq’s artistic creation is both material and conceptual, thus creating a critical link between the art world and the world itself.