Indian Highway, 2nd season, episode IV: an exhibition in the form of a road movie presenting a panorama of Indian contemporary art in the work of 31 artists. Monumental works, site-specific installations, a focus on the Studio Mumbai, plus the reconfiguration of the curatorial project by Bose Krishnamachari. The title reflects the importance of migratory fluxes in the modern world. Pascale Marthine Tayou: known for his assemblages, paintings and installations, the materials for which are provided by objects discarded by society, he deals with worrying, contemporary issues with a strong socio-political resonance. 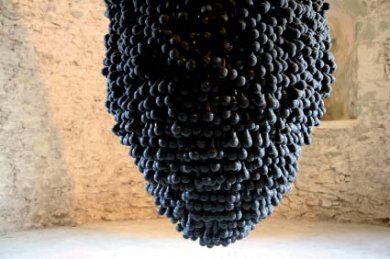 In February 2011, macLYON is putting on Indian Highway IV, an exhibition in the form of a road movie presenting a panorama of Indian contemporary art in the work of 31 artists. It will occupy a space of 2,000 square metres over two floors, which are being specially reconfigured for the occasion.

General Curatorship:
The artistic direction is placed under the supervision of Julia Peyton-Jones, Hans Ulrich Obrist and Gunnar B. Kvaran.

Lyon Curatorship:
Thierry Raspail, Director of the Lyon Museum of Contemporary Art, is the curator of this exhibition. Thierry Prat, Production Manager is responsible for the exhibition design. Their visits to art studios in Mumbai and New Delhi in June 2010 were organized and guided by Vidya Shivadas and Deepti Mulgund, with the collaboration of Bose Krishnamachari.

After London (Serpentine Gallery, 10.12.08 > 22.02.09), Oslo (Astrup Fearnley Museet, 02.04.09 > 06.09.09), Herning (Museum of Contemporary Art, 13.03.10 > 12.09.10), Indian Highway is stopping in Lyon for 5 months and taking on a new dimension: 2000 square metres, 31 artists (some already prominent on the international circuit, others youngsters or less well-known), monumental works never seen before, site-specific installations, a focus on the Studio Mumbai (winner of a special jury award at the 2010 Venice architecture biennial), plus the reconfiguration of the curatorial project by Bose Krishnamachari (general curator of the upcoming Kochi Biennial in Kerala, India, in January 2011).

After Lyon, Indian Highway is heading on to the MAXXI in Rome, then to Moscow, Singapore, Hong Kong, São Paulo and Delhi.

Originally conceived by Julia Peyton-Jones, Hans Ulrich Obrist and Gunnar B. Kvaran for the Serpentine Gallery (London) and Astrup (Oslo), this exhibition, which reflects the new global artistic economy, will go through ten successive permutations, defined by 10 new curators. Thus each local incarnation of this permanent work in progress will be different, and Indian Highway will offer a complete image of itself only at the end of its tour – at the end of its multiple interpretations.

This new curatorial principle is a response to today’s flux, to its controversies, contrasting critical voices, varied forms of knowledge and ignorance, different perspectives and traditions, postcolonial attitudes and subaltern studies. It offers the only viable approach in this late modern period if we are to grasp the complexity of culture and the plasticity of art.

The conventional, generic, thematic and closed exhibition (irrespective of theme) is now obsolete – that is, if it is produced in the traditional, unilateral manner, from the authority of a single centre or institution, and sent out prefabricated, ready to circulate and be consumed.

In contrast, Indian Highway adopts a method that does its utmost to get away from the old-fashioned thinking that always assumed an "over there"; it seeks to avoid notions of "exoticism" and to mix and layer differing histories and movements of interpretation.

THE EXHIBITION
The title, Indian Highway, reflects the importance of migratory fluxes in the modern world, the impact of movements of thought and the importance of links between rural and urban communities. Some works refer to "information superhighways," others express current forms of engagement, often of a political nature, with regard to today’s fast-changing Indian society, with its issues of gender, subordination, religious sectarianism, clan mentalities and, of course, globalisation.

For the Lyon stage of Indian Highway IV, Thierry Raspail has decided to focus on Studio Mumbai Architects, working in association with the artist Michael Anastassiades, in order to create a big installation at the centre of the 2nd floor space of the macLYON.

An important place is also given to Subodh Gupta. In this exhibition, he presents Take Off Your Shoes and Wash Your Hands, an exceptional work in terms of its size (over 25 metres long), an installation and a video piece.

At the MAC Lyon, the Indian Highway IV exhibition begins in the museum entrance area and is spread out over the two floors, each measuring 1000m2.

Catalogue A new version of the Indian Highway IV catalogue (Koenig Books) will be edited for this occasion, incorporating the artists exhibited in Lyon in 104 additional pages, over 300 pages in total.

In the MacLyon, the exhibition begins in the museum entrance hall and carries on to the last floor of the museum, which is one of the places of the art trail through the city of Lyon.

Sculptures, paintings, drawings, photography, installations – an exhibition with a powerful visual impact where the senses and the imagination compete fiercely with each other.

“For me, making an exhibition is celebrating life. i try to find out where i’m at in my head. I always see my exhibitions as a mixture of salt and sugar. it’s life. You’re always happy and then sad just afterwards, and it starts again and there’s harmony – a bit of light and a bit of darkness. When i make an exhibition, i try to play with the question of the human condition.”
Pascale Marthine Tayou

Always All Ways is the result of close collaboration between the artist, the Malmö Konsthall (Sweden), the Musée d’Art Contemporain in Lyon and Veduta - Biennale de Lyon. These words by Pascale Marthine Tayou could be taken to sum up what he is about: “Like everyone else, I am three thousand years old”.

The artist takes on the history of the world and, wherever he stops, gets everyone there involved.

Self-taught, his work is best experienced rather than explained. Known for his assemblages, paintings and installations, the materials for which are provided by objects discarded by society (recycled materials gleaned in Africa or from the nearby supermarket, piles of paper torn into strips, gutted fridges, rags, used clothes...), Pascale Marthine Tayou deals with worrying, contemporary issues with a strong socio-political resonance.

Installations, collages, photos, sculptures, “dolls”, re-used appropriated objects, videos, new creations – through forty or so of his works, Pascale Marthine Tayou invites the viewer into his joyous, mysterious and bewitching universe, one that is marked by humour and which encourages the viewer to question his / her vision of the world, of the Other and of him / herself. Pascale Marthine Tayou’s work is an experience to be lived according to one’s own rhythm or feelings.

The art trail through Lyon Tayou

“Whenever I organise an exhibition, it’s the start of something new that has to do with the place I’m in and what comes to my mind. [...] Site-specific is the domain of true freedom, it is taking power over risk. It is what gives art such intense joie de vivre.”
Pascale Marthine Tayou

Every interlocutor is, in principle, a good interlocutor whether he or she is a specialist, distracted or a tourist. What matters is the creativity and the dialogue, the appropriation and dealing with difference, not in order to reduce it, but to polish its shine and bring out its density.

The first interlocutor is space. Pascale Marthine Tayou speaks with the location. The work takes physical form only in the place where it manifests itself. How could it be otherwise? That is why this same project takes totally different, or even incomparable forms in Lyon and Malmö: by the wonder of contexts and poetic phrases.

In Lyon, Pascale Marthine Tayou wants to exhibit, he says, “at anyone’s place”. That is one of the challenges: to exhibit Tayou’s work in an office, at school, in public space, or even in the museum...

“I am not an artist. I reveal myself to you as I am, and that’s all.”
Pascale Marthine Tayou

Pascale Marthine Tayou’s work is exhibited in an art trail accross several areas of Lyon: a square, a profundity of church, a police station, a restaurant, shops...

“This is an exhibition wherein everyone had the possibility to become his / her own test tube. What I say and what i think is not different from you. I am like you; I am a part of you. It is primarily a human adventure.”
Pascale Marthine Tayou

Pascale Marthine Tayou was born in 1967 in Yaounde (Cameroon). He lives in Ghent (Belgium).

A catalogue entitled Always All Ways is conceived and co-edited by the Lyon Museum of Contemporary Art and the Malmö Konsthall. The catalogue offers photographs of the exhibition and also includes essays by Jacob Fabricius, Director of Malmö’s Konsthall, Thierry Raspail, Director of the Lyon Museum of Contemporary Art, Bernard Blistène, Director of the Cultural Development Department of the Centre Pompidou, as well as an interview with the artist Pascale Marthine Tayou, conducted by art critic Pernille Albrethsen.