Picasso. The Power of Eros

The Kunstmuseum Bern is showing the world-famous artist Pablo Picasso with around 100 of his prints from the Georges Bloch collection. Bloch, by virtue of his profound understanding and connoisseurship of Picasso's prints, acquired a collection comprising, around the time the artist died, about 2000 sheets of linocuts, woodcuts, etchings, copperplate engravings, dry points, aquatints, and lithographs - very often first impressions. 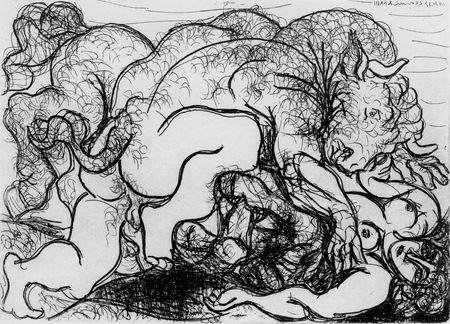 The Kunstmuseum Bern is showing the world-famous artist Pablo Picasso with around 100 of his prints from the Georges Bloch collection. The Zurich textile industrialist Georges Bloch (1901-1984) began collecting Picasso’s prints around the mid-1920s and, with his extensive knowledge of the art and the artist, acquired a highly representative and extensive collection. He donated around one quarter of it to the Gottfried Keller Foundation, which had the holdings deposited in eight different Swiss fine art museums. Our exhibition foregrounds subject matter that fascinated and preoccupied Picasso his life long, and especially in printmaking: The Power of Eros.

Picasso fervently experimented with a great variety of different printmaking methods, producing prints that boast a great ease and facility in the medium. For our exhibition we have selected his prints from the Georges Bloch collection that foreground the desiring female body and its desirability. Preoccupation with themes such as Eros, love, passion, and lust were, from the beginnings, omnipresent in art. In treating such subject matter Picasso was very explicit with the exception of a few early drawings displaying his symbolical handling of eroticism. It was only in the 1950s that the theme had a real breakthrough in Picasso’s art, dominating his late work and, in particular, the prints. It was as if the aging artist fought a battle against his mortality and inevitable end with all the vitality he could possibly muster. The works in the exhibition likewise adopt and allude to the theme of the “painter and his model.” By exploring this relationship he highlighted especially the constellation of the painter standing before the easel in various costumes and surrounded by his models.

A comprehensive collection
The Zurich textile industrialist Georges Bloch (1901-1984) collected Pablo Picasso’s (1881-1973) prints from the mid-1920s onwards. However, it was not until 1953 that he became personally acquainted with the artist after being introduced to him by Bernhard Geiser, the author of the first oeuvre catalogue of Picasso's prints. The collector and the artist soon became friends. Bloch, by virtue of his profound understanding and connoisseurship of Picasso’s prints, acquired a collection comprising, around the time the artist died, about 2000 sheets of linocuts, woodcuts, etchings, copperplate engravings, dry points, aquatints, and lithographs – very often first impressions.

Georges Bloch’s generous gift to the Gottfried Keller Foundation
In 1972, the Gottfried Keller Foundation received Georges Bloch’s gift of 473 artworks, amounting to approximately one quarter of his collection. It was supplemented by gifts of a total of 39 additional works following in two lots in 1979/80 and 1981/82. The Gottfried Keller Foundation had the total holdings of over 500 sheets deposited in eight Swiss museums: besides in the Kunstmuseum Bern, their new homes are now also in the Kunsthaus Zurich, the Kunstmuseum Basel, the Bündner Kunstmuseum Chur, the Musée d’art et d’histoire in Geneva, the ETH Zurich’s print collection, the Musée Jenisch Vevey, and the Kunstmuseum St.Gallen. The only stipulation Bloch made was that the museums were to present a selection from the gift to the public every five years by turns. Now the Kunstmuseum Bern is in line again to give audiences the opportunity of viewing some of the gems from this rich collection of Picasso prints. The first exhibition of this kind took place in 1972/73 in the Kunstmuseum Bern – and since then presentations have been organized on a regular basis at all the seven other locations of the holdings, always pursuing a new thematic focus.