The exhibition presents the 'Jack Freak Pictures', the most symbolic, philosophically most elaborate and visually striking art Gilbert & George have ever created. Within Gilbert & George's oeuvre as a whole they constitute the powerful concentration of the themes and emotions that the artists have now been exploring in their art for more than 40 years. 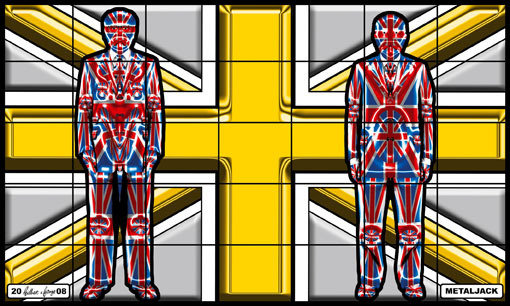 With its major spring show, Deichtorhallen Hamburg is once again bringing stars of the international art world to Hamburg. Gilbert & George (born 1943 and 1942) have long since been acknowledged icons of contemporary art.

The exhibition will present the latest, wide-ranging group of pictures they have ever created. Called the “Jack Freak Pictures”. They will be on display in the cathedral-like setting of the large Deichtorhalle from February 25 to May 22, 2011 for the first time more or less in its entirety – some 120 pictures will be on view.

Gilbert & George´s large-format pictures present decidedly sacred and secular themes. In this case, Gilbert & George have created a group around the British national symbol, the Union Jack, with all its different connotations, from symbol of national pride through to the cult symbol of the British Pop Music world and countercultures. Surrounded by medals and amulets, the streets of London and the red, blue and white design of the British flag, as in their previous art here Gilbert & George are not only the creators of their own world of images, but also act as protagonists in it.

The “Jack Freak Pictures” are among the most symbolic, philosophically most elaborate and visually striking art Gilbert & George have ever created. Within Gilbert & George’s oeuvre as a whole they constitute the powerful concentration of the themes and emotions that the artists have now been exploring in their art for more than 40 years. In these pictures, the artists play the roles of both victim and monster, puppets of a cosmic revue, sleepless guardians of empty big-city streets and crazy-looking talking heads, as Michael Bracewell outlines in his essay in the exhibition catalog. The large pictures, do not address the individual constitution of the two artists but instead point up states of human existence and can be read as a description of the modern world from the artists’ point of view.

The exhibition is being organized by Deichtorhallen Hamburg and the British Council and will move on from Hamburg, albeit it on a smaller scale, to Lentos Kunstmuseum, Linz, Austria. Hatje Cantz Verlag has brought out a catalog with an essay by Michael Bracewell and color illustrations of all 153 works in the series.
CAPSULE BIOGAPHIES

Since 1967, Gilbert (born Sept. 17, 1943 in St. Martin / Italy) and George (born Jan. 8, 1942 in Devon, England) have formed the artist duo Gilbert & George. With the idea of using themselves as living sculptures, as the material of their art, in the 1960s they extended the notion of sculpture. Since then Gilbert & George have constantly created new variations in their art that shed light on the context of life in society today.