Paris through the Window: Marc Chagall and his Circle

As a center of cosmopolitan culture and a symbol of modernity, Paris held a magnetic attraction for artists from Eastern Europe during the early decades of the 20th century. This exhibition includes around 40 paintings and sculptures by artists whose work was both imbued with the spirit of modernism and informed by their own cultural heritage. The exhibition focuses in particular on the paintings Chagall made between 1910 and 1920. 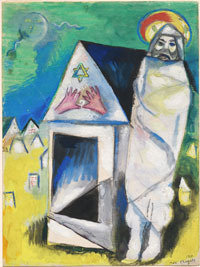 As a center of cosmopolitan culture and a symbol of modernity, Paris held a magnetic attraction for artists from Eastern Europe during the early decades of the 20th century. Most painters and sculptors settled around Montparnasse, which was sprinkled with cafes, and art galleries. It was here that Alexander Archipenko, Marc Chagall, Moïse Kisling, Jacques Lipchitz, Louis Marcoussis, Amedeo Modigliani, Chana Orloff, Jules Pascin, Margit Pogany, Chaim Soutine, and Ossip Zadkine established studios and discovered each other’s work. This exhibition will include around 40 paintings and sculptures by these émigrés, whose work was both imbued with the spirit of modernism and informed by their own cultural heritage. The exhibition will focus in particular on the paintings Chagall made between 1910 and 1920, including Half Past Three (The Poet), of 1911, one of the treasures of the Philadelphia Museum of Art.

Paris Through the Window: Marc Chagall and His Circle, which highlights an exceptional strength of the museum’s holdings of early modern art, is presented in conjunction with a new international arts festival in Philadelphia that is being organized by the city’s Kimmel Center and will run from April 7 to May 1, 2011.
“Paris Through the Window: Marc Chagall and His Circle represents the Museum’s contribution to this festival and will focus on the powerful influence that Paris had on Chagall and his contemporaries,” said Timothy Rub, the George D. Widener Director and CEO of the Museum. The curator of the exhibition, Michael R. Taylor, the Muriel and Philip Berman Curator of Modern Art at the Museum, continued: “This exhibition provides a unique opportunity to reconsider the cross-fertilization of ideas that took place in the French capital during the 1910s and 1920s, which was one of the most experimental and creative periods in Western art.”

Shortly after arriving in Paris in 1911, Marc Chagall rapidly assimilated the pictorial language of the most avant-garde artistic styles of the day, especially Cubism, and married it with the artistic traditions of his native Russia. Chagall developed his own remarkably inventive visual language while living and working at La Ruche (the beehive), so named because of its distinctive cylindrical shape and honeycomb-like maze of artists’ studios. Located on the southwestern fringe of Montparnasse, La Ruche was a three-story-high building with a staircase in the center and studios radiating out from its core. Founded by the French sculptor Alfred Boucher, who converted the original domed central building into a series of small, wedge-shaped studios with large windows that provided excellent lighting, La Ruche opened in 1902 and, since the rent was minimal and artists’ models were supplied free of charge, it quickly became a thriving artists’ community, with its own theater and exhibition schedule. “In La Ruche,” Chagall later said, “you either came out dead or famous.”

By the time Chagall moved there, La Ruche already held a large population of Eastern European artists who had moved to Paris to discover firsthand the most recent trends in modern art. Liberated from the often strict and rigid academic training of their former homelands, they experienced the vibrant artistic interchanges that made Paris such an attractive place to live and work as well as unparalleled exhibition opportunities. Among the other artists to live in or frequent La Ruche in the 1910s were Archipenko, Kisling, Lipchitz, Soutine, and Zadkine, who will be represented in the exhibition by two monumental sculptures in cedar wood that have not been displayed at the Museum since 1963. These émigrés, many of whom were Jewish, were also attracted to the religious tolerance of the French capital, which provided a safe new working environment free from the pogroms and persecution that their families had endured for generations in their former homelands of Russia, Poland, and other Eastern European countries.

The French artist Fernand Léger also worked at La Ruche during this time, as did the Italian painter and sculptor Amedeo Modigliani, whose libertine behavior made him one of the most colorful personalities of this bohemian enclave. While sculptors and painters like Archipenko, Lipchitz, Marcoussis, and Zadkine experimented with the interlocking planes and sharply angled forms of Cubism, other artists attempted to reconcile modern art’s abstract geometries with the folk traditions of their native lands. Chagall’s brightly colored, folkloric paintings often make reference to the customs and rituals of Jewish life in Vitebsk in his native Russia (now Belorussia), although his monumental 1911 painting Half-Past Three (The Poet), made shortly after his arrival in Paris from art school in Saint Petersburg, reveals—quite literally—the head-spinning impact of Cubism, which encouraged him to incorporate fragmented planes and diagonal shafts of color into his compositions. During his early years in Paris, Chagall studied at the Académie de la Palette with the French Cubist painter Jean Metzinger, whose brightly colored geometric compositions undoubtedly informed Half-Past Three (The Poet) as well as other works from this period.

The exhibition will be largely drawn from the Museum’s outstanding collection of modern painting and sculpture, but this will be supplemented with a handful of key loans from museums and private collections in the United States and Europe. These include one of Chagall’s most famous works, the early masterpiece Paris Through the Window, of 1913, from the Solomon R. Guggenheim Museum in New York, which presents a kaleidoscopic impression of the city of Paris as seen from Chagall’s studio window at La Ruche. The deployment of strong, non-naturalistic color in this painting reveals the influence of Chagall’s friend Robert Delaunay, who developed a more colorful and poetic variant of Cubism known as Orphism. The motif of the Eiffel Tower, which dominates the background of Paris Through the Window, was also a central feature of Delaunay’s work at this time, although the Janus-headed man and the sphinx-like cat in the foreground belong to Chagall’s imagination alone and imbues the work with a dream-like otherworldliness. Another important loan to the exhibition is the 1915 painting The Poet Reclining from the Tate Modern in London, which belongs to the same series of euphoric poet paintings as Half-Past Three (The Poet), which Chagall made four years earlier. In his first years in Paris, the artist counted among his closest friends the poets Guillaume Apollinaire and Blaise Cendrars, both of whom wrote eloquently about his work, and these delightfully tumultuous paintings address the themes of poetic reverie, fantasy and inspiration that also characterized his own approach to art-making.

Like many of the La Ruche artists, Chagall returned to his homeland following the outbreak of World War I, which would have a deep impact on his future work, as seen in Wounded Soldier, of 1914, and The Smolensk Newspaper of the same year. In this poignant painting, a young man reacts to the newspaper headline regarding the outbreak of the global conflict with a mixture of terror and disbelief, surely realizing that he would be called up for military duty in the Russian army, while the older bearded man pensively reflects on the wars he has seen during his long life.

During the war years Chagall continued to paint scenes that are evocative of his childhood in Vitebsk, such as Purim, of 1916-18, which remains one of his best-known and most beloved paintings of Jewish village life before the Russian Revolution. In 1923 Chagall returned to Paris at the request of the French art dealer Ambroise Vollard, who commissioned the artist to create a 100-plate cycle illustrating La Fontaine’s Fables, one of the most revered works of French literature. This project dominated his work from the mid-1920s to the early 1930s, as seen in The Watering Trough, of c.1925, where the bent-over female figure and smiling pig share the sense of otherworldly fantasy and charm that Chagall similarly expressed in the gouaches and prints that he made for the Fables project. The community of artists, writers, and musicians that sprang up in Montparnasse before World War I thrived for three decades, until the occupation of Paris by German troops on June 14, 1940. Like many Jewish artists, including Kisling and Lipchitz, Chagall spent World War II as a refugee in New York, having fled the catastrophe that now enveloped his beloved Paris.

This exhibition was organized by the Philadelphia Museum of Art and is presented in conjunction with the Philadelphia International Festival of the Arts (PIFA), inspired by the Kimmel Center, on the theme of “Paris: 1910-1920." The exhibition is funded in part by The Pew Charitable Trusts. Additional support is proudly provided by Bruce and Robbi Toll and by Ovation and Comcast Xfinity.

The Philadelphia International Festival of the Arts (PIFA), inspired by the Kimmel Center, will place Philadelphia’s cultural scene onto the world stage with a month-long festival offering performances, exhibits and events. Based on the philosophy of collaboration, innovation and creativity, PIFA’s programs represent every arts discipline and include more than 100 partners. Offerings include newly commissioned works, classical performances and exhibits, surprising partnerships featuring local and international artists and exciting explorations of traditional, non-traditional, new and emerging art forms. In homage to the artistic energy of Paris 1911-1920, PIFA celebrates works from that era and new creations inspired by the brashly innovative spirit of the period. The festival was made possible by an extraordinary grant from Philadelphia philanthropist Leonore Annenberg, whose vision for a city-wide celebration of the arts shaped its philosophy and programming. PIFA takes place April 7-May 1, 2011.