The exhibition presents a selection of important works from the museum's collection together with several special guest artists. In this last part of Play Van Abbe, visitors are invited to play a role whilst visiting the museum; the roles are the pilgrim, the tourist, the flaneur and the worker. With works by Joseph Beuys, James Lee Byars, Sarah Charlesworth, Erwin van Doorn and more. 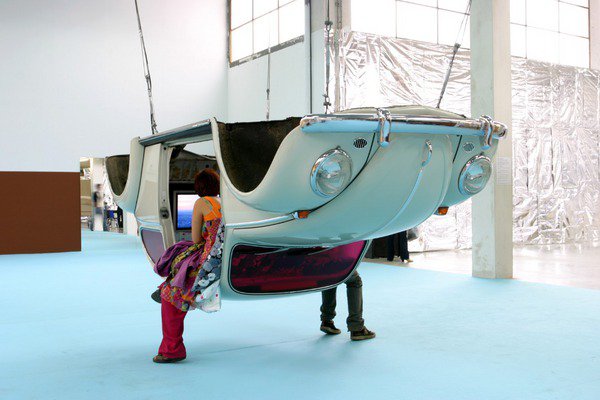 What role do you play?

On Saturday 26th February, Play Van Abbe Part 4: The Pilgrim, the Tourist, the Flaneur (and the Worker) will open in the Van Abbemuseum. The exhibition presents a selection of important works from the museum’s collection together with several special guest artists. In this last part of Play Van Abbe, visitors are invited to play a role whilst visiting the museum; the roles are the pilgrim, the tourist, the flaneur and the worker. The pilgrim is focused on the object of art; the tourist on stories; the flaneur on time and the overall museum experience. Finally, the workers are the roles that seek an active confrontation with art and produces new ideas for themselves and others. Visitors are invited to change roles during their visit and experience how artworks appear different according to the way how they are judged. By offering these classical roles, the museum seeks to focus directly on the visitors themselves and the way they experience art, rather than to thematise the artworks themselves.
The exhibition will be opened at 16.00 by Matthijs Rümke, artistic director Het Zuidelijk Toneel, and Charles Esche, director of the Van Abbemuseum. During the opening special guides will give tours of the new exhibition from their own perspective.
Play Van Abbe Part 4 runs until August 2011 and hosts a varied programme of performances, films and other events.

The roles
In the fourth part of Play Van Abbe, the museum focuses on the criteria that visitors often use to make judgements about art. These criteria have become more complex and uncertain over the last years and are certainly no longer limited to the old measures of beauty and truth. The title of the exhibition describes possible roles that a museum visitor can play when looking at an artwork or exhibition. Each of these roles experiences the museum in a different way and each will have their own ‘tools’ to explore the museum. Roles are never fixed and visitors can change them during their visit, or revisit rooms in a new character. Neither do they represent a hierarchy of experience and, in fact, each might be said to fill in the lack in the others.

On a spiritual journey, the pilgrim seeks revelation through contemplative observation. In contrast, the tourist takes a break from daily routines, and looks for the experiential and authentic. Wandering without a goal, the flaneur is open for everything while committed to nothing. The more active position of the worker can be approached from any role. The worker is the producer of new stories and meaning, and in this role, the visitor can leave behind feedback and commentary for those who come after.

The roles are not meant to clarify whether something is good or bad art, but open up new perspectives for a visitor on the artworks, the exhibition and the museum as a public place for experience and exchange.

In order to assist visitors on their journey, there will be a number of ‘game masters’ in the museum. They will guide each role and help with orientation and giving feedback.

The artworks
In the Oudbouw (old building) of the museum the symmetry of the architecture has been exploited to construct a three-dimensional mandala in which visitors are taken on a journey through a landscape of artworks about individual and collective social experience. Works are on show by Ulay / Abramović, Georg Baselitz, Joseph Beuys, James Lee Byars, Hamish Fulton, Douglas Gordon, Jenny Holzer, Anselm Kiefer, Richard Long, Oliver Ressler, and others.

On the ground floor of the Nieuwbouw (new building) the exhibition continues, following a parcours that resembles a stroll through an unknown city. Visitors in their various roles can stay on the street or take a look behind the facades to discover more intimate and private artworks. Works by Sarah Charlesworth, Robert Delauney, Erwin van Doorn & Inge Nabuurs, Barry Flanagan, Surasi Kusolwong, Katharina Sieverding, Andy Warhol and Yang Zhengzhong, amongst others.

On the second floor of the Nieuwbouw (new building), the exhibition Time Machines – Reloaded will also be on view during Play Van Abbe Part 4. Visitors will find four presentations based on special museum models from the past. Like with Part 3, there will be some changes in this exhibition during Part 4, in co-operation with guest curators and artists. Amongst other things, in April an important work by Marko Peljhan will be added.

The Van Abbemuseum in Eindhoven is one of the first public museums for contemporary art to be established in Europe. The museum’s collection of around 2700 works of art includes key works and archives by Lissitzky, Picasso, Kokoschka, Chagall, Beuys, McCarthy, Daniëls and Körmeling. The museum has an experimental approach towards art’s role in society. Openness, hospitality and knowledge exchange are important. We challenge ourselves and our visitors to think about art and its place in the world, covering a range of subjects, including the role of the collection as a cultural 'memory' and the museum as a public site. International collaboration and exchange have made the Van Abbemuseum a place for creative cross-fertilisation and a source of surprise, inspiration and imagination for its visitors and participants.

Closing symposium
The 18 months programme Play Van Abbe will be concluded by a symposium in July.