The show of Anna Ostoya will feature a series of new collages on canvas entitled 'Exposures' that were all made during February 2011. For this series, Ostoya staged a durational performance. Contemporary in the Gallery II is on view an exhibition of Tom Burr: Black Lab. Through his sparse presentation and refined media, Burr's arrangement compels with almost fetishistic elegance; its domestic size and 'naughty' details create an evocative subtext to the austerity of his composition. 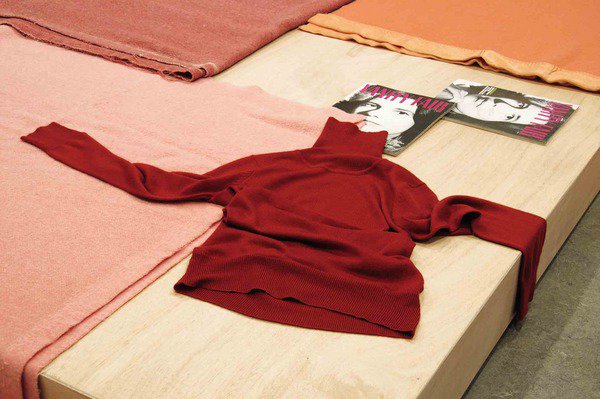 Bortolami Gallery is pleased to present the first New York solo exhibition of works by the Polish artist Anna Ostoya. The show will feature a series of new collages on canvas entitled Exposures that were all made during February 2011. For this series, Ostoya staged a durational performance. Each day, she began a new work with the aim of finishing 28 canvases-as many as there are days in February-by the time of the opening on March 1st.

Conceived in response to the Bortolami Gallery’s invitation, Exposures depends on pre-determined limits. They were realized not only through the temporal restrictions of her daily regimen, but also through the physical restrictions of the 20 x 24-inch canvases on which she worked. Other materials included newspaper and internet images, papier-mâché, gold leaf, and acrylic paint. Moving between her kitchen and studio, Ostoya made papier-mâché from unused papers creating compositions that operated somewhere between meticulous planning and improvisation. The scheduled time-too little for either lengthy reflection or extensive revision-became a test of her artistic efficiency and an experiment in creative manufacture. Performing like an udarnik (a super productive worker in Communist states), she attempted, in paradoxical fashion, to recapture enthusiasm and genuine spontaneity through disciplinary constraint. Exploring the tension between representation and abstraction, each canvas is marked by the day’s events and shaped by Ostoya’s creative responses. Through the combination of cheap paper and gold foil, she opened the work to questions about economic and ethical values, and through her accelerated timetable, she aligned her practice with industrial modes of cultural production.

Ostoya’s multi-media practice includes collage, painting, sculpture, and sound. Conceptually grounded, her work cuts through different art historical traditions and styles in order to elide prevailing fashion that endangers the critical and reflective potential of art. Rejecting the commonplace opposition of aestheticism and anti-art, Ostoya offers aesthetic objects that repeatedly direct the viewer towards the historical and institutional contexts of the work. Previous projects by the artist dealt with the subjects of violence and war, avant-garde histories, and the contemporary information glut.

Anna Ostoya was born in Krakow in 1978. In 2009, she graduated from the Whitney Independent Study Program in New York. Ostoya’s work has been exhibited at Tegenboschvanvreden in Amsterdam (2011); Galeria Foksal in Warsaw (2010); Center for Contemporary Art Kronika in Bytom (2010); the Center for Curatorial Studies, Bard College, Annandale-on-Hudson (2010); Lisson Gallery, London (2009); and Car Projects in Bologna (2009). She participated in Manifesta 7, Rovereto and the 2nd Athens Biennial. Upcoming exhibitions include a solo show at Silberkuppe in Berlin and a group show, Rearview Mirror, at The Power Plant in Toronto. She lives and works in New York.

Tom Burr‘s work may currently be seen at the FRAC Champagne-Ardenne in France. Recently, he has exhibited works in a two-person show (with Monica Bonvicini) at the Museum für Gegenwartskunst, Basel; as a part of ‘Rachel Harrison: Consider the Lobster and other Stories’ at the Hessl Museum at Bard College; in ‘The World is Yours’, curated by Anders Kold at the Louisiana Museum in Denmark; ‘Moby Dick’, curated by Jens Hoffman,at the CCA Wattis Institute for Contemporary Arts, San Francisco and in the exhibition ‘Saints and Sinners,’ curated by Laura Hoptman, at the Rose Art Museum, Brandeis University. He has held solo exhibitions at The Sculpture Center in New York, Vienna Secession, and Museé Cantonal des Beaux-Arts de Lausanne. Burr lives and works in Norfolk, CT and New York.