From This Moment On. The artist worked with the immediate medium of Polaroid, while also experimenting with the photographic process, creating layered and hand-painted prints, photograms and cyanotypes. His resulting works are searing and frank portrayals of the display of selfhood, sexuality, illness and death. 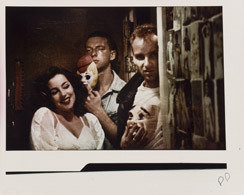 Mark Morrisroe: From This Moment On will be the first comprehensive exhibition in the United States of works by artist Mark Morrisroe (1959 – 1989), providing an insight into the radical and innovative output of his short career.

Mark Morrisroe’s work was intrinsically tied to his elaborate personae and his sexual and social re­lationships. He grew up in Boston where he worked as teenager hustler and where he later went to art school, before moving to New York City in the mid 1980s.

Morrisroe’s subjects were his friends, lovers, and his everyday surroundings. The imagery of his photographs and 8mm films combines the diaristic with the melodramatic, presenting the post-punk scenes in Boston and New York through a lens of vivid and romantic degradation and decay. He worked with the immediate medium of Polaroid, while also experimenting with the photographic process, creating layered and hand-painted prints, photograms and cyanotypes. His resulting works are searing and frank portrayals of the display of selfhood, sexuality, illness and death.

While his photographs often appear offhand, and depict intimate and at times deviant moments, they also present individuals, couples, and groups as aspirational, posturing starlets, adopting the faded hues of 1950s Hollywood publicity shots and the classical nude compositions of Man Ray. Drawing from drag, cabaret, club and drug scenes, the performativity of his subjects was paramount:

The theoretical significance of Morrisroe’s efforts to ‘write a new life’ lies in his recognition that the compulsive and repeated effort to invent and re-invent oneself is fundamentally a form of ‘lying’ – or fictionalization – and that ‘truth’ is made up of a succession of lies. As an artist, Morrisroe located this performance of self at the heart of the photographic process. His complex manipulations of the photo negative – a preoccupation which persisted and developed throughout his career – allowed him a means of transposing truth into lies, and lies into truth, or, of ‘writing a new photograph.’

The horrors of AIDS – itself like some disease from science fiction – would have compounded the sense of a society in extremis… this urban landscape would be a venue throughout the early 1980s for a remarkable flowering of loosely networked individuals – fed on the traditional sub-cultural diet of drugs, flamboyance, sex, boredom, and intense emotional drama. As such, the early milieu out of which ‘the secret public’ developed their artistic vision can now be regarded as the historical (and historic) witness to the end of an age – the late twentieth century equivalent, perhaps, to the ‘Weimardämmerung’ observed by Stephen Spender in German society and youth culture during the late 1920s.

M. Bracewell, ‘An Evening of Fun in the Metropolis of Your Dreams’, 2008

Mark Morrisroe was born in Malden, Massachusetts in 1959, and died in Jersey City, New Jersey in 1989. He attended the School of the Museum of Fine Arts in Boston from 1977 to 1981. His work was exhibited by Pat Hearn Gallery from 1985 onwards, including solo exhibitions in 1986 and 1988. His work was also included in two group shows at Artists Space: Split Vision, 1985 (curated by Robert Mapplethorpe and Laurie Simmons); and Witnesses: Against Our Vanishing, 1989 (curated by Nan Goldin). After his death, his work was at the center of the survey exhibition Boston School, ICA Boston, 1995 (curated by Lia Gangitano); solo exhibitions of his work have included Mark Morrisroe, 1959-1989, Neue Gesellschaft fur Bildende Kunst, Berlin and My Life: Mark Morrisroe, Polaroids 1977-1989, MOCA, Los Angeles (both 1997).

Mark Morrisroe: From This Moment On is made possible through the generous support of
The New York State Council on the Arts, a State Agency, public funds from the New York City Department of Cultural Affairs, in partnership with the City Council, The Friends of Artists Space, the Estate of Mark Morrisroe (Ringier Collection), and The Robert Mapplethorpe Foundation.