The Pleasure of Play. The exhibition presents 180 drawings, 1930s childhood paper dolls, the full set of 1940s gouaches along with triptychs, individual drawings, storyboards and over 300 reference pages. 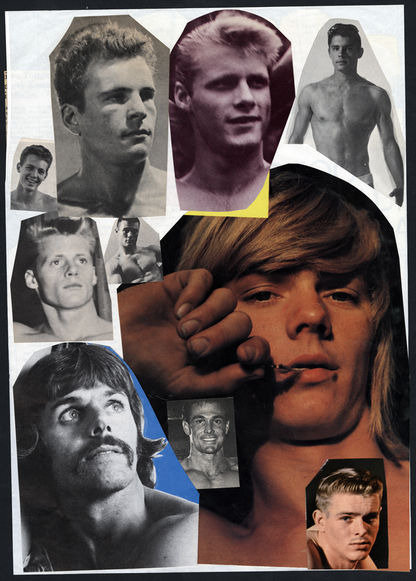 The Pleasure of Play is the most comprehensive Tom of Finland survey exhibition to date, spanning six decades to include more than 180 drawings, 1930s childhood paper dolls, the full set of 1940s gouaches along with triptychs, individual drawings, storyboards and over 300 reference pages.

Touko Laaksonen, aka Tom of Finland (1920, Kaarina – 1991, Helsinki), was a child of grammar school teachers and grew up in rural Finland. At the age of 19 he enrolled in a distance learning advertising course. Soon drafted, he joined the Finnish Army in its fight against the Soviet invasion. After the war he stayed in Helsinki, studying classical piano at the renowned Sibelius Academy. While at the Academy, Tom of Finland worked as freelance graphic designer, later becoming senior art director at the Helsinki office of the global advertising agency McCann Erickson.

While living life as an adman in Helsinki, his global career as an iconic gay figure was jumpstarted in 1950s Los Angeles, through his ongoing contributions to Bob Mizer’s publication Physique Pictorial. From the 1960s onwards, he frequently published his now well-known comic series with the Danish publishing house DFT, COQ International and the Swedish Revolt Press, and later through his own Tom of Finland Company.

During his 17 years at McCann, a job he quit in 1973, Tom of Finland started traveling extensively throughout Europe. On his many trips, particularly to London, Hamburg and Berlin, he would take his drawings to sell or to gift to men that he met in the local gay scene, thus proliferating his work while establishing an underground distribution network, and with it a network of friends and admirers. From the 1970s onwards Tom of Finland began to visit the US more frequently. While he never permanently resided in the states, during the last decade of his life he spent equal time between Helsinki and Los Angeles.

Tom of Finland’s biography parallels pivotal moments of 20th century (gay) history, bearing witness to the disasters, the turmoil and the radical changes that took place during his lifetime. Indeed, his work stands in dialectical relationship to these events and the often oppressive culture that surrounded him.

Starting from an early age, Tom of Finland played with the iconographic conventions upon which both the representation and the very conception of masculinity are based. His emblematic, larger-than-life drawn phalluses threaten not only the existing symbolic order of heterosexuality, but also reorganize the principles by which (homo)sexual desires are structured. This fearless portrait of sexuality can also be read as a portrait of the sadomasochistic relationship that is at play between culture and subculture itself, an aspect that runs through gay culture of the 20th and 21st centuries as much as it is present in Tom of Finland’s biography and work.

Working from 1956 to 1973 as senior art director at one of the first global advertising agencies, it is likely that Tom of Finland had access to a range of global mainstream publications as well as illegally published early gay magazines – both from which he would meticulously cut out details and compose on single pages to later use as studies, or as he called them, reference pages.

It is telling that many of these cutouts are taken from global print campaigns; Tom of Finland seemingly studying and taking apart the representations of maleness and gender-assigned attributes in mainstream media, and fusing them with cutouts from gay periodicals. Originally separated into binders, the majority of these collages were sorted by distinct taxonomies: leather jackets, motorcycles, uniforms, beards, hairdos and so forth. On rare occasions he also drew directly onto these cutouts,to either amplify or reduce the existing attributes.

In some respects the collages are key to an understanding of Tom of Finland’s work. During the day (at least until 1973), as an acclaimed advertising executive Tom of Finland was involved hands-on in creating the hetero-normative vision of the happy suburban family of the late 1950s; while at night, he would cut up the very basis of his own work (print advertising) to study, to analyze and to categorize – turning these reference pages towards the exact opposite of their origin. One aspect of Tom of Finland’s drawings is that the faces of his protagonists feature a familiar, recognizable likeness – these bold, grinning faces, while in the act of sadomasochistic play, present a fearless vision of sexuality pointing towards the culture that constructed the relationship between sexuality and fear in the first place.

Because of Tom of Finland’s compound status as artist and sub-culture icon, his work has for years been admired by many artists including the late Mike Kelley, who in 1988 invited him to speak at CalArts (documentation of which is on view at Artists Space Books & Talks); Raymond Pettibon, who became a lifetime supporter of the Tom of Finland Foundation; as well as Richard Hawkins, who continues to work with the Foundation today.