A show of works which are inspired and influenced by water and the ocean. These paintings reflect as well the meditative tranquility of water as the powerful elements of nature. Exhibited are recent works by Madeline Garrett, Francoise Issaly, Michael Kessler, Ana Marini, Jack N. Mohr, Taraneh Mozafarian and Julia Pinkham. 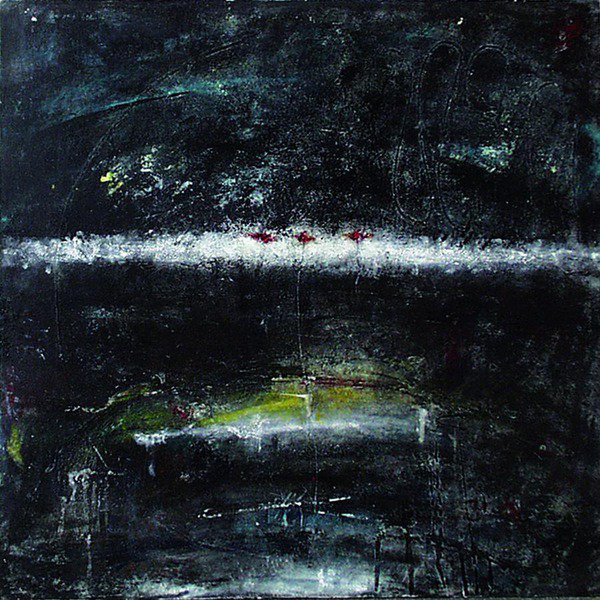 “Waterworld” is a show of works which are inspired and influenced by water and the ocean. These paintings reflect as well the meditative tranquility of water as the powerful elements of nature. Exhibited are recent works by Madeline Garrett, Françoise Issaly, Michael Kessler, Ana Marini, Jack N. Mohr, Taraneh Mozafarian and Julia Pinkham.

MADELINE GARRETT came from the Philadelphia area to Santa Barbara in 1993. Her work has developed from impressionistic florals and landscapes to collage and mixed media utilizing encaustics, oil, or acrylic, working on paper, canvas and wood. Her abstract paintings are ventures into the unknown, finding beauty in the mystery and the undefined. She has a passion for the painting process which she sees as a delicate balance of skill and intuition, a fluctuation of control and letting go, allowing for surprises. Drawing upon a multitude of life experiences, she pours herself into her paintings.

FRANÇOISE ISSALY, a Franco-Canadian artist, finds the shapes and forms in her work in nature. Using the traditional technique of glazing all different spaces are apparent to the eye without contradicting each other, which allows her to play with infinite layers, exploring the illusion of the bi-dimensionality of the canvas, playing on intermediary spaces, balancing foregrounds and backgrounds. Her compositions are not simply made on the surface of the canvas but in depth, step-by-step, plane-by-plane, and layer-by-layer.

MICHAEL KESSLER lives and works in Santa Fe, New Mexico. He won several prestigious awards and fellowships, among these the Rome Prize, Painting, American Academy in Rome, 1990; the Pollock/Krasner Award, Painting, New York, New York, 1992; and the Whitney Independent Study Program, Whitney Museum of American Art, New York, New York, 1977. His work can be found in over two dozen museums nationwide, including the Santa Barbara Museum of Art, and in a seemingly endless number of corporate and private collections. Kessler’s handling of surface texture is strikingly accomplished. The range of his visual effects is wide indeed, from long languidly curving drip forms and pooling blobs, to squeegeed foliate forms delicate as branch corals, to complex swirls of compelling visual depth. With his multiple layering of visual events, often setting geometric structures against organic forms, he states his devotion to nature as his muse.

ANA MARINI, born in Buenos Aires, Argentina, resides in Los Angelea. She studied art in Buenos Aires and also in Los Angeles, California. About her work she says: “My art is about people and the way they experience their lives. I intend for my artwork to reflect emotions and thoughts. While creating sculptures and paintings, I try to suggest a story, not only of the moment but also of an entire life. Not only of what we can see, but what is invisible to the eyes. Art is always a mirror. That is why it is so powerful. It speaks not only about my subject, but also speaks about my perceptions. I go deep inside myself searching for answers about human relations in this fast and ever changing world."

JACK N MOHR, a native of Berlin, Germany, studied visual communication at the State University for Creative Arts in Berlin. 1997 he moved to Santa Barbara, California. He works in different mediums — collage, painting, sculpture, print, and ceramics. In his abstract art he explores how light and shadow, forms and structures or colors interrelate but has changed into a more expressionistic style recently.

TARANEH MOZAFARIAN, descending from a rich Persian cultural heritage, in addition to a family of artists and jewelers, views her art as gems. Using different techniques and approaches Taraneh’s work is continuously evolving. She makes wall pieces and installations using copper and other unconventional material. Working with copper mixed media Taraneh finds her medium unpredictable and full of surprises. She feels the copper is alive and has its own intelligence. She allows the piece to guide her, however the final image reflects the materials’ innate qualities, as well as the artist’s thoughts and feelings. Her unique artistic vision combines traditional Eastern soul with the Western mystery of abstraction.

JULIA PINKHAM has been working full time as an artist since 1979. In addition to fine art, her artistic career has included a wide range of creative endeavors including twelve years in business creating a line of clothing of her own handpainted fabric designs, designing a line of best selling prints for a textile company in New York and creating cloisonee jewelry designs for Zarah Company of California. She has written and illustrated a series of Nature Encyclopedia coloring books for Stemmer House Publishers and her watercolor paintings of endangered species were published as a line of greeting cards and T-shirts that were sold worldwide. Julia’s artwork has been strongly influenced by the natural world and the ocean in particular. Her current abstract surrealist works in mixed media and acrylic on canvas reflect her ongoing interest in natural forms. Her work expresses a spontaneous sense of freedom, energy and movement.