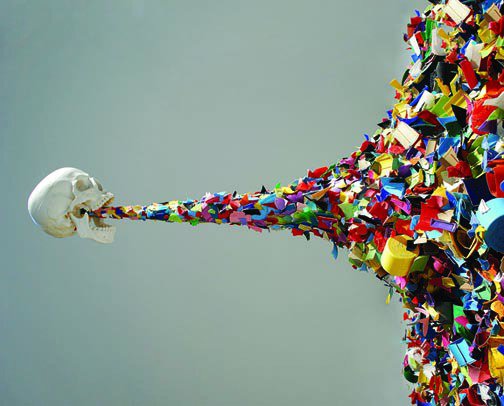 Building on Miami’s overwhelming success, SCOPE launches its 2011 season with its flagship fair, SCOPE New York. Serviced daily by shuttles, this year SCOPE expands to a 60,000 square foot hall on the West Side Highway, minutes from The Armory Show. The fair opens to Press and VIP’s on Wednesday, March 2 with the FirstView benefit. This year’s New York edition of the fair, March 2–March 6, 2011, will present over 50 international galleries from four continents and sixteen countries including China, Mexico, Japan, Korea, Brazil, Italy, France, Belgium, the Netherlands, Norway, Switzerland, Germany, UK, Spain, and Canada. SCOPE New York’s invitees will uphold its unique tradition of solo and thematic group shows providing the real opportunity for gallerists, collectors, curators, artists, critics and art sco lovers alike to experience a view of the contemporary art market available nowhere else.

THE CENTER carved by SCOPE is an artist driven 501(c)(3) launched in 2007 to fund and promote contemporary art in and out of the marketplace. Utilizing the dynamic force of trade and the principles of a gift economy, THE CENTER creates the opportunity for everyone to be a philanthropist. We are dedicated to supporting the international artist community, as well as other not-for-profit institutions where community development and social awareness are primary directives.
http://www.thisisthecenter.org

GUMBOOT DANCE
Gumboot dancing was born in the gold mines of South Africa at the height of the migrant labor system and during the oppressive Apartheid Pass Laws. The gumboot dance (or Welly Boot dance) is performed by dancers wearing Wellington boots. Sometimes the boots had bells added, to ring as the dancers stamp on the ground. This dance was often used as a code or system of calling to say something to another person a distance away. It acted in place of language among those working in the mining grounds. This dance can still be seen today on the streets and plazas in tourist areas of South Africa. It is a dance made by idiophones (a musical instrument which creates sound primarily by way of the instrument's vibrating, without the use of strings or membranes) or autophones (objects of the everyday life vibrating by themselves), and is similar in execution and style to forms of "Stepping" done by African-American fraternities and sororities. The West Harlem Art Fund reached out to creative professionals and retailers from around the City that were willing to help us spotlight a New Harlem that is more contemporary, hip and transcending. Interested parties can register on Ticketweb. Search for Live Art at the Mink Building.
http://www.myharlem.net

REBAROQUE
Rebaroque was created from fine artists Mikal Jessie Hameed (aka M11X) and Rebecca Paul’s love for art, history, sustainable design and music. Using all recycled and sustainable materials such as vintage frames and fabrics with hand detailing, the pair have created a line of design meets art meets functional sound panels. Each sound panel functions as a piece of art that hooks into your iPod or smart device. Rebaroque asks us to use our favorite music to interact within the spaces we live or work in, and then redefine how we all think about music and our homes. The Rebaroque Artist Series takes our product a step closer to fine art. We’ve asked a slew of contemporary artists (such as Dennis McNett, Doze Green, Beau Stanton, Kid Zoom, Tara McPherson, Jon Burgerman) to put their touches on a Rebaroque sound frame. Each piece is completely unique and hand detailed. Some artists may customize one piece, some may do five, there will be no editions, just one of a kind pieces. Our Artist Series meshes our vision with artists we love.
http://rebaroque.com

COME ON GUY
Come On Guy is a party within a party. A centrally placed cube will contain an actual, traditional frat party where the brothers will drink from a keg and party “greek style”. Outside the enclosure, the usual opening party will be taking place replete with evening attire, champagne and art world conversation. Party goers will be able to interact with the frat party via text, purchasing items of clothing, accessories, and receiving messages and files created by the brothers.
http://vimeo.com/richiebudd
https://www.subports.com

FLOOR OBSESSION
Katya Hott and Eddie Yoo, members of Floor Obsession breakdance crew, are hosting an invitational dance battle at SCOPE. The battle will highlight eight of the finest bboy talent in New York, pitting them against each other in a one versus one, tournament-style competition. In battles like this members of the same community put aside their friendships to test each other’s skills and determine the top contender.
http://www.floorobsession.com

CRAIG SMITH | STACKING BOATS: A LESSON
Smith’s performance and imagery, entitled: “Stacking Boats: A Lesson Plan” will be webcast between London and New York. Smith will appear as a “talking head” that addresses issues such as self-training and development in the human, athletic body/ the American poet Walt Whitman’s altruistic leadership and therapeutic interventions with wounded soldiers during the American civil war/ a proposed ‘intensive- extensive’ binary between the speaking voice and the first-person narrator (intensive)/ and the spectrum of belief in visual and auditory cultures evaluating fact or truth in relation to the visual model of documented events (works on paper, photographs, oral traditions performed).
http://fatalfieldgoal.blogspot.com

Home Away From Home sells objects, services, and pleasantries that often go missing while away from comforts of home during art fairs. The booth is designed to look like a local corner store and is reminiscent of a home with cozy wallpapered walls created by artist Jennifer Zackin, knit objects for home designed by Karelle Levy, and Listings Project Special Edition art objects by Sanford Biggers.

At Home Away from Home there are yoga classes, meditation classes, a TV to watch, Listings Projects testimonials to read , free wifi, a courtesy computer and a charging station. For sale are: Advil, breath freshener, Dancing Deer brownies and cookies, KIND bars, Vita Coco coconut water, sharpies, tampons, key chains from Global Goods Partners, make your own business cards and more! Visitors are welcome to shop, rest, recharge, or just hang out. http://www.stephaniediamond.com