'Standard Deviations: Types and Families in Contemporary Design' showcases objects and designs in the Museum's collection that belong to families, including an important recent acquisition of 23 digital typefaces, on view here for the first time. 'Looking at Music 3.0' explores the influence of music on contemporary art practices, focusing on New York in the 1980s and 1990s and the birth of 'remix culture'. 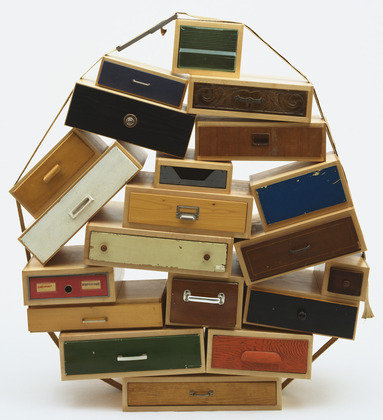 Since the late 19th century and throughout much of the 20th, designers have celebrated the socially uplifting promise of industrial production, believing the true path to modernity lay in standardization. A designer’s job was to conceive a model that could be converted into a working prototype—a blueprint for a series of objects, each identical and manufactured according to exacting rules. Yet it is human nature to crave individuality, and since the 1980s designers have sought to inject “chromosomes” of unique identity into objects produced on an industrial scale.

Digital technology has made the dream of creating families of objects with common traits and distinct behaviors a reality; today, the model is the working prototype is the series. Standard Deviations showcases objects and designs in the Museum’s collection that belong to “families,” including an important recent acquisition of 23 digital typefaces, on view here for the first time. All digital or designed with a foresight of the scope of the digital revolution, these typefaces significantly respond to the technological and cultural advancements occurring at the end of the 20th century and in the opening years of the 21st. Each one of them is a milestone in the history of digital typography.

The exhibition is organized by Paola Antonelli, Senior Curator, and Kate Carmody, Curatorial Assistant, Department of Architecture and Design, The Museum of Modern Art.

This series explores the influence of music on contemporary art practices, focusing on New York in the 1980s and 1990s and the birth of ''remix culture''. These films and videos examine the birth of hip-hop; new articulations of feminism in video chain letters, zines, and raucous art and music performances; AIDS activism in public service announcements, street posters, and concerts; the continued artistic development of music videos; and the rise of the digital domain, where sound and image acquired a curious parity as sampled bits of electronic information, raising the curtain on new creative possibilities. Organized by Barbara London, Associate Curator, Department of Media and Performance Art.