A Chain of Events, is an installation by the artist specifically made for the Capella MACBA. Made in two parts - Retaule laic (Secular Altarpiece, 2010-11) and Peca escrita (Written Piece, 2010-11) the intervention brings together and distils the intellectual, formal and aesthetic influences at the core of this artist's way of working and thinking. The origin of the work stems from a process of exhaustive revision of the last decade of Duran's artistic production, the innumerable images that have fascinated him, from the Russian avant-garde to the metamorphic Latin-American modernities. 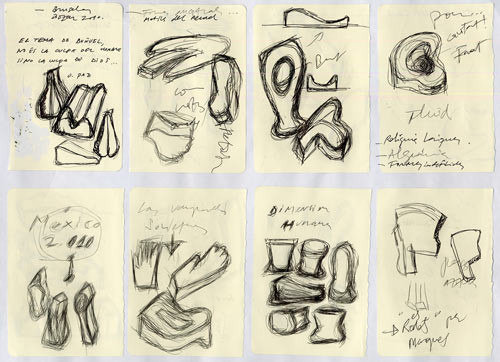 A Chain of Events, an installation by the artist Pep Duran (Vilanova i la Geltrú, 1955) specifically made for the Capella MACBA, should be seen as a work-essay. Made in two parts – Retaule laic (Secular Altarpiece, 2010–11) and Peça escrita (Written Piece, 2010–11) – the intervention brings together and distils the intellectual, formal and aesthetic influences at the core of this artist’s way of working and thinking.

The origin of the work stems from a process of exhaustive revision of the last decade of Duran’s artistic production, the innumerable images that have fascinated him, from the Russian avant-garde, experimental theatre or the Bauhaus, to the metamorphic Latin-American modernities. Thousands of references and hundreds of texts configure a personal archive that grows and evolves through the constant accumulation of sources. This has led the artist to dig deep into the relation that exists between form, seen as a perennial archetype pointing to a time that coincides with the present yet goes beyond it, and life, understood as a desire to leave a mark on the eternity of form with the actual experience of the moment. The coexistence of anachronism and contemporaneity is a violent one, as Duran demonstrates with these objects, since they are the product of a reflection on how things and subjects are anchored in time, and on how time is not only interpreted by us, but also interprets us. By combining a faithful revision of many of his own works with an exhaustive analysis of the decisions that determine his use of materials, the relation of objects and subjects to space, and the interplay between actor and spectator, this study has become a foundational document, a blank page from which to start afresh, from the beginning.

Retaule laic, a large piece presiding over the central space, where the altar of the old chapel would have been, is composed of seventy ceramic modules made in close collaboration with Toni Cumella, an expert on ceramics. Cumella and Duran have created a white wall where the repetition of identical and similar elements plays a fundamental role. Difference and identity of forms, reliefs that appear on the white ceramic surface as if trying to pierce it. This large sculptural wall is an alphabet. It names time. In what was once a sacred space, a place created by our culture to allude to that which is not subject to the laws of time and nature, this secular altar reminds us of the difference between those things that repeat themselves and those that never return; of how difference and identity mark not only the Western view of historical time, but also of its protagonists. If the difference between that which ceases – life – and that which prevails – the work, deity – was abolished, our understanding of time would be radically altered. Through a personal inventory of forms and materials, Duran offers an incisive study of the dual powers of language in contemporary art. In works such as Retaule laic we understand the tension between the eternal and the ephemeral, and how each one of us, although respecting and accepting the order of chronology, struggles to be free of its logic.

This wall may also be seen as a great labyrinth: a labyrinth that can be apprehended in one instant, at first sight. The writer Jorge Luis Borges said that the worst labyrinth is not that intricate form that can entrap us forever, but a single and precise straight line. A straight line allows us to see things at a glance, beginning and end, without mystery. But the immediacy of a single glance can be the cruellest of punishments. With this in mind, we should reflect on this image, on the importance of art and thought for the creation of complex images, for opening up a space where other alternatives can be found, beyond the horizon of the inevitable. This work leads us in that direction: the most physical, present, simple and graspable of things must also be the most remote, the most capable of opening up to the ‘revelation’ of other aesthetic and conceptual languages that might help us make sense of the confusion in which we find ourselves. The work is like a mirror, strangely magical: it forces us to step back, and yet, as we approach it, it becomes increasingly physical and dense.

The second element in the installation is Peça escrita. Made with the same material, ceramic, and with the help of the same maestro, Toni Cumella, nevertheless there are enormous differences between this and the piece that presides over the altar: the texture, the colour and the appearance of a text refer to a different world within the same universe. The text is a fragment of a poem by Fernando Ferrer Lerín. Everything in that second piece refers to the notions of fraction, part, fragment. It might be the remains of a catastrophe of memories, vestiges that force us to use ellipsis, i.e., to stop and leave things incomplete. In contrast to the marked identity of the altarpiece, this one seems to be shrouded in secrets. The texture of the wall suggests the vegetation that covers and perhaps hides a significant construction from a past civilisation. Without revealing it completely, the phrases merely hint at the longer text of which they are a part. The idea that there is a ‘key’ to everything is another fundamental concept in our cultural understanding. From the missing link to the most recent vaccine, everything evolves round the idea that there is a solution; all we have to do is find it. The key does not always deliver its promises or rather it pushes them even further into an uncertain future, while leaving the present in a state of constant interrogation that affects every layer of language.

The present social and economic situation is the best example for understanding this logic. In fact, it seems odd that a text or a work should have so much power to ‘explain’ what is happening, how far we can see, as well as the mental space that supports it, plus the space that the text, or explanation, creates for itself: hence the renewed interest shown by artists in this false archaeology. They are not interested in a better past, or in a catastrophic vision that sees civilisation ending as it began. They are interested in the risks that have to be taken in order to understand the present, and in the laws and models that could open up new scenarios for reality, other than those already imagined, through forms that can relate the numerous disciplines that affect man. Art is undoubtedly one of them, if not the most fundamental.