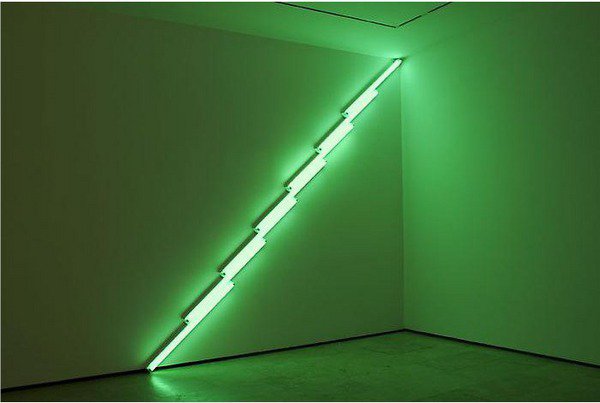 Grounded in the idea of a parallax, defined as “the apparent displacement of an observed object due to a change in the position of the observer,” this exhibition brings together stylistically disparate artists linked by the tension and romance between rigorous geometry and expressive chaos.

The Parallax View explores the idea of observation as conflict: conflict between mind and object; analysis and fleeting insight; continuity and fragmentation; object and artifact; inner and outer.

The minimalist works by Dan Flavin and Robert Irwin provide narratives about light and landscape. Agnes Martin and Mary Heilmann suggest both the vastness and intimacy of nature, yet another source of conflict, but free of nostalgia or sentimentality. Bruce Nauman, Robert Morris and Teresita Fernández define perception, the physical and temporal relationships that a viewer encounters in relation to an artwork, setting the stage for interpreting a parallax as a prism that reflects the many facets of observation as conflict. Eva Hesse and Gego take a playfully minimalist approach to liberate sculpture from its traditional restraints, and straddle the line between figuration and abstraction.
Taken as a whole, the exhibition is a complex spatial proposition on the relationship between seeing and experience, an abridged history within the shifting paradigms that ushered art towards the present century.

In Memento, Otero presents a new body of work highlighting the process-based art for which he is known. Through his innovative process of oil paint scraping, Otero venerates historical oil painting while confronting it head on. Materials such as canvas, desks, dining tables, and frames are treated as sculptural, three-dimensional surfaces utilizing two-dimensional techniques. After painting realistic imagery onto glass, Otero delicately peels off sheets of oil paint and grafts the layers to his object. With his creations Otero says he wishes to “give a sense of abundance, unbalance, ambition, courage, and persistence within form, color and texture in every painting.”

Philosophical texts, theories of representation, and notions of abstraction inform Otero’s process, but his most central inspiration is personal. Otero’s work is heavily influence by life in Puerto Rico, his relationship with family members, and his personal narrative. Instead of representing his life through art, he archives moments within it by creating opportunities of surprise and self-discovery.

Angel Otero was born in 1981 in San Juan, Puerto Rico, where he resided until moving to Chicago at the age of 24. He is currently based in Brooklyn but divides his time between New York and Chicago. He received his Master’s of Fine Arts from the School of the Art Institute of Chicago. Shortly after receiving his MFA, Otero was included in the exhibition Constellations at the Museum of Contemporary Art, Chicago and was the recipient of the prestigious Leonore Annenberg Fellowship in the Visual Arts. Otero’s recent solo shows include exhibitions at Kavi Gupta Gallery, Chicago and the Chicago Cultural Center. In 2010 Otero’s work was included in a group show at Lehmann Maupin entitled Touched and a group show at LA’s Prism, entitled Misericordia.