Logic of the Birds

Within a specially-created environment animating the gothic interior of Islington's Union Chapel, the remarkable live presence of Sussan Deyhim leads a silent chorus of men and women - moving deftly between media - in a delicate alchemy of image, action, sound and space. 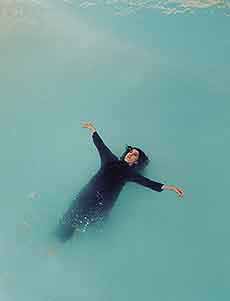 Logic of the Birds

A mass of people move silently through woodland. It isn't clear where they have come from nor where they are going: only that they are on a journey.

High above a quarry, the crowd watch and wait as a solitary woman sinks into water. Is she the mythical Simorgh - part-bird, part-goddess - from whose eggs the world was made? Is it she who they are searching for?

A mesmerising synthesis of live performance and multiple projection intercut seamlessly from stage to screen, Logic of the Birds is inspired by Persian poet and mystic Farid al-Din 'Attar's 12th century masterpiece The Conference of The Birds. An epic affirmation that true enlightenment comes from within, 'Attar tells the story of a flock of birds on a quest for meaning: a journey of hardship undertaken across seven dangerous valleys in search of their leader, the Simorgh.

This ancient Persian text simply serves as the point of departure for a group of contemporary Iranian artists all now living in New York. The group has worked on several occasions with Shirin Neshat in the creation of the cinematic installations that have given her such a dedicated international following, but here they come together in a different way allowing their diverse skills to meet afresh as equals.

Within a specially-created environment animating the gothic interior of Islington's Union Chapel, the remarkable live presence of Sussan Deyhim leads a silent chorus of men and women - moving deftly between media - in a delicate alchemy of image, action, sound and space.

They ask (but silently; they make no sound)
The meaning of these mysteries that confound
Their puzzled ignorance. How is it true
That 'we' is not distinguished from 'you'
Farid al-Din 'Attar, The Conference of the Birds

Logic of the Birds is complemented by a series of seven events organized and produced by the Iran Heritage Foundation, in association with a number of other organizations. Concerts, conferences, an exhibition, lectures and poetry readings will be presented in London and beyond throughout November 2002. All these events deal with an aspect of the mystical traditions of the Iranian world. For details about the programme please see http://www.iranheritage.com

Bloomberg is a global multimedia news and information company, one that has made its mark by championing innovation and creativity both within the company and in the community as a whole.

Logic of the Birds is commissioned by Artangel, Change Performing Arts, The Kitchen, RLG Productions and Walker Art Center

The Union Chapel presentation is produced by Artangel in association with Iran Heritage Foundation and Bloomberg. Further support has been provided by London Arts, Arts Council of England (Connecting Flights) and The Company of Angels with the special help of Dasha Shenkman and Alireza Ittihadieh

Time Out is the media sponsor for Artangel's 2002 autumn commissions

Connecting flights is devised, organised and supported by the Arts Council of England, British Council and London Arts and focuses on the way international cultural links can be expanded and strengthened by exploring the role of diasporas in re-defining national culture

The ground floor of the Union Chapel allows wheelchair access.

How to get there
The nearest Underground is Highbury and Islington on the Victoria Line. Bus Routes 4, 19, 30 and 43 all stop near the Union Chapel