The central work of 'Metropolis. Report from China' is Maya Schweizer and Clemens von Wedemeyer's film by the same title. Schweizer explores the dividing line between art and film, fact and fiction. While von Wedemeyer's video installations consistently center on the relationship between film and spectator and often integrate the context of a contemporary site with historical associations. The exhibition by Dierk Schmidt combines recent work and thematically related older pieces to create a focal image of contemporary economic-political relationships. 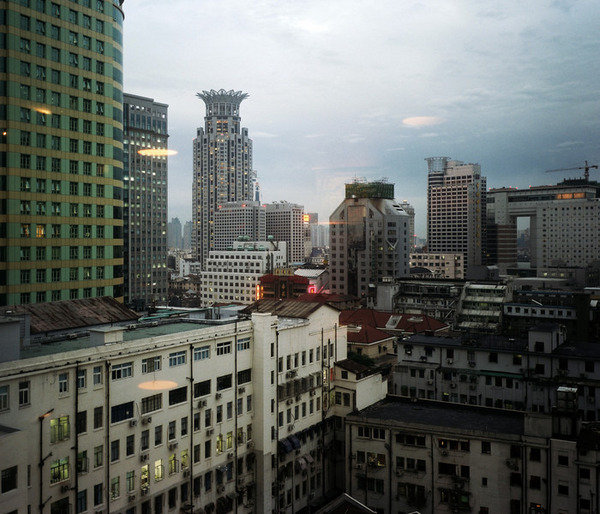 The central work of “Metropolis. Report from China” at the Frankfurter Kunstverein is Maya Schweizer and Clemens von Wedemeyer’s film by the same title. In her films, photographs, and installations often based on documentary material, the French artist Maya Schweizer explores the dividing line between art and film, fact and fiction. While her work addresses topics such as homelessness, cultural identity, and urban social structures, von Wedemeyer’s video installations consistently center on the relationship between film and spectator and often integrate the context of a contemporary site with historical associations.

Schweizer/von Wedemeyer traveled to China in 2004 to do research for the project of remaking Fritz Lang’s legendary film classic “Metropolis” (1927). To the artists, the two imposing mega-cities of Shanghai and Beijing seemed appropriate settings for this undertaking, given how these city landscapes reflect the gap between the living conditions of the workers and those of the new rich. As the result of their research, the documentary film “Metropolis. Report from China” (2004/6) presents the configurations of these cities in relation to “Metropolis” through discussions and interviews with the workers and architects responsible for the construction of the Chinese mega-cities. One the one hand, the film provides insight into the explosive growth of these modern Chinese urban centers, but, on the other, it questions the impact of the unrestrained drive for modernization, development, and progress.

In their film Schweizer/von Wedemeyer repeatedly refer to social-critical issues and the architectural settings of major historical events. “Metropolis. Report from China” is an artistic comparison between Lang’s utopia of the 1920s with the current communist system that verges on capitalist working conditions. The project investigates aspects of the utopian in constructed environments and thereby raises the question as to the current relevance and social reality of such urban utopias. For the exhibition at the Frankfurter Kunstverein, Schweizer/von Wedemeyer have reworked their project, expanding upon it to create a large, dense installation including photographs, slides, film historical materials, and placards recalling film posters. Also on view is Maya Schweizer’s work “NEWLAVILLE,” which through the use of large posters and slides draws on a 2002 advertising campaign promoting the radical modernization of old neighborhoods in Beijing.

Originally conceived for an outdoor public space, the work was initially intended to be show in the urban space of Berlin to promote a comparison in the modernization efforts of two major cities. The work represents Schweizer’s investigation of the idea that the notions surrounding the utopian city are generally similar or even universal.

Clemens von Wedemeyer (born 1974 in Göttingen) lives and works in Berlin. After studying photography and media in Bielefeld, he studied at the Academy of Visual Arts Leipzig (1998-2002). Von Wedemeyer has won numerous international prizes for his short films, video works, and installations, including the Böttcherstrasse Art Prize in Bremen (2005) and the VG Bildkunst Prize for Experimental Film and Video (2002). The artist has had solo exhibition at the Barbican Center, London (2009), Argos Centre for Art & Media, Brussels (2007), Kölnischer Kunstverein, and P.S.1 MoMA, New York (2006). He has taken part in international group exhibitions at venues such as the Kunsthalle Stuttgart and Deichtorhallen, Hamburg (2010), Kunst-Werke, Berlin, and MoMA, New York (2008). His biennial participations include the Sydney Biennale (2008), the fourth Berlin Biennale (2006), and the first Moscow Biennale (2005).

Maya Schweizer (born 1976 in Maison-Alfort, France) lives and works in Berlin. After studying at the Academy of Visual Arts Leipzig (2000-02), she studied fine arts at the Berlin University of the Arts. The artist and filmmaker has been awarded numerous prizes and fellowships, including the Toni and Albert Kumm Prize (2009), Villa Aurora, Artist Grant from the Goethe Institute Los Angeles, a commendation at the Short Film Festival Oberhausen (2006). In 2010 she exhibited at the Westfälische Kunstverein Münster, and she has taken part in numerous international group exhibitions, such as the Prague Triennale (2008), a show at the Centre Georges Pompidou, Paris (2007), and the sixth Berlin Biennale (2006).

The exhibition “Metropolis. Report from China” is taking place in conjunction with Thermostat, a cooperative project involving 24 French centres d’art and German Kunstvereine. It is an initiative of the association of French centres d’art, d.c.a and the Institut français. The project is also supported by the German Federal Cultural Foundation, the French Ministry of Culture and Culturesfrance, and the German Commissioner for French-German Cultural Cooperation.

The exhibition by Dierk Schmidt combines recent work and thematically related older pieces to create a focal image of contemporary economic- political relationships. A core question explored in Schmidt’s practice is how artistic images can address everyday political events and their historical legacy.

Schmidt explores the possibilities of critical painting in series of images. Above and beyond the simple depiction of historical events, he is interested in an expanded definition of historical painting, i.e. a constant tracking of historical references in the present. He does not consider his painting as the depiction or mere reflection of social constellations but as a medium that serves as a point of argument with the potential to reveal conflicting interests.

The starting point for many of Schmidt’s projects is the attentive observation of the economic conditions of artistic production before the backdrop of broader economic and political interrelationships. He focuses on the production of images and the accompanying image politics of governments, multinational companies, or media conglomerates, which he views as the successors to the past century’s forms of state representation. Schmidt analyzes these relationships by proposing a competitive situation— which does not exist in social reality—between economic-political and artistic representation.

One example is the 1998 work “Questionnaire to H. von Pierer,” in which Schmidt critically addressed polito-economic maneuvers of Siemens. The company assumed the role of sponsor and initiator of an exhibition intended as a liberal gesture, which would subsume “political painting” under the company’s cultural PR campaign. Formal concerns played a crucial role also in this project. Here the artist substituted functional materials such as transparent films for conventional, archival image carriers.

The new paintings produced for this exhibition in Frankfurt, an international financial center, activate references within the context of financial capital, image production, and the politics of resources. The new title work of the exhibition “IMAGE LEAKS – On the Image Politics of Resources” raises the questions if and how artistic image strategies can be used to counter the kind of image politics pursued by the multinational oil company BP after the disaster in the Gulf of Mexico.

The company attempted to control public perception of the extent of the contamination caused by the oil leak to such an extent that all campaigns against the situation were forced to use the same image resources. In his analysis Schmidt is sure that the comparative, analytical representations of various competing image campaigns—that of BP, the oil company’s opponents, and also the US government—ultimately impeded the “brand washing” of BP.

Dierk Schmidt was born in 1965 in Unna in Westphalia and currently lives and works in Berlin. After studying at the Düsseldorf Art Academy, he then studied 1996-97 at the Rijksakademie van beeldende kunsten in Amsterdam. The artist has had solo exhibitions at the Gesellschaft für aktuelle Kunst, Bremen (2004) and the Salzburger Kunstverein (2005). His work has been shown in group exhibitions at Witte de With, Rotterdam (2005), the Hamburger Kunstverein (2007), Kunsthaus Dresden (2009), the third Berlin Biennale (2003), documenta 12 (2007), the Trienal de Luanda (2007) and the first Brussels Biennial (2008), among others.

The exhibition is made possible by the Stiftung Kunstfonds.