The recent series of painting on wood, which will form the centre of this new solo exhibition, is not therefore without reference to the pioneer painter of geometric abstraction. The practice of color constitutes the central vector of this work. 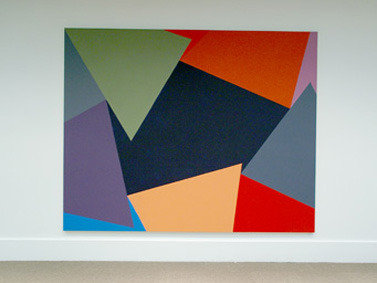 This new solo show dedicated to Bruno Rousselot at Semiose galerie from March 12th to April 30th, 2011, significantly renews arguments which show painting on a human scale, just as the work of Mary Heilmann shown at the New Museum in New York in 2009.

Across the pictorial slidings carried by John Armleder and Peter Halley, geometric abstraction since the eighties has extended the basis of a report between spectator and painted surface, as cleared by Sol Lewitt.

Since 1980 and his years in New York, Bruno Rousselot constantly and uncompromisingly supports the pictorial requirement which unites these artists, not without pleasure and derision. The practice of color constitutes the central vector of this work: vibrating, frankly juxtaposed, tones disperse outlines, locating abstraction so beyond any materiality. More exactly, the work of Bruno Rousselot plays with the border that separates the system of variation, which separates the insignificance of symbol with structural canons of abstraction, without limiting himself to it.

The recent series of painting on wood, which will form the centre of this new solo exhibition, is not therefore without reference to the pioneer painter of geometric abstraction, and the most "popular," Kasimir Malévitch.

Bruno Rousselot
At first sight it is clear that we are looking at abstract art. Stating the obvious however, is not really saying much. The history of abstract art over the century or so of its existence has been both rich and controversial. Perhaps the first question to ask ourselves is where this work is coming from: Malevitch or Rodchenko? Spiritualism or Materialism?
To find the answer, lets take a look at how Rousselot produces his work. It consists of a number of series, each one having its own title. In all, there are six series – Aurore, Concorde, Delta, Eclat, Fragmentation, Labyrinthe – and each one is recognisable by the recurring design presented. These designs are generally geometrical, relatively simple and each one explores a particular question. Each question is examined or rather experimented with, in a selection of paintings numbered in order of execution: Concorde 21, Concorde 22, etc. The different series were all produced over the same period of time, but this doesn’t stop each one having its own unique temporal evolution. One series may take a back seat, and then reappear later. At the same time another is undergoing a period of sustained and remarkable research.

In terms of his working methods, Rousselot’s art can be considered as a productive process and is thus more Materialist than Spiritualist. There is something of a rational exploration in his working methods, like some kind of scientific exploration. Here, we are far from Neo- Platonic intuition, flashes of inspiration, mystic or romantic flights of imagination... This is confirmed when we begin to examine the questions that are asked and explored. The idea is to understand how one’s vision of each painting works. How each meaning is developed, and how this takes place starting from a certain geometric composition or another. Shapes and counter-shapes: filled in or left empty. The dimensions of each shape must be taken into account (the positioning is also crucial, for here there is a whole aspect of in situ). We must also consider how the choice and juxtaposition of colours makes each piece vibrate. We only have to take a close look at each work to understand how important this is to Rousselot. Sometimes the colours are warm; sometimes they are cold. Sometimes the combination of colours is somewhat monotone; sometimes we are faced with a burst of colour and marked contrasts. There is also an effect produced by the succession of layers.

Bruno Rousselot paints using rollers. Starting from a monotone base, he accumulates layers of matter. This technique allows a little of the grain of the underlying layers to appear through the superior layers. It is also important to mention the wavering edges of each shape produced by the use of masking tape to delimit each form while painting. This is again crucial to the overall effect.

All of this careful experimentation in vision and sense, sets Rousselot apart, we could say isolates him from the work of his contemporaries. There is something ascetic about this work: so much patience is required that there is never any question of being part of a trend. There is also a kind of moral position: painting for the sake of painting. Understanding for the sake of understanding. There are no other reasons or criteria. In the present-day context, this is an admirable choice, one that is almost political in nature. In a world saturated by images, a little iconoclasm (in the strictest of senses), does a great deal of good.
F.C.