From the Pencil Area. Engineered patterns, meticulously mapped, mimic intricate vibrations that cross, sometimes repeat, collide and other times fade out. They create a visual of a pressed sound and similarly their rational forms can lead to bewilderment and resolution. 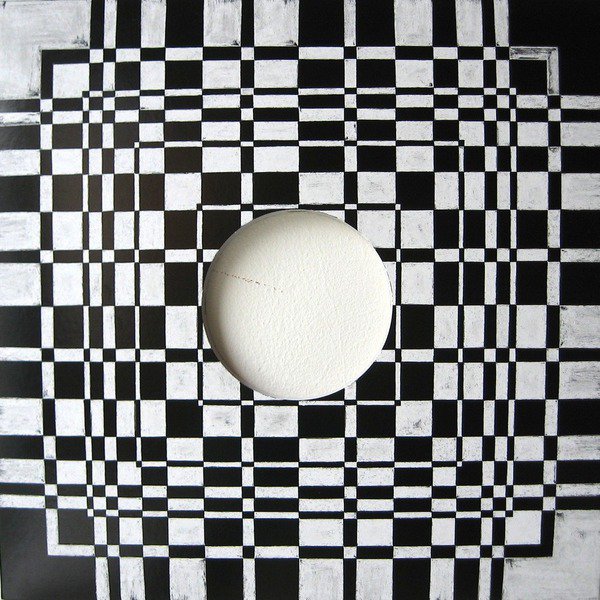 The Jack Hanley Gallery is pleased to present the fifth solo exhibition of work by Ajit Chauhan, From the Pencil Area. Through abstract construction, repetition and (flattened) movement Chauhan’s erased LP’s have materialized into something like “a plaid, hypnotized into a rhythm.” In previous series, the sanded flat works deconstructed the figure to experiment with a mass produced anonymity. Hair, eyes and limbs, the figurative was rendered abstract. The new body of work, however, imposes new forms onto the static LP’s through erasure.

The title is taken from the writer Robert Walser, who wrote in a condensed form called “micrograms” or “the pencil method.” He wrote poems and prose in this diminutive hand, the letters measuring a millimeter in height. Like Walser's tendency to favor the micro over the macro, Chauhan has similarly moved on to a higher form of abstraction.

Engineered patterns, meticulously mapped, mimic intricate vibrations that cross, sometimes repeat, collide and other times fade out. They create a visual of a pressed sound and similarly their rational forms can lead to bewilderment and resolution. In addition to the erased LP’s, the exhibition will include stamp drawings and completed puzzles, which also deal with the themes of structural rhythm, progression and movement. Within these works, formally, a multitude constitutes a singularity so the content of ephemera, residuals and repetition may breath through. Throughout the show, it is through the choice of materials, that the breaking down of forms is highlighted - a cascade of processes that go through distinct phases. The resonance remains firmly fixed on re-collections, not revelations.

Since Chauhan's last show with the gallery in 2009, his work has been exhibited at the UC Davis Museum, California, the Grimm Museum in Berlin, White Columns, the SONS Museum in Kruishoutem, Belgium, The Saatchi Gallery, London UK, and Meet Factory, The International Center for Contemporary Art in Prague.

For more information or images please contact Katie Schetlick at 646 918 6824 or Katie@jackhanley.com