The artist's work perfectly fits into the revival of figurative painting of the 80s, from realism or hyperrealism in the same vein as the New Leipzig School, to neo-expressionism in the tradition of Bad Painting. In the works exhibited loneliness is oppressive. 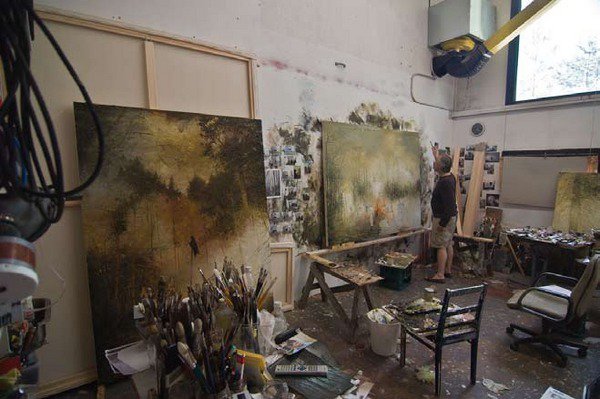 With the exhibition Jarmo Mäkilä, first retrospective exhibition of the Finnish artist in Paris, the Galerie Favardin & de Verneuil returns to the great figurative painting tradition of the Nordic and Germanic countries and pursues its approach and promotion of an art reactivating pathos with a new humanism in focus.

Jarmo Mäkilä perfectly fits into this revival of figurative painting of the 80s, from realism or hyperrealism in the same vein as the New Leipzig School, to neo-expressionism in the tradition of Bad Painting. Major artist of the land of the 1000 lakes, Jarmo Mäkilä exemplifies in this figurative way the « Artic Hysteria », famous expression from then on recognized by the eponymus exhibition at the Museum of Modern Art of New York in 2008.

Whereas the artist’s works is mostly autobiographical, its impact is nontheless universal in his reflection about good vs evil, his handling of infancy and memory, in its fantasised dimension shared by everyone.

In this works, loneliness is oppressive, where human beging in a Promethean vision is called in the guise of a new Adam nostalgic for the Lost Paradise. And if the forest is everywhere in the manner of Grimm’s fairytales, it’s the Primordial forest, in a sort of romanticism imbued with Naturphilosophie, the scene of pagan rituals, sacrifices and exorcisms staging kids in trance state. In this representation of a man suffering great turmoil and exorcizing his own terror against cosmos and the surrounding world, the artist questions with a somewhat hint of prophecy the place of human being in contemporary society and the price for humanism, pathos and the imaginary museum in an era of prevailing trick and virtuality.
- Laurent de Verneuil

Jarmo MÄKILÄ
Born in Rauma (Finland) in 1952, lives and work in Helsinki.
Jarmo Mäkilä’s career as a painter began in the politically turbulent 1970s. He studied at the University of Art and Design of Helsinki from 1970 to 1971 and at the Finnish Academy of Fine Arts until 1973. And from 1988 to 1994, he’s been teaching at the Finnish Academy of Fine Arts.
Having initially painted working-class subjects, in the 1980s Mäkilä moved his attention to the glossy worlds of consumption and popular culture. Combining media images with mythological motifs, the paintings made Mäkilä one of the foremost postmodern painters in Finland. In the 2000s Mäkilä has turned his gaze on himself. In 2002 he received the Pro Finlandia award.