From the Relative Truth to the Absolute Error! The argentinean collective unlock their labyrinth of errors through an appraisal of the triumph of failure. The group exploits the exhibition stage as a temporary platform for the International Errorism Movement that was established in 2005. 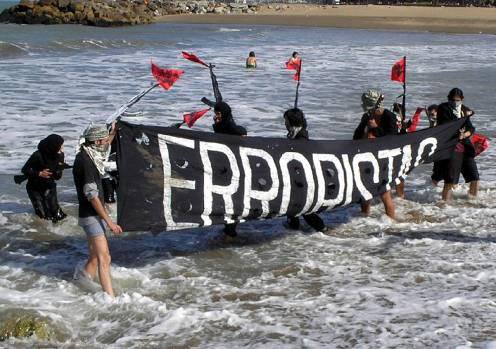 Join us at SMART Project Space for the exhibition From the Relative Truth to the Absolute Error by the Argentinean collective Etcetera... Resisting the passivity and skepticism of relativist postmodernism, Etcetera… unlock their labyrinth of errors through an appraisal of the triumph of failure. The group exploits the exhibition stage as a temporary platform for the International Errorism Movement that was established in 2005. The exhibition is in dialogue with Chto Delat?’s current Statement exhibition What is to be done between Tragedy and Farce?, as an integral concurrance of presentations. The exhibition incorporates Chto Delat?’s new film The Museum Songspiel: The Netherlands 20XX, recently co-produced by SMART Project Space and Van Abbe Museum, Eindhoven.

Using the visibility of the exhibition platform, associated conferences and workshops, Etcetera… disseminate the ideas of the International Errorist network. Their militant engagement invades the space of representation in favour of an occupation of space, generating a temporary propaganda dais. Traversing the global Errorist World Map (2011), contributions from members of the I.E and activity related to the social network internationalerrorist.org are demarcated in the form of video, photography, music and archival documents. The installation The Errorist Kabaret (2009), originally conceived for the 9th Istanbul Biennial curated by WHW collective in 2009, had found its inspiration in the Biennial’s title “What keeps mankind alive?” and is a pivotal work that relates to The Threepenny Opera written by Bertolt Brecht. The audience enters a Cabaret set, the theatre stage and tables are surrounded by several life-sized characters and some 30 paintings are hung on the walls. These characters are the 'gente armada', which means both 'armed' and 'constructed' people, representing distinct social stereotypes engrossed in a surreal twilight conversation regarding hope and desire. A bottle of wine, a teacup and a clown offer their commentary, creating a comedy of socio-political reality from an unconstrained, errorist perspective. The visitor, in all probability a consumer fearing failure or to be wrong, is now the protagonist, the spect-actor and potential errorist. The exhibition opens with a special Errorist Night – set in the Errorist Kabaret, an event with performances, music and screenings presented by Federico Zukerfeld and Loreto Guzman special guests include Lado Darakhvekidze, Sebastian Diaz Morales and others.

Formed in 1997 in Buenos Aires the group is composed of visual artists, poets, puppeteers and actors, most of who were under 20 at the time. They all shared the intention of bringing art to the site of immediate social conflict -the streets- and of bringing this conflict into arenas of cultural production, including the media and art institutions. Etcetera… worked closely with the human rights group H.I.J.O.S. (Children for Identity and Justice Against Forgetting and Silence) in developing and popularizing “escraches,” acts of public denunciation that seek a form of social justice not beholden to the state’s legal and judicial institutions. They often work with street art that is by nature ephemeral and circumstantial. They form part of the urban scene as a statement of protest, denunciation or signaling; and as a result it pertains to a specific time and place. In their practice, Etcetera… employ a great sense of humor, poetic discovery and all the destructuring potential they possess to forge a new kind of committed art: free of hackneyed rhetoric and often quite sarcastic and “incorrect”. The results of actions like “Mierdazo” , the big shit action organized in front of banks and government buildings immediately after the social crisis in Argentina in 2001 when the economy was devaluated, or “A COMER!” a kind of medieval guerrilla with enormous forkets are destined to persist in people’s memories. The installation Etcetera… Etcetera is an eclectic timeline anthology of the most relevant archive material (1998-2008) which includes documents of actions in public space, escraches, performances and installations, contextualizing the exhibition.

The International Errorist is an international organization that claims error as a philosophy of life. Today, errorism and its actions receive help from the international community, adding members, collectives and individuals around the world, spreading their practices and their philosophy, being satisfied with new autonomous cells of International Errorists that expand all over the world. The first errorist cells from the south were born from the protest which took place during the visit of George W. Bush for the Summit of the Americas in the city of Mar del Plata, Argentina in 2005. The term “Errorist” - decoupling the letter “t” from the word “terrorist”- refers to the so-called “Global War on Terror” that the Bush administration propagated. The otherwise prohibitive discussion of what “terror” constitutes today becomes carefree and possible through errorism. The movement considers the notion of error as a fundamental human condition in the capitalist world that eschews mistakes and failures.

Loreto Garín Guzmán (Chile) / Federico Zukerfeld (Argentina) are founders of the group Etcetera… at the end of 1997, together with other artists and activists. In 1998 they moved into the house-printing shop of the surrealist artist Juan Andralis, who in the 50s and 60s played an active role in the Paris group led by Breton. Etcetera… uses the premises as an art workshop and laboratory and during the 90s took part with artworks, manifestos and actions, in organizing “escraches” (a type of demonstration or sit-in in Argentina by activists seeking to denounce human-rights violators outside their homes) in the human-rights movement together with the H.I.J.O.S. group. In 2004, they participated in the “Ex-Argentina” in the Ludwig museum in Cologne. In 2005 “Collective Creativity” organized by WHW in Friedericianum museum, Kassel and “Far-Sites” curated by Adriano Pedrosa, InSite_05 in San Diego/Tijuana. In 2008 they took part in 8 Taipei Biennial in Taiwan, curators Vasif Kortun and Man Ray Hsu, 2009 Eleventh Istanbul Biennial in Turkey, curated by WHW, shown also in Linz (Cuvee Biennial), Rotterdam (MAMA showroom), Sicily (Palazzo Risso) and Vienna (Kunsthalle Exnergasse). In 2010 they curated the collective exhibition “Reciprocidad” (Reciprocity).